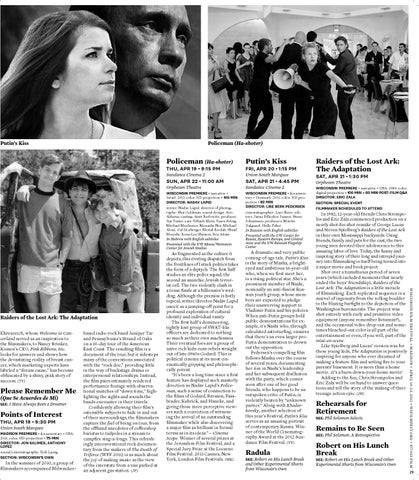 Ehrenreich, whose Welcome to Cancerland served as an inspiration to the ﬁlmmakers, to Nancy Brinker, Komen’s CEO, Pink Ribbons, Inc. looks for answers and shows how the devastating reality of breast cancer, which marketing experts have labeled a “dream cause,” has become obfuscated by a shiny, pink story of success. (TY)

Please Remember Me (Que Se Acuerdes de Mí) SEE: I Have Always Been a Dreamer

In the summer of 2010, a group of ﬁlmmakers accompanied Milwaukee-

based indie-rock band Juniper Tar and Pennsylvania’s Strand of Oaks on a 10-day tour of the American East Coast. The resulting ﬁlm is a document of the tour, but it sidesteps many of the conventions associated with the “rock doc,” providing little in the way of backstage drama or interpersonal relationships. Instead, the ﬁlm pairs intimately rendered performance footage with observational snatches of “down time,” highlighting the sights and sounds the bands encounter in their travels. Conﬁdently allowing their ﬁlm’s ostensible subjects to fade in and out of their surroundings, the ﬁlmmakers capture the feel of being on tour, from the offhand anecdotes of coffeeshop baristas to tadpoles in a stream to campﬁre sing-a-longs. This refreshingly unconventional rock documentary from the makers of The Death of Triforce (WFF 2011) is as much about the joy of making music as the view of the interstate from a van parked at an adjacent gas station. (JP)

As fragmented as the culture it depicts, this riveting dispatch from the frontlines of Israeli politics takes the form of a diptych. The ﬁrst half studies an elite police squad, the second an anarchic Jewish terrorist cell. The two violently clash in a tense ﬁnale at a billionaire’s wedding. Although the premise is hotly topical, writer/director Nadav Lapid uses it as a jumping-off point for a profound exploration of cultural identity and individual vanity. The ﬁrst half’s domineering, tightly knit group of SWAT-like ofﬁcers are dedicated to nothing so much as their own machismos. Their eventual foes are a group of naïve rich kids-cum-rebels straight out of late-1960s Godard. This is political cinema at its most cinematically gripping and philosophically potent. “It’s been a long time since a ﬁrst feature has displayed such masterly direction as Nadav Lapid’s Policeman, such a sense of connection to the ﬁlms of Godard, Bresson, Fassbinder, Kubrick, and Haneke, and giving those more perceptive viewers such a conviction of witnessing the arrival of an outstanding ﬁlmmaker while also discovering a major ﬁlm as brilliant in formal terms as in its ideas.” – Cinema Scope. Winner of several prizes at the Jerusalem Film Festival, and a Special Jury Prize at the Locarno Film Festival. 2011 Cannes, New York, London Film Festivals. (MK)

A dramatic and very public coming-of-age tale, Putin’s Kiss is the story of Masha, a brighteyed and ambitious 16-year-old who, when we ﬁrst meet her, is a rising political star. She’s a prominent member of Nashi, nominally an anti-fascist Russian youth group, whose members are expected to pledge their unswerving support to Vladimir Putin and his policies. When anti-Putin groups hold public demonstrations for example, it’s Nashi who, through calculated astroturﬁng, ensures that there’s an even larger proPutin demonstration to drown out the opposition. Pedersen’s compelling ﬁlm follows Masha over the course of several years, documenting her rise in Nashi’s leadership and her subsequent disillusion with the party, which comes soon after one of her good friends, who happens to be an outspoken critic of Putin, is violently beaten by “unknown parties.” Along with Khodorkovsky, another selection of this year’s Festival, Putin’s Kiss serves as an amazing portrait of contemporary Russia. Winner of the World Cinematography Award at the 2012 Sundance Film Festival. (TY)

Radula SEE: Robert on His Lunch Break and Other Experimental Shorts from Wisconsin’s Own

In 1982, 12-year-old friends Chris Strompolos and Eric Zala commenced production on a nearly shot-for-shot remake of George Lucas and Steven Spielberg’s Raiders of the Lost Ark in their own Mississippi backyards. Using friends, family and pets for the cast, the two young men devoted their adolescence to this amazing labor of love. Today, the funny and inspiring story of their long and intrepid journey into ﬁlmmaking is itself being turned into a major movie and book project. Shot over a tumultuous period of seven years (which included moments that nearly ended the boys’ friendship), Raiders of the Lost Ark: The Adaptation is a little miracle of ﬁlmmaking. Each replicated sequence is a marvel of ingenuity from the rolling boulder to the blazing barﬁght to the depiction of the Washington bureaucrats. The project was shot entirely with early and primitive video equipment (anyone remember Betamax?), and the occasional video drop-out and sometimes bleached-out color is all part of the entertainment or even, if you will, part of the misè-en-scene. Like Spielberg and Lucas’ version was for these young kids, The Adaptation is positively inspiring for anyone who ever dreamed of making a feature ﬁlm and setting ﬁre to your parents’ basement. It is more than a home movie…it’s a burn-down-your-home movie! Adding to the fun, Chris Strompolos and Eric Zala will be on hand to answer questions and tell the story of the making of their teenage action epic. (JH)

Remains to Be Seen SEE: Phil Solomon: A Retrospective

Raiders of the Lost Ark: The Adaptation