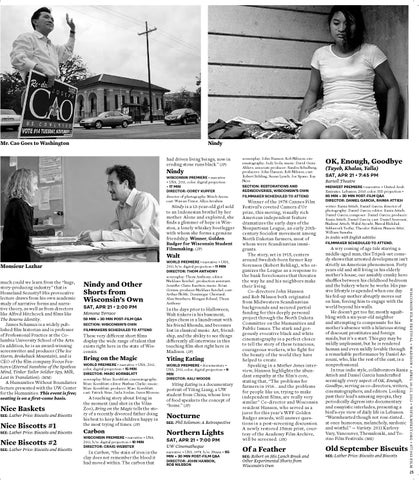 Nindy is a 13-year-old girl sold to an Indonesian brothel by her mother. Alone and exploited, she ﬁnds a glimmer of hope in Winston, a lonely whiskey bootlegger with whom she forms a genuine friendship. Winner, Golden Badger for Wisconsin Student Filmmaking. (JP)

These very different short ﬁlms display the wide range of talent that exists right here in the state of Wisconsin.

In the days prior to Halloween, Walt tinkers in his basement, plays chess in a laundromat with his friend Rhonda, and becomes lost in classical music. Art, friendship, and the ability to see things differently all intertwine in this touching ﬁlm shot right here in Madison. (JP)

Bring on the Magic

A touching story about living in the moment (and shot in the Vilas Zoo), Bring on the Magic tells the story of a recently divorced father doing his best to keep his children happy in the most trying of times. (JP)

Yiting Eating is a documentary portrait of Yiting Liang, a UW student from China, whose love of food speaks to the concept of “home.” (JP)

In Carbon, “the stain of iron in the clay does not remember the blood it had moved within. The carbon that

SECTION: RESTORATIONS AND REDISCOVERIES, WISCONSIN’S OWN

Winner of the 1978 Cannes Film Festival’s coveted Camera d’Or prize, this moving, visually rich American independent feature dramatizes the early days of the Nonpartisan League, an early 20thcentury Socialist movement among North Dakotan farmers, most of whom were Scandinavian immigrants. The story, set in 1915, centers around Swedish-born farmer Ray Sorenson (Robert Behling), who organizes the League as a response to the bank foreclosures that threaten the way he and his neighbors make their living. Co-directors John Hanson and Rob Nilsson both originated from Midwestern Scandinavian backgrounds and secured partial funding for this deeply personal project through the North Dakota Committee on the Humanities and Public Issues. The stark and gorgeously evocative black and white cinematography is a perfect choice to tell the story of these tenacious, courageous workers, who fight for the beauty of the world they have helped to create. Speaking in a Mother Jones interview, Hanson highlights the abundant empathy at the film’s core, stating that, “The problems for farmers in 1916… and the problems for people like us, trying to make independent films, are really very similar.” Co-director and Wisconsin resident Hanson, who served as a juror for this year’s WFF Golden Badger awards, will answer questions in a post-screening discussion. A newly restored 35mm print, courtesy of the Academy Film Archive, will be screened. (JH)

A wry coming of age tale starring a middle-aged man, this Tripoli-set comedy shows that arrested development isn’t strictly an American phenomenon. Forty years old and still living in his elderly mother’s house, our amiably cranky hero shufﬂes between his childhood bedroom and the bakery where he works. His passive lifestyle is upended when one day his fed-up mother abruptly moves out on him, forcing him to engage with the world beyond his walls. He doesn’t get too far, mostly squabbling with a six-year-old neighbor and attempting to compensate for his mother’s absence with a hilarious string of discount prostitutes and foreign maids, but it’s a start. This guy may be mildly unpleasant, but he is rendered human and even mildly lovable through a remarkable performance by Daniel Arzouni, who, like the rest of the cast, is a nonprofessional. In true indie style, collaborators Rania Attieh and Daniel Garcia handcrafted seemingly every aspect of OK, Enough, Goodbye, serving as co-directors, writers, cinematographers, and editors. Looking past their lead’s amusing myopia, they periodically digress into documentary and essayistic interludes, presenting a bird’s-eye view of daily life in Lebanon. “Warmhearted though not rose-tinted... at once humorous, melancholy, sardonic and wistful.” — Variety. 2011 Karlovy Vary, Vancouver, Thessaloniki, and Torino Film Festivals. (MK)

much could we learn from the “huge, story-producing industry” that is Homeland Security? His provocative lecture draws from his own academic study of narrative forms and narrative theory, as well as from directors like Alfred Hitchcock and ﬁlms like The Bourne Identity. James Schamus is a widely published ﬁlm historian and is professor of Professional Practice at the Columbia University School of the Arts. In addition, he is an award-winning screenwriter and producer (The Ice Storm, Brokeback Mountain), and is CEO of the ﬁlm company Focus Features (Eternal Sunshine of the Spotless Mind, Tinker Tailor Soldier Spy, Milk, Lost in Translation). (MM) A Humanities Without Boundaries lecture presented with the UW Center for the Humanities. This event is free; seating is on a ﬁrst-come basis.