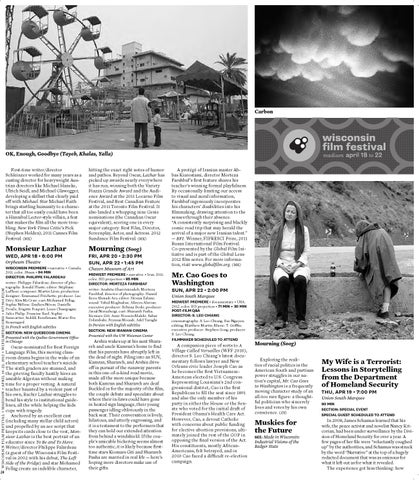 OK, Enough, Goodbye (Tayeb, Khalas, Yalla) First-time writer/director Schleinzer worked for many years as a casting director for heavyweight Austrian directors like Michael Haneke, Ulrich Seidl, and Michael Glawogger, developing a skillset that clearly paid off with Michael. Star Michael Fuith brings startling humanity to a character that all too easily could have been a Hannibal Lecter-style villain, a feat that makes the ﬁlm all the more troubling. New York Times Critic’s Pick (Stephen Holden); 2011 Cannes Film Festival. (MK)

hitting the exact right notes of humor and pathos. Beyond Oscar, Lazhar has picked up awards nearly everywhere it has run, winning both the Variety Piazza Grande Award and the Audience Award at the 2011 Locarno Film Festival, and Best Canadian Feature at the 2011 Toronto Film Festival. It also landed a whopping nine Genie nominations (the Canadian Oscar equivalent), scoring one in every major category: Best Film, Director, Screenplay, Actor, and Actress. 2012 Sundance Film Festival. (MK)

Oscar-nominated for Best Foreign Language Film, this moving classroom drama begins in the wake of an elementary school teacher’s suicide. The sixth graders are stunned, and the grieving faculty hastily hires an amiable Algerian without making time for a proper vetting. A natural teacher haunted by a violent past of his own, Bachir Lazhar struggles to bend his style to institutional guidelines, all the while helping the kids cope with tragedy. Anchored by an excellent cast (including many stellar child actors) and propelled by an ace script that keeps its cards close to the vest, Monsieur Lazhar is the best portrait of an educator since To Be and To Have. Writer/director Philippe Falardeau (a guest of the Wisconsin Film Festival in 2002 with his debut, The Left Side of the Fridge) and star Mohamed Fellag create an indelible character,

Presented with the UW Waisman Center

Arshia wakes up at his aunt Sharareh and uncle Kamran’s home to ﬁnd that his parents have abruptly left in the dead of night. Piling into an SUV, Kamran, Sharareh, and Arshia drive off in pursuit of the runaway parents in this one-of-a-kind road movie, made all the more unique because both Kamran and Sharareh are deaf. Buckled in for the majority of the ﬁlm, the couple debate and speculate about where their in-laws could have gone in heated sign language, their young passenger idling obliviously in the back seat. Their conversation is lively, hilarious, and utterly engrossing, and it is a testament to the performers that they can hold our extended attention from behind a windshield. If the couple’s amicable bickering seems almost too authentic, it is likely because ﬁrsttime stars Kiomars Giti and Sharareh Pasha are married in real life — here’s hoping more directors make use of their gifts.

A protégé of Iranian master Abbas Kiarostami, director Morteza Farshbaf’s ﬁrst feature shares his teacher’s winning formal playfulness. By occasionally limiting our access to visual and aural information, Farshbaf ingeniously incorporates his characters’ disabilities into his ﬁlmmaking, drawing attention to the senses through their absence. “A consistently surprising and blackly comic road trip that may herald the arrival of a major new Iranian talent.” — BFI. Winner, FIPRESCI Prize, 2011 Busan International Film Festival. Co-presented by the Global Film Initiative and is part of the Global Lens 2012 ﬁlm series. For more information, visit www.globalﬁlm.org. (MK)

A companion piece of sorts to A Village Called Versailles (WFF 2010), director S. Leo Chiang’s latest documentary follows lawyer and New Orleans civic leader Joseph Cao as he becomes the ﬁrst VietnameseAmerican elected to U.S. Congress. Representing Louisiana’s 2nd congressional district, Cao is the ﬁrst Republican to ﬁll the seat since 1891 and also the only member of his party in either the House or the Senate who voted for the initial draft of President Obama’s Health Care Act. However, Cao, a devout Catholic with concerns about public funding for elective abortion provisions, ultimately joined the rest of the GOP in opposing the ﬁnal version of the Act. His constituents, mostly AfricanAmericans, felt betrayed, and in 2010 Cao faced a difﬁcult re-election campaign.

Mourning (Soog) Exploring the realities of racial politics in the American South and partisan power struggles in our nation’s capital, Mr. Cao Goes to Washington is a frequently moving character study of an all-too rare ﬁgure: a thoughtful politician who sincerely lives and votes by his own conscience. (JH)

My Wife is a Terrorist: Lessons in Storytelling from the Department of Homeland Security

Muskies for the Future

In 2008, James Schamus learned that his wife, the peace activist and novelist Nancy Kricorian, had been under surveillance by the Division of Homeland Security for over a year. A few pages of her ﬁle were “reluctantly coughed up” by the authorities, and Schamus was struck by the word “Narrative” at the top of a hugely redacted document that was as ominous for what it left out as for what it revealed. The experience got him thinking: how

SEE: Made in Wisconsin: Industrial Visions of the Badger State