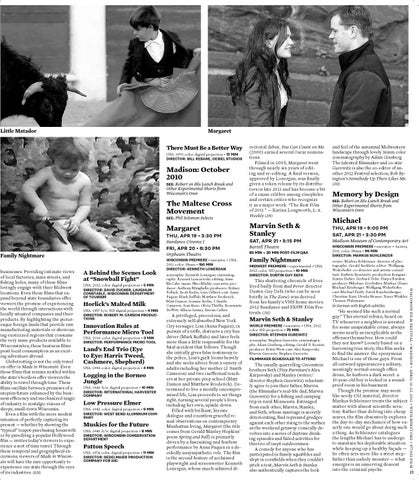 Madison: October 2010 SEE: Robert on His Lunch Break and Other Experimental Shorts from Wisconsin’s Own

Memory by Design SEE: Robert on His Lunch Break and Other Experimental Shorts from Wisconsin’s Own

A privileged, precocious, and extremely self-absorbed New York City teenager, Lisa (Anna Paquin), in pursuit of a triﬂe, distracts a city bus driver (Mark Ruffalo) and later feels more than a little responsible for the fatal accident that follows. Though she initially gives false testimony to the police, Lisa’s guilt looms heavily and she seeks advice from a variety of adults including her mother (J. Smith Cameron) and two ineffectual teachers at her private prep school (Matt Damon and Matthew Broderick). Determined to live a morally uncompromised life, Lisa proceeds to set things right, turning several people’s lives, including her own, upside down. Filled with brilliant, literate dialogue and countless graceful visual observations on contemporary Manhattan living, Margaret (the title comes from Gerald Manley Hopkins’ poem Spring and Fall) is primarily driven by a fascinating and fearless performance by Anna Paquin in a decidedly unsympathetic role. The ﬁlm is the second feature of acclaimed playwright and screenwriter Kenneth Lonergan, whose much-admired di-

This shattering chronicle of lives lived badly from Bad Fever director Dustin Guy Defa (who can be seen brieﬂy in The Zone) was derived from his family’s VHS home movies. 2012 Sundance and SXSW Film Festivals. (JH)

The usually quarrelling Greenstein brothers Seth (Tiny Furniture’s Alex Karpovsky) and Stanley (writer/ director Stephen Gurewitz) reluctantly agree to join their father, Marvin (the ﬁlmmaker’s real-life dad, Marvin Gurewitz) for a ﬁshing and camping trip in rural Minnesota. Estranged from each other, Marvin, Stanley, and Seth, whose marriage is secretly deteriorating, ﬁnd repressed grudges against each other rising to the surface as the weekend getaway comically devolves into a series of daytime drinking episodes and failed activities for this trio of inept outdoorsmen. A comedy for anyone who has participated in family squabbles and slept in cornﬁelds when they couldn’t pitch a tent, Marvin Seth &amp; Stanley also authentically captures the look

“He seemed like such a normal guy.” This eternal refrain, heard on TV whenever a neighbor is arrested for some unspeakable crime, always seems nearly as inexplicable as the offenses themselves. How could they not know? Loosely based on a harrowing true story, this ﬁlm seeks to ﬁnd the answer: the eponymous Michael is one of those guys. From all outward appearances a solitary, seemingly normal-enough ofﬁce drone, he harbors a dark secret: a 10-year-old boy is locked in a soundproof room in his basement. Though the premise may seem like seedy CSI material, director Markus Schleinzer treats the subject matter with almost scientiﬁc scrutiny. Rather than delving into cheap scares, the ﬁlm obsessively explores the day-to-day mechanics of how exactly one would go about doing such a thing. As Schleinzer catalogues the lengths Michael has to undergo to maintain his deplorable situation while keeping up a healthy façade — he often acts more like a strict stepfather than unholy monster — what emerges is an unnerving descent into the criminal psyche.

businesses. Providing intimate views of local factories, main streets, and ﬁshing holes, many of these ﬁlms lovingly engage with their Midwest locations. Even those ﬁlms that expand beyond state boundaries offer viewers the promise of experiencing the world through interactions with locally situated companies and their products. By highlighting the picturesque foreign lands that provide raw manufacturing materials or showcasing exoticized regions that consume the very same products available to Wisconsinites, these business ﬁlms posit local consumption as an exciting adventure abroad. Globetrotting is not the only travel on offer in Made in Wisconsin. Even those ﬁlms that remain nestled within the state’s borders offer viewers the ability to travel through time. These ﬁlms oscillate between promises of a utopian future enhanced by the business efﬁciency and mechanized magic of industry to nostalgic visions of sleepy, small-town Wisconsin. Even a ﬁlm with the more modest intention of perfectly capturing its present — whether by showing the “typical” teapot-purchasing housewife or by parodying a popular Hollywood ﬁlm — invites today’s viewers to experience a sort of time travel. Through these temporal and geographical excursions, viewers of Made in Wisconsin will have the rare opportunity to experience our state through the eyes of its industries. (KH)

and feel of the autumnal Midwestern landscape through lovely 16mm color cinematography by Adam Ginsberg. The talented ﬁlmmaker and co-star Gurewitz is also the co-editor of another 2012 Festival selection, Bob Byington’s Somebody Up There Likes Me.

rectorial debut, You Can Count on Me (2000) earned several Oscar nominations. Filmed in 2005, Margaret went through nearly six years of editing and re-editing. A ﬁnal version, approved by Lonergan, was ﬁnally given a token release by its distributors in late 2011 and has become a bit of a cause célèbre among cinephiles and certain critics who recognize it as a major work. “The Best Film of 2011.” — Karina Longworth, L.A. Weekly (JH)