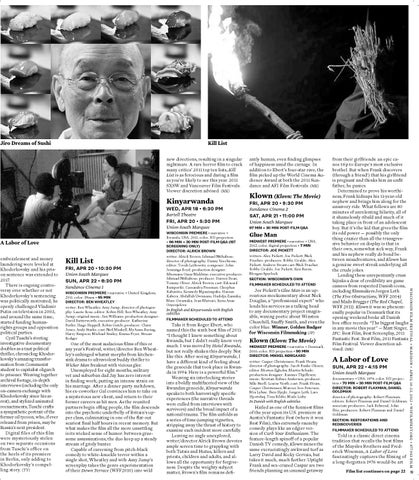 One of the most audacious ﬁlms of this or any year’s Festival, writer/director Ben Wheatley’s unhinged whatsit morphs from kitchensink drama to ultraviolent buddy thriller to Wicker Man freakout with vicious glee. Unemployed for eight months, military vet and suburban dad Jay has zero interest in ﬁnding work, putting an intense strain on his marriage. After a dinner party meltdown, his ex-coworker Gal convinces him to take on a mysterious new client, and return to their former careers as hit men. As the reunited partners begin ofﬁng people, the ﬁlm descends into the psychotic underbelly of Britain’s upper class, culminating in one of the ﬂat-out scariest ﬁnal half hours in recent memory. But what makes the ﬁlm all the more unsettling is its wicked sense of humor: between gruesome assassinations, the duo keep up a steady stream of grisly banter. Capable of careening from pitch-black comedy to white-knuckle terror within a single shot, Wheatley and wife Amy Jump’s screenplay takes the genre experimentation of their Down Terrace (WFF2010) into wild

Take it from Roger Ebert, who named this the sixth best ﬁlm of 2011: “I thought I knew something about Rwanda, but I didn’t really know very much. I was moved by Hotel Rwanda, but not really shaken this deeply. Not like this. After seeing Kinyarwanda, I have a different kind of feeling about the genocide that took place in Rwanda in 1994. Here is a powerful ﬁlm.” Weaving six interlocking stories into a boldly multifaceted view of the Rwandan genocide, Kinyarwanda speaks to both harrowingly speciﬁc experiences (the narrative threads were culled from interviews with survivors) and the broad impact of a national trauma. The ﬁlm unfolds as a series of time-jumping vignettes, stripping away the thrust of history to examine each incident more carefully. Leaving no angle unexplored, writer/director Alrick Brown devotes ample screen time to grappling with both Tutsis and Hutus, killers and priests, children and adults, and allows all the opportunity for forgiveness. Despite the weighty subject matter, Brown’s ﬁlm remains deﬁ-

Joe Pickett’s Glue Man is an uproarious mockumentary about Nick Douglas, a “professional expert” who lends his services as a talking head to any documentary project imaginable, waxing poetic about Winston Churchill, Snuffy Smith, and even the color blue. Winner, Golden Badger for Wisconsin Filmmaking (JP)

Hailed as one of the funniest ﬁlms of the year upon its U.S. premiere at Austin’s Fantastic Fest (where it won Best Film), this extremely raunchy comedy plays like an edgier version of Curb Your Enthusiasm. The feature-length spinoff of a popular Danish TV comedy, Klown mines the same excruciatingly awkward turf as Larry David and Ricky Gervais, but takes it much, much further. Uptight Frank and sex-crazed Caspar are two friends planning an unusual getaway

from their girlfriends: an epic canoe trip to Europe’s most exclusive brothel. But when Frank discovers (through a friend!) that his girlfriend is pregnant and thinks him an unﬁt father, he panics. Determined to prove his worthiness, Frank kidnaps his 11-year-old nephew and brings him along for the unsavory ride. What follows are 80 minutes of unrelenting hilarity, all of it shamelessly ribald and much of it taking place in front of an adolescent boy. But it’s the kid that gives the ﬁlm its odd power — possibly the only thing crazier than all the transgressive behavior on display is that in their own, somewhat sick way, Frank and his nephew really do bond between misadventures, and Klown has a genuine sweet streak underlying all the crude jokes. Lending these unrepentantly crass hijinks a dose of credibility are game cameos from respected Danish icons, including ﬁlmmakers Jørgen Leth (The Five Obstructions, WFF 2004) and Mads Brugger (The Red Chapel, WFF 2011). Klown it was so phenomenally popular in Denmark that its opening weekend broke all Danish box ofﬁce records. “The biggest laughs in any movie this year.” — Matt Singer, IFC. Best Film, Best Screenplay, 2011 Fantastic Fest. Best Film, 2011 Fantasia Film Festival. Viewer discretion advised. (MK)

Told in a classic direct cinema tradition that recalls the best ﬁlms of the Maysles Brothers and Frederick Wiseman, A Labor of Love fascinatingly captures the ﬁlming of a long-forgotten 1976 would-be art Film list continues on page 22

embezzlement and money laundering were leveled at Khodorkovsky and his prison sentence was extended to 2017. There is ongoing controversy over whether or not Khodorkovsky’s sentencing was politically motivated; he openly challenged Vladimir Putin on television in 2003, and around the same time, started funding humanrights groups and opposition political parties. Cyril Tuschi’s riveting investigative documentary doubles as a taut political thriller, chronicling Khodorkovsky’s amazing transformation from Communist student to capitalist oligarch to prisoner. Weaving together archival footage, in-depth interviews (including the only on-camera exchange with Khodorkovsky since his arrest), and stylized animated reenactments, Tuschi crafts a sympathetic portrait of the former oil tycoon, who, if ever released from prison, may be Russia’s next president. Digital files of this film were mysteriously stolen on two separate occasions from Tuschi’s office on the heels of its premiere in Berlin, only adding to Khodorkovsky’s compelling story. (TY)

A Labor of Love

antly human, even ﬁnding glimpses of happiness amid the carnage. In addition to Ebert’s four-star rave, the ﬁlm picked up the World Cinema Audience Award at both the 2011 Sundance and AFI Film Festivals. (MK)