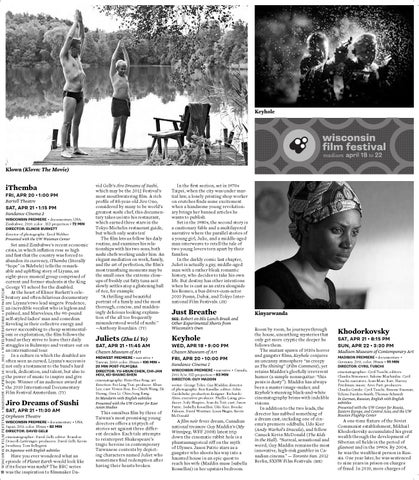 Set amid Zimbabwe’s recent economic crisis, in which inﬂation rose so high and fast that the country was forced to abandon its currency, iThemba (literally “hope” in Ndebele) tells the remarkable and uplifting story of Liyana, an eight-piece musical group comprised of current and former students at the King George VI school for the disabled. At the heart of Elinor Burkett’s celebratory and often-hilarious documentary are Liyana’s two lead singers: Prudence, an incredible vocalist who is legless and palsied, and Marvelous, the 90-pound self-styled ladies’ man and comedian. Reveling in their collective energy and never succumbing to cheap sentimentalism or exploitation, the ﬁlm follows the band as they strive to leave their daily struggles in Bulawayo and venture out on an international tour. In a culture in which the disabled are often seen as cursed, Liyana’s success is not only a testament to the band’s hard work, dedication, and talent, but also to the power of music to inspire and give hope. Winner of an audience award at the 2010 International Documentary Film Festival Amsterdam. (TY)

Have you ever wondered what an episode of Planet Earth would look like if its focus was sushi? The BBC series 18 was the inspiration to ﬁlmmaker Da-

In the ﬁrst section, set in 1970s Taipei, when the city was under martial law, a lonely printing shop worker on crutches ﬁnds some excitement when a handsome young revolutionary brings her banned articles he wants to publish. Set in the 1980s, the second story is a cautionary fable and a multilayered narrative where the parallel stories of a young girl, Julie, and a middle-aged man interweave to retell the tale of two young lovers torn apart by their families. In the darkly comic last chapter, Juliet is actually a gay, middle-aged man with a rather bleak romantic history, who decides to take his own life. But destiny has other intentions when he is cast as an extra alongside his Romeo, a bus driver-cum-actor. 2010 Pusan, Dubai, and Tokyo International Film Festivals. (JH)

vid Gelb’s Jiro Dreams of Sushi, which may be the 2012 Festival’s most mouthwatering ﬁlm. A rich proﬁle of 85-year-old Jiro Ono, considered by many to be world’s greatest sushi chef, this documentary takes us into his restaurant, which earned three stars in the Tokyo Michelin restaurant guide, but which only seats ten! The ﬁlm lets us follow his daily routine, and examines his relationships with his two sons, both sushi chefs working under him. An elegant mediation on work, family, and the art of perfection, the ﬁlm’s most transﬁxing moments may be the small ones: the extreme closeups of freshly cut fatty tuna as it slowly settles atop a glistening ball of rice, for example. “A thrilling and beautiful portrait of a family and the most thorough, concise, and maddeningly delicious looking explanation of the all too frequently misunderstood world of sushi.” —Anthony Bourdain. (TY)

This omnibus ﬁlm by three of Taiwan’s most promising young directors offers a triptych of stories set against three different decades. Each tale attempts to reinterpret Shakespeare’s tragic heroine in contemporary Taiwanese contexts by depicting characters named Juliet who sometimes ﬁnd redemption after having their hearts broken.

A ﬁlm noir fever dream, Canadian national treasure Guy Maddin’s (My Winnipeg, WFF 2008) latest trip down the cinematic rabbit hole is a phantasmagorical riff on the myth of Ulysses. Jason Patric stars as a gangster who shoots his way into a haunted house in an epic quest to reach his wife (Maddin muse Isabella Rossellini) in her upstairs bedroom.

Room by room, he journeys through the house, unearthing mysteries that only get more cryptic the deeper he follows them. The mutant spawn of 1930s horror and gangster ﬁlms, Keyhole conjures an uncanny atmosphere “as creepy as The Shining” (Film Comment), yet retains Maddin’s gleefully irreverent humor (a sample nonsequitur: “this penis is dusty”). Maddin has always been a master image-maker, and Keyhole’s stunning black-and-white cinematography brims with indelible visions. In addition to the two leads, the director has nabbed something of a dream cast, including one of cinema’s premiere oddballs, Udo Kier (Andy Warhol’s Dracula), and fellow Canuck Kevin McDonald (The Kids in the Hall). “Surreal, sensational and weird, Guy Maddin remains the most innovative, high-risk gambler in Canadian cinema.” — Toronto Sun. 2012 Berlin, SXSW Film Festivals. (MK)

A one-time ﬁxture of the Soviet Communist establishment, Mikhail Khodorkovsky accumulated his great wealth through the development of Siberian oil ﬁelds in the period of glasnost and in the 1990s. By 2004, he was the wealthiest person in Russia. One year later, he was sentenced to nine years in prison on charges of fraud. In 2010, more charges of