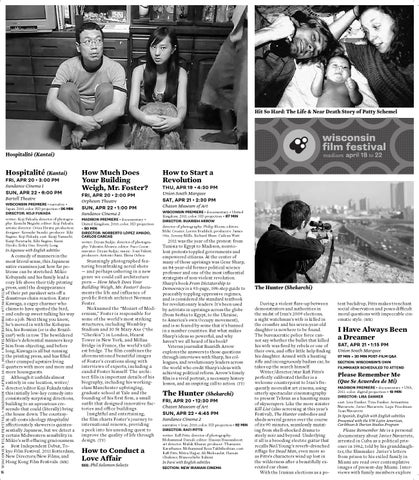 Hit So Hard: The Life &amp; Near Death Story of Patty Schemel

A comedy of manners in the most literal sense, this Japanese satire examines just how far politesse can be stretched. Mikio Kobayashi and his family lead a cozy life above their tidy printing press, until the disappearance of their pet parakeet sets off a disastrous chain reaction. Enter Kawaga, a cagey charmer who claims to have spotted the bird, and ends up sweet-talking his way into a job. Next thing you know, he’s moved in with the Kobayashis, his Bosnian (or is she Brazilian?) wife in tow. The bewildered Mikio’s deferential manners keep him from objecting, and before long, Kawaga is all but running the printing press, and has ﬁlled their cramped upstairs living quarters with more and more and more houseguests. Although it unfolds almost entirely in one location, writer/ director/editor Koji Fukada takes this initially low-key comedy into consistently surprising directions, building to an uproarious crescendo that could (literally) bring the house down. The courtesyat-all-costs ideology Hospitalité affectionately skewers is quintessentially Japanese, but we detect a certain Midwestern sensibility in Mikio’s self-effacing graciousness. Best Independent Debut, Tokyo Film Festival. 2011 Rotterdam, New Directors/New Films, and Hong Kong Film Festivals. (MK)

Stunningly photographed featuring breathtaking aerial shots — and perhaps ushering in a new genre we could call architecture porn — How Much Does Your Building Weigh, Mr. Foster? documents the life and influence of prolific British architect Norman Foster. Nicknamed the “Mozart of Modernism,” Foster is responsible for some of the world’s most striking structures, including Wembley Stadium and 30 St Mary Axe (“the “Gherkin”) in London, Hearst Tower in New York, and Millau Bridge in France, the world’s tallest bridge. The film combines the aforementioned beautiful images of Foster’s creations along with interviews of experts, including a candid Foster himself. The architect fills in important details of his biography, including his workingclass Manchester upbringing, graduate school at Yale and the founding of his first firm, a small outfit that designed innovative factories and office buildings. Insightful and entertaining, the film charts Foster’s journey to international renown, providing a peek into his unending quest to improve the quality of life through design. (TY)

How to Conduct a Love Affair SEE: Phil Solomon Selects

2011 was the year of the protest: from Tunisia to Egypt to Madison, nonviolent protests toppled governments and empowered citizens. At the center of many of those uprisings was Gene Sharp, an 84-year-old former political science professor and one of the most inﬂuential strategists of non-violent revolution. Sharp’s book From Dictatorship to Democracy is a 93-page, 198-step guide to peaceably toppling oppressive regimes, and is considered the standard textbook for revolutionary leaders. It’s been used by activists in uprisings across the globe (from Serbia to Egypt, to the Ukraine, to America’s own Occupy movement), and is so feared by some that it’s banned in a number countries. But what makes Sharp’s ideas so powerful, and why haven’t we all heard of his book? Veteran journalist Ruaridh Arrow explores the answers to those questions through interviews with Sharp, his colleagues, and revolutionary leaders across the world who credit Sharp’s ideas with achieving political reform. Arrow’s timely ﬁlm is a vivid portrait, a necessary history lesson, and an inspiring call to action. (TY)

The Hunter (Shekarchi) During a violent ﬂare-up between demonstrators and authorities in the midst of Iran’s 2009 elections, a night watchman’s wife is killed in the crossﬁre and his seven-year-old daughter is nowhere to be found. The bureaucratic police force cannot say whether the bullet that killed his wife was ﬁred by rebels or one of their own, and offer little help ﬁnding his daughter. Armed with a hunting riﬂe and incongruously badass car, he takes up the search himself. Writer/director/star Raﬁ Pitts’s perfectly calibrated thriller is a welcome counterpoint to Iran’s frequently neorealist art cinema, using utterly spectacular cinematography to present Tehran as a haunting maze of skyscrapers. Like the more sinister Kill List (also screening at this year’s Festival), The Hunter embodies and sheds several genres over the course of its 90 minutes, seamlessly mutating from shell-shocked drama to steely noir and beyond. Underlying it all is a brooding electric guitar that recalls Neil Young’s reverb-drenched riffage for Dead Man, even more so as Pitts’s characters wind up lost in the wilderness after a beautifully executed car chase. With the Iranian elections as a po-

Please Remember Me is a personal documentary about Javier Navarrete, arrested in Cuba as a political prisoner in 1962, told by his granddaughter, the ﬁlmmaker. Javier’s letters from prison to his exiled family in Miami are read over contemplative images of present-day Miami. Interviews with family members explore