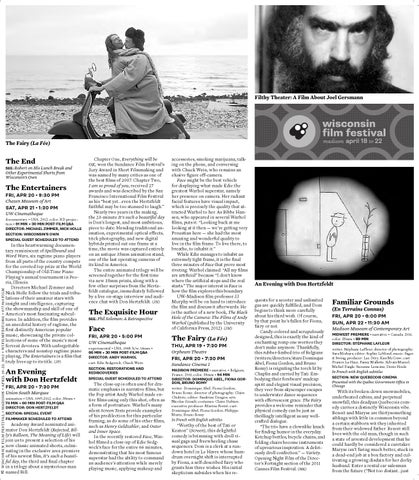 The End SEE: Robert on His Lunch Break and Other Experimental Shorts from Wisconsin’s Own

In this heartwarming documentary reminiscent of Spellbound and Word Wars, six ragtime piano players from all parts of the country compete for the coveted top prize at the World Championship of Old-Time Piano Playing’s annual tournament in Peoria, Illinois. Directors Michael Zimmer and Nick Holle follow the trials and tribulations of their amateur stars with insight and intelligence, capturing the showmanship and skill of one of America’s most fascinating subcultures. In addition, the ﬁlm provides an anecdotal history of ragtime, the ﬁrst distinctly American popular music, showcasing the private collections of some of the music’s most fervent devotees. With unforgettable characters and nonstop ragtime piano playing, The Entertainers is a ﬁlm that truly lives up to its title. (JP)

Academy Award nominated animator Don Hertzfeldt (Rejected, Billy’s Balloon, The Meaning of Life) will join us to present a selection of his now classic animated shorts, culminating in the exclusive area premiere of his newest ﬁlm, It’s such a beautiful day, the third and ﬁnal chapter in a trilogy about a mysterious man 12 named Bill.

Chapter One, Everything will be OK, won the Sundance Film Festival’s Jury Award in Short Filmmaking and was named by many critics as one of the best ﬁlms of 2007. Chapter Two, I am so proud of you, received 27 awards and was described by the San Francisco International Film Festival as his “best yet...even the Hertzfeldt faithful may be too stunned to laugh.” Nearly two years in the making, the 23-minute It’s such a beautiful day is Don’s longest, and most ambitious, piece to date: blending traditional animation, experimental optical effects, trick photography, and new digital hybrids printed out one frame at a time, the movie was captured entirely on an antique 35mm animation stand, one of the last operating cameras of its kind in America. The entire animated trilogy will be screened together for the ﬁrst time via new 35mm prints, along with a few other surprises from the Hertzfeldt catalogue, immediately followed by a live on-stage interview and audience chat with Don Hertzfeldt. (JH)

The close-up is often used for dramatic emphasis in narrative ﬁlms, but the Pop artist Andy Warhol made entire ﬁlms using only this shot, often as a form of portraiture. Warhol’s many silent Screen Tests provide examples of his predilection for this particular framing, as do some of his other ﬁlms, such as Henry Geldzahler, and Outer and Inner Space. In the recently restored Face, Warhol ﬁlmed a close-up of Edie Sedgwick’s face for the entire 66 minutes, demonstrating that his most famous superstar had the ability to command an audience’s attention while merely playing music, applying makeup and

accessories, smoking marijuana, talking on the phone, and conversing with Chuck Wein, who remains an elusive ﬁgure off-camera. Face might be the best vehicle for displaying what made Edie the greatest Warhol superstar, namely her presence on camera. Her radiant facial features have visual impact, which is precisely the quality that attracted Warhol to her. As Bibbe Hansen, who appeared in several Warhol ﬁlms, puts it: “Looking back at me looking at it then — we’re getting very Proustian here — she had the most amazing and wonderful quality to live in the ﬁlm frame. To live there, to breathe, to inhabit it.” While Edie manages to inhabit an extremely tight frame, it is the ﬁnal three minutes of Face that prove most riveting. Warhol claimed: “All my ﬁlms are artiﬁcial” because “I don’t know where the artiﬁcial stops and the real starts.” The major interest in Face is how the ﬁlm explores this boundary. UW-Madison ﬁlm professor JJ Murphy will be on hand to introduce the ﬁlm and discuss it afterwards. He is the author of a new book, The Black Hole of the Camera: The Films of Andy Warhol (published by the University of California Press, 2012). (JM)

“Worthy of the best of Tati or Keaton” (Screen), this delightful comedy is brimming with droll visual gags and freewheeling chase sequences. Dom is a clerk at a rundown hotel in Le Havre whose humdrum overnight shift is interrupted by Fiona, a self-described fairy who grants him three wishes. His initial skepticism subsides when his re-

An Evening with Don Hertzfeldt quests for a scooter and unlimited gas are quickly fulﬁlled, and Dom begins to think more carefully about his third wish. Of course, by that point he’s fallen for Fiona, fairy or not. Candy-colored and scrupulously designed, this is exactly the kind of enchanting romp one worries they don’t make anymore. Thankfully, this rubber-limbed trio of Belgians (writers/directors/stars Dominque Abel, Fiona Gordon, and Bruno Romy) is reigniting the torch lit by Chaplin and carried by Tati. Embodying their forebears’ madcap spirit and elegant visual precision, they veer from skyscraper escapes to underwater dance sequences with effervescent grace. The Fairy provides a welcome reminder that physical comedy can be just as thrillingly intelligent as any wellcrafted dialogue. “The trio have a clownlike knack for ﬁnding humor in the everyday. Ketchup bottles, bicycle chains, and folding chairs become instruments of uproarious inspiration. A deliriously droll confection.” — Variety. Opening Night Film of the Director’s Fortnight section of the 2011 Cannes Film Festival. (MK)

With its broken-down snowmobiles, underheated cabins, and perpetual snowfall, this deadpan Quebecois comedy carries a distinctly Wisconsin vibe. Benoit and Maryse are thirtysomething siblings with little in common beyond a certain stubborn wit they inherited from their widowed father. Benoit still lives with the old man, though in such a state of arrested development that he could hardly be considered a caretaker. Maryse isn’t faring much better, stuck in a dead-end job at a box factory and cultivating a growing disdain for her dorky husband. Enter a rental car salesman from the future (“Not too distant...just