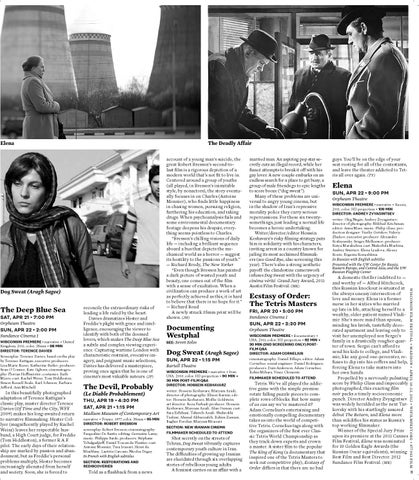 In this beautifully photographed adaptation of Terence Rattigan’s classic play, master director Terence Davies (Of Time and the City, WFF 2009) makes his long-awaited return to narrative ﬁlmmaking. Hester Collyer (magniﬁcently played by Rachel Weisz) leaves her respectable husband, a High Court judge, for Freddie (Tom Hiddleston), a former R.A.F. pilot. The early days of their relationship are marked by passion and abandonment, but as Freddie’s personal problems multiply, Hester becomes increasingly alienated from herself and society. Soon, she is forced to

reconcile the extraordinary risks of leading a life ruled by the heart. Davies dramatizes Hester and Freddie’s plight with grace and intelligence, encouraging the viewer to identify with both of the doomed lovers, which makes The Deep Blue Sea a subtle and complex viewing experience. Capturing wartime London with characteristic restraint, evocative imagery, and poignant music selections, Davies has delivered a masterpiece, proving once again that he is one of cinema’s most valuable auteurs. (JP)

Told as a ﬂashback from a news

Shot secretly on the streets of Tehran, Dog Sweat vibrantly captures contemporary youth culture in Iran. The difﬁculties of growing up Iranian are elucidated through six overlapping stories of rebellious young adults. A feminist carries on an affair with a

married man. An aspiring pop star secretly cuts an illegal record, while her ﬁancé attempts to break it off with his gay lover. A new couple embarks on an endless search for a place to get busy; a group of male friends go to epic lengths to score booze (“dog sweat”). Many of these problems are universal to angry young cinema, but in the shadow of Iran’s repressive morality police they carry serious repercussions. For these six twentysomethings, just leading a normal life becomes a heroic undertaking. Writer/director/editor Hossein Keshavarz’s risky ﬁlming strategy puts him in solidarity with his characters, inviting arrest in a country known for jailing its most acclaimed ﬁlmmakers (see Good Bye, also screening this year). There’s also a strong aesthetic payoff: the clandestine camerawork infuses Dog Sweat with the urgency of cinéma vérité. Grand Jury Award, 2011 Austin Film Festival. (MK)

Tetris. We’ve all played the addictive game with the simple premise: rotate falling puzzle pieces to complete rows of blocks. But how many of us can say we’ve mastered it? Adam Cornelius’s entertaining and emotionally compelling documentary takes us into the world of competitive Tetris. Cornelius tags along with the organizers of the ﬁrst ever Classic Tetris World Championship as they track down experts and crown a master. A sister ﬁlm to the popular The King of Kong (a documentary that inspired one of the Tetris Masters to seek out competitive play), Ecstasy of Order differs in that there are no bad

guys. You’ll be on the edge of your seat rooting for all of the contestants, and leave the theater addicted to Tetris all over again. (TY)

A domestic thriller indebted to — and worthy of — Alfred Hitchcock, this Russian knockout is situated at the always uneasy intersection of love and money. Elena is a former nurse in her sixties who married up late in life, attaching herself to a wealthy, older patient named Vladimir. She’s more maid than spouse, minding his lavish, tastefully decorated apartment and leaving only to visit her unemployed son Sergei’s family in a drastically rougher quarter of town. Sergei can’t afford to send his kids to college, and Vladimir, like any good one-percenter, refuses to dip into his coffers and help, forcing Elena to take matters into her own hands. Propelled by a nervously pulsating score by Philip Glass and impeccably photographed, this exacting ﬁlm noir packs a timely socioeconomic punch. Director Andrey Zvyagintsev was widely heralded as the next Tarkovsky with his startlingly assured debut The Return, and Elena more than solidiﬁes his status as Russia’s top working ﬁlmmaker. Winner of the Special Jury Prize upon its premiere at the 2011 Cannes Film Festival, Elena was nominated for 10 Golden Eagle Awards (the Russian Oscar equivalents), winning Best Film and Best Director. 2012 Sundance Film Festival. (MK)

account of a young man’s suicide, the great Robert Bresson’s second-tolast ﬁlm is a rigorous depiction of a modern world that’s not ﬁt to live in. Centered around a group of youths (all played, in Bresson’s inimitable style, by nonactors), the story eventually focuses in on Charles (Antoine Monnier), who ﬁnds little happiness in chasing women, pursuing religion, furthering his education, and taking drugs. When psychoanalysis fails and some environmental documentary footage deepens his despair, everything seems pointless to Charles. “Bresson’s chilling visions of daily life — including a brilliant sequence aboard a bus that depicts the mechanical world as a horror — suggest its hostility to the passions of youth.” — Richard Brody, The New Yorker “Even though Bresson has painted a dark picture of wasted youth and beauty, one comes out of the ﬁlm with a sense of exultation. When a civilization can produce a work of art as perfectly achieved as this, it is hard to believe that there is no hope for it.” — Richard Roud A newly struck 35mm print will be shown. (JH)