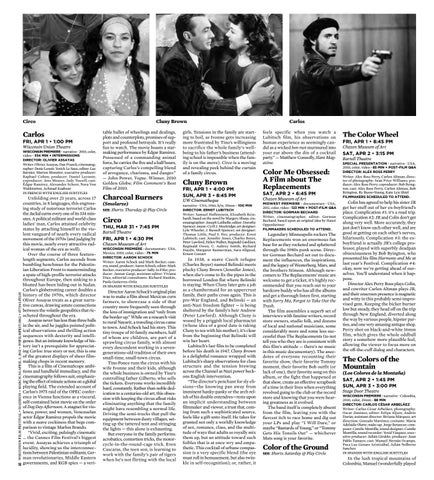 Unfolding over 21 years, across 17 countries, in 8 languages, this engrossing study of notorious terrorist Carlos the Jackal earns every one of its 334 minutes. A political militant and world-class ladies’ man, Carlos attained celebrity status by attaching himself to the violent vanguard of nearly every radical movement of the 1970s (and judging by this movie, nearly every attractive radical woman of the era as well). Over the course of three featurelength segments, Carlos ascends from bumbling henchman for the Palestinian Liberation Front to masterminding a spate of high-profile terrorist attacks throughout Europe, then sinking to a bloated has-been hiding out in Sudan. Carlos’s globetrotting career doubles a history of the 1970s, which director Oliver Assayas treats as a great narrative canvas, drawing astute connections between the volatile geopolitics that ricocheted throughout the era. Assayas never has less than three balls in the air, and he juggles pointed political observations and thrilling action sequences with dexterity and intelligence. But an intimate knowledge of history isn’t a prerequisite for appreciating Carlos: true story or not, this is one of the greatest displays of sheer filmmaking chops in recent memory. This is a film of CinemaScope ambitions and handheld immediacy, and the cinematography follows suit, emphasizing the effect of minute actions on a global playing field. The extended account of Carlos’s 1975 raid of the OPEC conference in Vienna functions as a visceral, self-contained heist movie on the order of Dog Day Afternoon. A magnet for violence, power, and women, Venezuelan actor Édgar Ramírez propels the movie with a suave cockiness that begs comparison to vintage Marlon Brando. “Vivid, exciting, pulsingly cinematic ... the Cannes Film Festival’s biggest event. Assayas achieves a triumph of lucidity, showing us the interconnections between Palestinian militants, German revolutionaries, Middle Eastern 10 governments, and KGB spies — a veri-

Director Aaron Schock’s original plan was to make a film about Mexican corn farmers, to showcase a side of that country more frequently seen through the lens of immigration and “only from the border up.” While on a research visit to rural Nayarit, a traveling circus came to town. And Schock had his story. This tiny troupe of 10 family members, half of whom are children, are part of a sprawling circus family, with almost every descendent working in a sevengenerations-old tradition of their own small-time, small-town circus. Tino Ponce runs the circus with his wife Ivonne and their kids, although the whole business is owned by Tino’s controlling father Gilberto, who sells the tickets. Everyone works incredibly hard, constantly. Rather than noble dedication to a centuries-old art, this obsession with keeping the circus afloat risks eliminating anything that the family might have resembling a normal life. Driving the semi-trucks that pull the equipment between dusty villages, setting up the tattered tent and stringing the lights — this alone is exhausting. But everyone in the family performs: acrobatics, contortion tricks, the motorcycle-in-the-round-cage trick. Even Cascaras, the teen son, is learning to work with the family’s pair of tigers when he’s not flirting with the local

girls. Tensions in the family are starting to boil, as Ivonne gets increasing more frustrated by Tino’s willingness to sacrifice the whole family’s wellbeing to his father’s business (attending school is impossible when the family is on the move). Circo is a moving and revealing peek behind the curtain of a family circus.

In 1938, a suave Czech refugee (Charles Boyer) named Belinski meets plucky Cluny Brown (Jennifer Jones), when she’s come to fix the pipes in the borrowed London flat where Belinski is staying. When Cluny later gets a job as a chambermaid for an uppercrust family, their paths cross again. This is pre-War England, and Belinski — an anti-Nazi freedom fighter — is being sheltered by the family’s heir Andrew (Peter Lawford). Although Cluny is wooed by a priggish local pharmacist (whose idea of a good date is taking Cluny to tea with his mother), it’s clear from the beginning that Belinski will win her heart. Lubitsch’s last film to be completed before his death in 1947, Cluny Brown is a delightful romance wrapped with Lubitsch’s sharp observations for class structure and the tension brewing across the Channel as Nazi power beckons English intervention. “The director’s penchant for sly elisions—the knowing pan away from imminent hanky-panky or the arch relish of his double entendres—rests upon an implicit understanding between filmmaker and viewer, a trust that, coming from such a sophisticated source, feels like a gift unto itself. He takes for granted not only a worldly knowledge of sex, romance, class, and the multitude of ways that adults so royally mix them up, but an attitude toward such foibles that is at once wry and empathetic. This cocktail of urbane compassion is a very specific blend (the eye must roll in bemusement, but also twinkle in self-recognition); or, rather, it

Carlos feels specific when you watch a Lubitsch film, his observations on human experience as seemingly candid as a wicked bon mot murmured into your ear above the din of a cocktail party.” — Matthew Connolly, Slant Magazine.

Legendary Minneapolis rockers The Replacements won an enormous fan base for as they rocketed and spluttered through the 1980s punk scene. Director Gorman Bechard set out to document the influences, the inspirations, and the legacy of Westerberg, Mars, and the brothers Stinson. Although newcomers to The Replacements’ music are welcome to get a ticket, it’s highly recommended that you reach out to your hardcore buddy who has all the albums and get a thorough listen first, starting with Sorry Ma, Forgot to Take Out the Trash. The film assembles a superb set of interviews with fanzine writers, record store owners, studio folk, and dozens of local and national musicians, some considerably more and some less successful than The Replacements (to not tell you who they are is consistent with this film’s attitude — there’s no music in this music documentary). The anecdotes of everyone recounting their favorite show, their favorite Tommy moment, their favorite Bob outfit (or lack of one), their favorite song on this album, or the fight that happened at that show, create an effective scrapbook of a time in their lives when everything revolved going to the club or the record store and knowing that you were hearing greatness as it evolved. The band itself is completely absent from the film, leaving you with the fiercest itch to race home and dig out your LPs and play “I Will Dare,” or maybe “Bastards of Young,” or “Tommy Gets His Tonsils Out” — whichever Mats song is your favorite.

Colin has agreed to help his sister JR get her stuff out of her ex-boyfriend’s place. Complication #1: it’s a road trip. Complication #2: JR and Colin don’t get along very well. More accurately, they just don’t know each other well, and are good at getting on each other’s nerves, hilariously. Complication #3: the exboyfriend is actually JR’s college professor, played with superbly deadpan obnoxiousness by Bob Byington, who presented his film Harmony and Me at last year’s Festival. Complication #4: okay, now we’re getting ahead of ourselves. You’ll understand when it happens. Director Alex Perry Ross plays Colin, and cowriter Carlen Altman plays JR, and their onscreen presence is magnetic and witty in this probably semi-improvised gem. Keeping the bicker burner low but steady, they head off on the trip through New England, diverted along the way by various people, hipster parties, and one very amusing antique shop. Perry shot on black-and-white 16mm film, which gives the whole oddball story a somehow more plausible feel, allowing the viewer to focus more on the off-the-cuff dialog and characters.

Color of the Ground

In the lush tropical mountains of Colombia, Manuel (wonderfully played