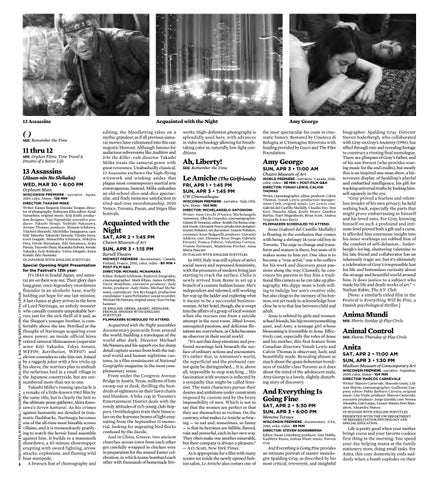 It’s 1844 in feudal Japan, and samurai are on their way out. Their glory days long gone, once-legendary swordsmen flounder in an alcoholic haze, warily holding out hope for one last mission. A last chance at glory arrives in the form of Lord Naritsugu, an unholy monster who casually commits unspeakable horrors just for the sick thrill of it and, as the Shogun’s younger brother, is comfortably above the law. Petrified at the thought of Naritsugu acquiring even more power, an inside official hires retired samurai Shinzaemon (superstar actor Kôji Yakusho, Tokyo Sonata, WFF09; Retribution, WFF07) and eleven comrades to take him out. Joined by a raggedy joker with a few tricks up his sleeve, the warriors plan to ambush the nefarious lord in a small village in the Japanese countryside, but are outnumbered more than ten to one. Takashi Miike’s rousing spectacle is a remake of a little-known 1963 film by the same title, but is clearly the heir to the ultimate posse-gatherer, Akira Kurosawa’s Seven Samurai. As his crimes against humanity are detailed in traumatic flashbacks, Naritsugu becomes one of the all-time most hissable screen villains, and it is tremendously gratifying to watch the heroic band assemble against him. It builds to a mammoth showdown, a 45-minute showstopper erupting with sword fighting, arrow attacks, explosions, and flaming wild boar stampede. A bravura feat of choreography and 6

Acquainted with the Night editing, the bloodletting takes on a mythic grandeur, as if all previous samurai movies have culminated into this one majestic blowout. Although famous for audacious subversions like Audition and Ichi the Killer, cult director Takashi Miike treats the samurai genre with great reverence. Unabashedly classical, 13 Assassins eschews the high-flying wirework and winking asides that plague most contemporary martial arts extravaganzas. Instead, Miike unleashes an old-school slice-and-dice spectacular, and finds immense satisfaction in tried-and-true swordsmanship. 2010 Venice, Toronto, Pusan, and Sitges film festivals.

the most spectacular fur coats in cinematic history. Restored by Cineteca di Bologna at L’Immagine Ritrovata with funding provided by Gucci and The Film Foundation.

IN ITALIAN WITH ENGLISH SUBTITLES

In 1955, Italy was still a place of strict social mores and repressed femininity, with the pressures of modern living just starting to crack the surface. Clelia is newly arrived from Rome to set up a branch of a couture fashion house. She’s independent and talented, still working her way up the ladder and exploring what it means to be a successful businesswoman. At her hotel, though, she is swept into the affairs of a group of local women when she rescues one from a suicide attempt in the next room. Jilted lovers, unrequited passions, and delicious flirtations are everywhere, as Clelia becomes an observer in their social world. “It’s not that deep emotions and profound meanings lurk beneath the surface of ordinary actions and encounters. It’s rather that, in Antonioni’s world, the superficial and the profound cannot quite be distinguished.... It is, above all, impossible to stop watching.... His fascination with women is inflected by a sympathy that might be called feminist. The main characters pursue their desires and ambitions under constraints imposed by custom and by the brute impossibility of men. Which is not to say that the women are perfect or that they see themselves as victims. On the contrary, what makes Le Amiche so bracing — so sad and, sometimes, so funny — is that its heroines are fallible, flawed, vain and powerful, each in her own way. They often make one another miserable, but their company is always a pleasure.” — A.O. Scott, New York Times. As is appropriate for a film with many scenes set inside the newly opened fashion salon, Le Amiche also costars one of

Acquainted with the Night assembles documentary postcards from around the world, building a travelogue of the world after dark. Director Michael McNamara and his superb eye for sharp detail capture scenes from both the natural world and human nighttime customs, in a film reminiscent of National Geographic magazine in the most complementary sense. From under the Congress Avenue Bridge in Austin, Texas, millions of bats swoop out at dusk, thrilling the hundreds of sightseers on their lawn chairs and blankets. A bike cop in Toronto’s Entertainment District deals with the rowdy attitudes of rich young club-hoppers. Ornithologists train their binoculars on the fearsome beams of light emanating from the September 11 memorial, looking for migrating bird flocks confused by the dazzle. And in Chios, Greece, two ancient churches across town from each other get carefully wrapped in chicken wire in preparation for the annual Easter celebration, in which teams bombard each other with thousands of homemade fire-

Jesse (Gabriel del Castillo Mullally) is floating in the confusion that comes with being a shrimpy 14-year-old boy in Toronto. The urge to change and transform and mature is there, but none of it makes sense to him yet. One idea is to become a “true artist,” one who suffers for his work and discovers great passions along the way. Clumsily, he convinces his parents to buy him a traditional film camera so he can take up photography. His dippy mom is both willing to indulge her son’s creative side, but also clings to the memory of his boyness, not yet ready to acknowledge how close he is to that line between child and adult. Jesse is orbited by girls and women: school friends, his hip twentysomething aunt, and Amy, a teenage girl whose blossoming is irresistible to Jesse. Effectively cast, especially the roles of Jesse and his mother, this first feature from Canadian directors Yonah Lewis and Calvin Thomas is observant, lush, and beautifully made. Revealing almost as much about the quasi-bohemian trendiness of middle-class Toronto as it does about the mind of the adolescent male, Amy George is a lovely, slightly disturbing story of discovery.

biographer: Spalding Gray. Director Steven Soderbergh, who collaborated with Gray on Gray’s Anatomy (1996), has sifted through rare and revealing footage to construct a riveting final monologue. There are glimpses of Gray’s father, and of his son Forrest (who provides soaring music for the end credits), but mostly this is an inspired one-man show, a bittersweet display of Spalding’s playful and embattled intelligence, his gift for tracking universal truths by looking himself squarely in the eye. “Gray proved a fearless and relentless invader of his own privacy; he held nothing back, especially the parts that might prove embarrassing to himself and his loved ones. For Gray, knowing himself on such a profound and intimate level proved both a gift and a curse. It afforded him enormous insight into his inner workings yet robbed him of the comfort of self-delusion... Soderbergh’s loving, shattering valentine to his late friend and collaborator has an inherently tragic arc, but it’s ultimately a celebration of Gray’s irrepressible lust for life and bottomless curiosity about the strange and beautiful world around him. It does justice to a subject who made his life and death works of art.” — Nathan Rabin, The A.V. Club. [Note: a similarly titled film in the Festival is Everything Will Be Fine, a Danish psychological thriller.]

And Everything Is Going Fine

IN SPANISH WITH ENGLISH SUBTITLES PRESENTED WITH THE UW DEPARTMENT OF REHABILITATION PSYCHOLOGY AND SPECIAL EDUCATION.

And Everything is Going Fine provides an intimate portrait of master monologist Spalding Gray, as described by his most critical, irreverent, and insightful

Life is pretty good when your mother brings cocoa and your favorite cookies first thing in the morning. You spend your day helping mama at the family stationery store, doing small tasks. For Anita, this cozy domesticity ends suddenly when a bomb explodes on their