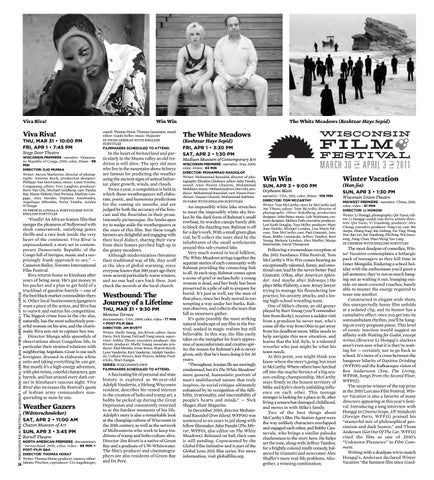 IN SWISS GERMAN WITH ENGLISH SUBTITLES FILMMAKERS SCHEDULED TO ATTEND.

In the heart of Switzerland and particularly in the Muota valley an old tradition is still alive. The spry old men who live in the mountains above Schwyz are famous for predicting the weather using the ancient signs of animal behavior, plant growth, winds, and clouds. Twice a year, a competition is held in which these weathergazers tell elaborate, poetic, and humorous predictions for the coming six months, and are judged by both the accuracy of the forecast and the flourishes in their prose. Intensely picturesque, the landscapes try to nudge aside the weathergazers as the stars of this film. But these tough farmers are delightful and engaging with their local dialect, sharing their view from their homes perched high up in the grassy meadows. Although modernization threatens their traditional way of life, they scoff at the idea of global warming, since everyone knows that 300 years ago there were several particularly warm winters, and no one had cars back then. Just check the records at the local church.

“Finally! An African feature film that merges the pleasures of Nollywood with sleek camerawork, satisfying genre thrills and a rare look inside the very heart of the continent. Viva Riva! is unprecedented: a story set in contemporary Democratic Republic of the Congo full of intrigue, music and a surprisingly frank approach to sex.” — Cameron Bailey, Toronto International Film Festival. Riva returns home to Kinshasa after years of being away. He’s got money in his pocket and a plan to get hold of a truckload of gasoline barrels — one of the best black-market commodities there is. Other local businessmen/gangsters want a piece of the action, and Riva has to outwit and outrun his competition. The biggest crime boss in the city also, naturally, has the most seductively powerful woman on his arm, and the charismatic Riva sets out to capture her, too. Director Munga adds spoonfuls of observations about Congolese life, in particular their strained relations with neighboring Angolans. Cesar is one such foreigner, dressed in elaborate white suits and taking everything he can get. But mostly it’s a high-energy adventure, with plot twists, colorful characters, gun barrels, and lust around every dark corner in Kinshasa’s raucous night. Viva Riva! also increases the Festival’s quota of lesbian army commanders masquerading as nuns by one.

A fascinating bit of personal and state history is explored as 96-year-old Adolph Vandertie, a lifelong Wisconsin resident, describes his vested interest in the creation of hobo and tramp art, a hobby he picked up during the Great Depression and consistently returned to at the hardest moments of his life. Adolph’s story is also a remarkable look at the changing culture of Wisconsin in the 20th century, as well as the network of Midwesterns who work to keep traditions of tramp and hobo culture alive. Director Jim Rivett is a native of Green Bay and a graduate of UW-Whitewater. The film’s producer and cinematographers are also residents of Green Bay and De Pere.

An impossibly white lake stretches to meet the impossibly white sky, broken by the dark form of Rahmat’s small rowboat, its wooden canopy barely able to block the dazzling sun. Rahmat is off for a day’s work. With a small green glass vial, he’ll collect the tears shed by the inhabitants of the small settlements around this salt-crusted lake. Very much rooted in local folklore, The White Meadows strings together the separate stories of each community with Rahmat providing the connecting link to all. At each stop, Rahmat comes upon a scene of grief or melancholy: a young woman is dead, and her body has been preserved in a pile of salt to prepare for burial. It’s just as well, say the men of that place, since her body moved in too tempting a way under her burka. Rahmat observes, and collects the tears that fall as mourners gather. It’s quite possibly the most striking natural landscape of any film in the Festival, soaked in magic realism but still believable. In this way, the film easily takes on the metaphor for Iran’s oppression of nonconformists and creative spirits: the reason for Rahmat’s job is never given, only that he’s been doing it for 30 years. “Throughout, Iranian ills are movingly condemned, but it’s The White Meadows’ more general, humanistic portrait of man’s multifaceted nature that truly inspires, its social critique ultimately enhanced by its recognition of the fallibility, irrationality, and inscrutability of people’s hearts and minds.” — Nick Shager, Slant Magazine. In December 2010, director Mohammad Rasoulof (Iron Island, WFF06) was sentenced to six years in jail along with fellow filmmaker Jafar Panahi (The Mirror, WFF01; also editor on The White Meadows). Released on bail, their case is still pending. Copresented by the Global Film Initiative and is part of the Global Lens 2011 film series. For more information, visit globalfilm.org.

Following a tremendous reception at the 2011 Sundance Film Festival, Tom McCarthy’s Win Win comes bearing an exceptionally talented, funny, and emotional cast, lead by the never-better Paul Giamatti. (Okay, after American Splendor. And maybe after Sideways.) He plays Mike Flaherty, a new Jersey lawyer trying to manage his floundering law practice, his anxiety attacks, and a losing high-school wrestling team. One of Mike’s clients, an old geezer played by Burt Young (you’ll remember him from Rocky), receives a sudden visit from a grandson he never met, who’s come all the way from Ohio to get away from his deadbeat mom. Mike needs to help navigate this new situation, and learns that the kid, Kyle, is a talented wrestler who just might be what his team needs. At this point, you might think you know where the story’s going, but trust in McCarthy. Where others have lurched off into the macho heroics of a big season-ending championship, McCarthy stays firmly in the honest territory of Mike and Kyle’s slowly unfolding influence on each other. This teenage stranger is looking for a place to fit, after living a somewhat damaged childhood, and moves in with Mike’s family. Two of the best things about McCarthy’s film The Station Agent were the way unlikely characters overlapped and engaged each other, and Bobby Cannevale, who brings a similar palooka cluelessness to the story here. He helps set the tone, along with Jeffrey Tambor, for a brightly colored misfit comedy, balanced by Giamatti and newcomer Alex Shaffer’s more real-life problems. Altogether, a winning combination.

The most deadpan of comedies, Winter Vacation contemplates a lethargic pack of teenagers as they kill time in Inner Mongolia. Enduring a school holiday with the enthusiasm you’d greet a jail sentence, they’re not so much hanging out as waiting it out, lounging outside on snow-covered couches, barely able to muster the energy required to tease one another. Constructed in elegant wide shots, this unexpectedly funny film unfolds at a sedated clip, and its humor has a cumulative effect: once you get into its somnambulant rhythm, you’ll be hanging on every pregnant pause. This level of comic inaction would suggest an affinity with Waiting for Godot, except writer/director Li Hongqi’s slackers aren’t even sure what it is they’re waiting for — certainly not to go back to school. It’s more of a cross between the hangover hilarity of Daytime Drinking (WFF09) and the Kafkaesque vision of Roy Andersson (You, The Living, WFF08, Songs From the Second Floor, WFF02). The surprise winner of the top prize at the 2010 Lorcano Film Festival, Winter Vacation is also a favorite of many directors appearing at this year’s festival. Introducing a long interview with Hongqi in Cinema Scope, J.P. Sniadecki (Foreign Parts, WFF11) praised his “masterful mix of philosophical pessimism and dark humor,” and Thom Andersen (Get Out Of The Car, WFF11) cited the film as one of 2010’s “Unknown Pleasures” in Film Comment. Writing with a deadpan wit to match Hongqi’s, Andersen declared Winter Vacation “the funniest film since Good-