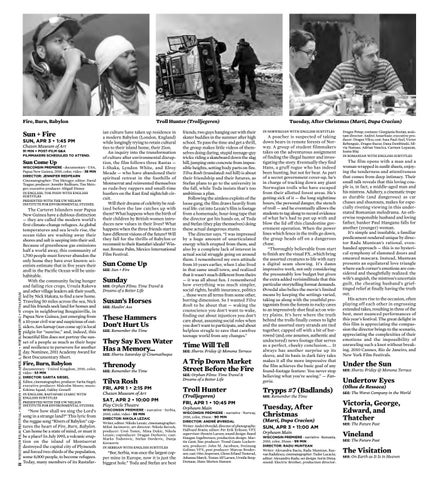 IN ENGLISH, TOK PISIN WITH ENGLISH SUBTITLES PRESENTED WITH THE UW NELSON INSTITUTE FOR ENVIRONMENTAL STUDIES.

The Carteret Islanders near Papua New Guinea have a dubious distinction — they are called the modern world’s first climate-change refugees. As global temperatures and sea levels rise, the ocean tides are washing away their shores and salt is seeping into their soil. Because of greenhouse gas emissions half a world away, this community of 1,700 people must forever abandon the only home they have ever known: scientists estimate that in five years their atoll in the Pacific Ocean will be uninhabitable. With the community facing hunger and failing rice crops, Ursula Rakova and other village leaders ask their youth, led by Nick Hakata, to find a new home. Traveling 50 miles across the sea, Nick and his friends seek land for homes and crops in neighboring Bougainville, in Papua New Guinea, just emerging from a 10-year civil war and suspicious of outsiders. San kamap (sun come up) is local pidgin for “sunrise,” and, indeed, this beautiful film does not portray the sunset of a people as much as their hope and resilience to persevere for another day. Nominee, 2011 Academy Award for Best Documentary Short.

Troll Hunter (Trolljegeren) ian culture have taken up residence in a modern Babylon (London, England) while longingly trying to retain cultural ties to their island home, their Zion. An inquiry into the transformation of culture after environmental disruption, the film follows three Rastas — I-Shaka, Lyndon White, and Elroy Meade — who have abandoned their spiritual retreat in the foothills of Montserrat and reinvented themselves as rude-boy rappers and small-time hustlers on the East End nightclub circuit. Will their dreams of celebrity be realized before the law catches up with them? What happens when the birth of their children by British women introduces new values in their lives? What happens when the three friends start to have different visions of the future? Will they fall for the thrills of Babylon or recommit to their Rastafari ideals? Winner, Bronze Palm, Mexico International Film Festival.

These Hammers Don’t Hurt Us SEE: Remember the Time

They Say Even Water Has a Memory... SEE: Shorts: Saturday @ Cinematheque

IN ENGLISH, RASTAFARI LYARIC WITH ENGLISH SUBTITLES PRESENTED WITH THE UW NELSON INSTITUTE FOR ENVIRONMENTAL STUDIES.

“Now how shall we sing the Lord’s song in a strange land?” This lyric from the reggae song “Rivers of Babylon” captures the heart of Fire, Burn, Babylon. Can home be a state of mind, or must it be a place? In July 1995, a volcanic eruption on the island of Montserrat destroyed the capital city of Plymouth and forced two-thirds of the population, some 8,000 people, to become refugees. Today, many members of its Rastafar-

“Bor, Serbia, was once the largest copper mine in Europe, now it is just the biggest hole.” Toda and Stefan are best

friends, two guys hanging out with their skater buddies in the summer after high school. To pass the time and get a thrill, the group makes little videos of themselves doing daring, stupid teenage-guy tricks: riding a skateboard down the slag hill, jumping onto concrete from impossible heights, setting body parts on fire. Tilva Rosh (translated: red hill) is about their friendship and their futures, as Stefan plans to go to the university in the fall, while Toda insists that’s too ambitious a plan. Following the aimless exploits of the loose gang, the film draws heavily from real life: cut into Lezaic’s film is footage from a homemade, hour-long tape that the director got his hands on, of Toda and Stefan (they play themselves) doing these actual dangerous stunts. The director says, “I was impressed by a huge amount of unarticulated energy which erupted from them, and also by a complete lack of interest in actual social struggle going on around them. I remembered my own attitude from 10 years earlier, when I also lived in that same small town, and realized that it wasn’t much different from theirs — it was all about fun. I remembered how everything was much simpler, social rights, health insurance, politics ... those were all terms from some other, borring dimension. So I wanted Tilva Rosh to be about that — waking the counscience you don’t want to wake, finding out about injustices you don’t care about, assuming social roles when you don’t want to participate, and about helpless strugle to save that carefree teenage world from any changes.”

A poacher is suspected of taking down bears in remote forests of Norway. A group of student filmmakers takes on the adventurous assignment of finding the illegal hunter and investigating the story. Eventually they find Hans, a gruff rogue who has indeed been hunting, but not for bear. As part of a secret government cover-up, he’s in charge of tracking down any giant Norwegian trolls who have escaped from their allotted forest areas. He’s getting sick of it — the long nighttime hours, the personal danger, the stench of troll — and he eventually allows the students to tag along to record evidence of what he’s had to put up with and blow the lid off this clandestine government operation. When the power lines which fence in the trolls go down, the group heads off on a dangerous chase. “Thoroughly believable from start to finish are the visual FX...which bring the assorted creatures to life with nary a digital seam showing. It’s damn impressive work, not only considering the presumably low budget but given the extra added verisimilitude that this particular storytelling format demands. Øvredal also belies the movie’s limited means by keeping the settings varied, taking us along with the youthful protagonists from the forests to rocky caves to an impressively shot final act on wintry plains. It’s here where the truth behind the trolls finally comes to light and the assorted story strands are tied together, capped off with a bit of borrowed (and, one assumes, authentic and undoctored) news footage that serves as a perfect, cheeky conclusion.... It always has another surprise up its sleeve, and its basis in dark fairy tales makes it all the more impressive that the film achieves the basic goal of any found-footage feature: You never stop believing what you’re seeing.” — Fangoria.

The film opens with a man and a woman wrapped in sunlit sheets, enjoying the tenderness and attentiveness that comes from deep intimacy. Their small talk reveals that this loving couple is, in fact, a middle-aged man and his mistress. Adultery, a cinematic trope as durable (and dangerous) as car chases and shootouts, makes for especially riveting viewing in this understated Romanian melodrama. An otherwise responsible husband and loving father, banker Paul Hanganu falls for another (younger) woman. It’s simple and insoluble, a familiar predicament rendered unique by director Radu Muntean’s rational, evenhanded approach — this is no hysterical symphony of slammed doors and smeared mascara. Instead, Muntean presents an equilateral love triangle where each corner’s emotions are considered and thoughtfully realized: the wife’s anguish, the mistress’s uncertain guilt, the cheating husband’s grieftinged relief at finally having the truth out. His actors rise to the occasion, often playing off each other in engrossing extended takes, resulting in three of the best, most nuanced performances of this year’s festival. The great delight in this film is appreciating the compassion the director brings to the scenario, appreciating the complexities of their emotions and the impossibility of unraveling such a knot without breaking. 2010 Cannes, Rio de Janeiro, and New York Film Festivals.

Victoria, George, Edward, and Thatcher SEE: The Future Past

Vineland SEE: The Future Past

The Visitation SEE: On Earth as It Is in Heaven