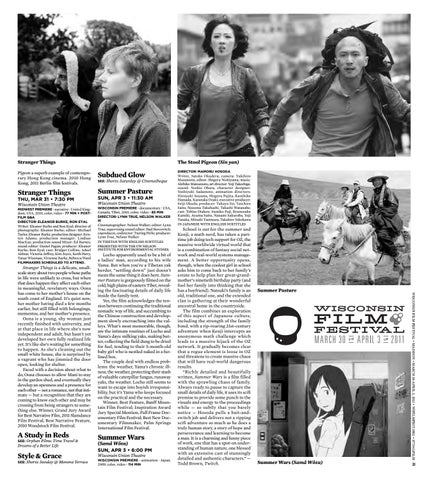 A Study in Reds

School is out for the summer and Kenji, a math nerd, has taken a parttime job doing tech support for OZ, the massive worldwide virtual world that is a combination of fantasy social network and real-world systems management. A better opportunity opens, though, when the coolest girl in school asks him to come back to her family’s estate to help plan her great-grandmother’s ninetieth birthday party (and fool her family into thinking that she has a boyfriend). Natsuki’s family is an old, traditional one, and the extended clan is gathering at their wonderful ancestral home in the countryside. The film combines an exploration of this aspect of Japanese culture, including the strength of the family bond, with a rip-roaring 21st-century adventure when Kenji intercepts an anonymous math challenge which leads to a massive hijack of the OZ network. It gradually becomes clear that a rogue element is loose in OZ and threatens to create massive chaos that will have real-world dangerous results. “Richly detailed and beautifully written, Summer Wars is a film filled with the sprawling chaos of family. Always ready to pause to capture the small details of daily life, it uses its scifi premise to provide some punch to the visuals and energy to the proceedings while — so subtly that you barely notice — Hosoda pulls a bait-andswitch job and delivers not a ripping scifi adventure so much as he does a truly human story, a story of hope and perseverance and learning to become a man. It is a charming and funny piece of work, one that has a spot-on understanding of human nature, one blessed with an extensive cast of stunningly detailed and authentic characters.” — Todd Brown, Twitch.

Stranger Things is a delicate, smallscale story about two people whose paths in life were unlikely to cross, but when that does happen they affect each other in meaningful, revelatory ways. Oona has come to her mother’s house on the south coast of England. It’s quiet now, her mother having died a few months earlier, but still filled with belongings, mementos, and her mother’s presence. Oona is a young, shy woman just recently finished with university, and at that place in life where she’s now independent and adult, but hasn’t yet developed her own fully realized life yet. It’s like she’s waiting for something to happen. As she’s cleaning out the small white house, she is surprised by a vagrant who has jimmied the door open, looking for shelter. Faced with a decision about what to do, Oona chooses to allow Mani to stay in the garden shed, and eventually they develop an openness and a presence for each other — not a romance, not that intimate — but a recognition that they are coming to know each other and may be crossing from being strangers to something else. Winner, Grand Jury Award for Best Narrative Film, 2011 Slamdance Film Festival; Best Narrative Feature, 2010 Woodstock Film Festival.

Locho apparently used to be a bit of a ladies’ man, according to his wife Yama. But when you’re a Tibetan yak herder, “settling down” just doesn’t mean the same thing it does here. Summer Pasture is gorgeously filmed on the cold, high plains of eastern Tibet, revealing the fascinating details of daily life inside the family tent. Yes, the film acknowledges the tension between continuing the traditional nomadic way of life, and succumbing to the Chinese construction and development slowly encroaching into the valleys. What’s most memorable, though, are the intimate routines of Locho and Yama’s days: milking yaks, making butter, collecting the field dung to be dried for fuel, tending to their 5-month-old baby girl who is nestled naked in a furlined box. The couple deal with endless problems: the weather, Yama’s chronic illness, the weather, protecting their stash of valuable caterpillar fungus, runaway yaks, the weather. Locho still seems to want to escape into boyish irresponsibility, but it’s Yama who keeps focused on the practical and the necessary. Winner, Best Feature, Banff Mountain Film Festival; Inspiration Award Jury Special Mention, Full Frame Documentary Film Festival; Best New Documentary Filmmaker, Palm Springs International Film Festival.