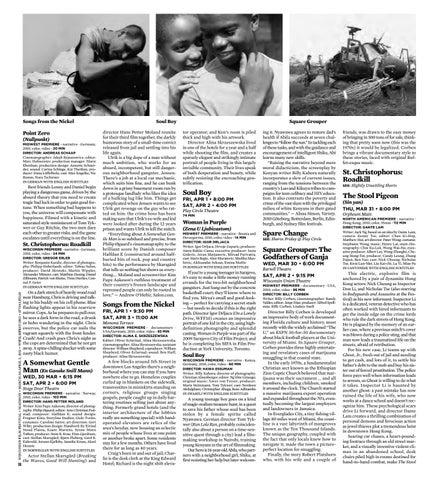 Songs from the Nickel

Best friends Lenny and Daniel begin playing a dangerous game, driven by the absurd theory that you need to create tragic bad luck in order to gain good fortune. When something bad happens to you, the universe will compensate with happiness. Filmed with a kinetic and saturated style reminiscent of Tom Tykwer or Guy Ritchie, the two men dare each other to greater risks, and the game escalates until everything is on the line.

On a dark stretch of heavily wood road near Hamburg, Chris is driving and talking to his buddy on his cell phone. Blue flashing lights appear in his rearview mirror. Cops. As he prepares to pull over, he sees a dark form in the road, a drunk or hobo wandering in the night. Chris swerves, but the police car nails the vagrant squarely with the front fender. Crash! And crash goes Chris’s night as the cops are determined that he not get away. A spine-chilling shocker with some nasty black humor.

Actor Stellan Skarsgård (Breaking the Waves, Good Will Hunting) and

Soul Boy director Hans Petter Moland reunite for their third film together, the darkly humorous story of a small-time convict released from jail and settling into his life again. Ulrik is a big dope of a man without much ambition, who works for an absurd, incompetent, but still dangerous neighborhood gangster, Jensen. There’s a job at a local car mechanic, which suits him fine, and he can bunk down in a grimy basement room run by a grotesque landlady who likes the idea of a hulking lug like him. Things get complicated when Jensen wants to see Ulrik get revenge on the guy who ratted on him: the crime boss has been making sure that Ulrik’s ex-wife and kid were looked after during the 12 years prison and wants Ulrik to kill the snitch. “Everything about A Somewhat Gentle Man is so subdued and precise, from Philip Øgaard’s cinematography to the brilliant score by Danish composer Halfdan E (constructed around halfburied bits of rock, pop and country hits) to the performance by Skarsgård that tells us nothing but shows us everything.... Moland and screenwriter Kim Fupz Aakeson’s ruthless treatment of their country’s frozen landscape and repressed people can only be rooted in love.” — Andrew O’Hehir, Salon.com.

Songs from the Nickel

A few blocks around 5th Street in downtown Los Angeles there’s a neighborhood where you can stay if you have nowhere else to go. Homeless couples curled up in blankets on the sidewalk, transvestites in miniskirts standing on corners, religious groups singing gospels, people caught up in daily bartering routines selling just about anything. Formerly grand hotels (and the interior architecture of the lobbies really are something special) with handoperated elevators are relics of the area’s heyday, now housing an eclectic mix of people whose lives at one point or another broke apart. Some residents stay for a few months. Others have lived there for as long as 40 years. Craig’s been in and out of jail; Charlie is the desk clerk at the King Edward Hotel; Richard is the night shift eleva-

Square Grouper tor operator; and Ken’s room is piled thick and high with his artwork. Director Alina Skrzeszewska lived in one of the hotels for a year and a half while shooting the film, and creates a sparsely elegant and strikingly intimate portrait of people living in this largely invisible community. Their lives speak of both desperation and beauty, while subtly resisting the encroaching gentrification.

Woman in Purple (Zena U Ljubicastom)

ing it. Nyawawa agrees to restore dad’s health if Abila succeeds at seven challenges to “follow the sun.” In tackling each of these tasks, and with the guidance and encouragement of intelligent Shiku, Abi learns many new skills. “Raising the narrative beyond mere moral didacticism, the screenplay by Kenyan writer Billy Kahora naturally incorporates a slew of current issues, ranging from the tensions between the country’s Luo and Kikuyu tribes to campaigns for teen celibacy and HIV education. It also contrasts the poverty and crime of the vast slum with the privileged milieu of white Kenyans in their gated communities.” — Alissa Simon, Variety. 2010 Göteborg, Rotterdam, Berlin, Edinburgh, and Sydney film festivals.

friends, was drawn to the easy money of bringing in 500 tons of for sale, thinking that pretty soon now (this was the 1970s) it would be legalized. Corben brings a vibrant documentary style to these stories, laced with original Buffet-esque music.

Square Grouper: The Godfathers of Ganja

IN BOSNIAN WITH ENGLISH SUBTITLES

IN CANTONESE WITH ENGLISH SUBTITLES

This electric, explosive film is anchored by a pair of dynamite Hong Kong actors: Nick Cheung as Inspector Don Li, and Nicholas Tse (also starring in Bodyguards and Assassins at the Festival) as his new informant. Inspector Li is a dedicated, veteran detective who has often worked with hired informants to get the inside edge on the crime lords who rule the dark streets of Hong Kong. He is plagued by the memory of an earlier case, where a previous snitch’s cover was blown during a police sting, and that man now leads a traumatized life on the streets, afraid of retribution. For his new case, Li teams up with Ghost, Jr., fresh out of jail and needing to get cash, and lots of it, to settle his father’s debt to the mob and buy his sister out of forced prostitution. The police force pays well when information leads to arrests, so Ghost is willing to do what it takes. Inspector Li is haunted by another ghost: a past mistake has now ruined the life of his wife, who now works at a dance school and doesn’t recognize him. These psychological scars drive Li forward, and director Dante Lam creates a thrilling combination of personal demons and ferocious action as jewel thieves plot a tremendous heist in downtown Hong Kong. Searing car chases, a heart-pounding footrace through an old street market, and a visually inventive violent climax in an abandoned school, desk chairs piled high in rooms destined for hand-to-hand combat, make The Stool

If you’re a young teenager in Sarajevo, it’s easy to make a little money running errands for the two-bit neighborhood gangsters. Just hang out by the concrete basketball court; they’ll know where to find you. Mirza’s small and good-looking — perfect for carrying a secret stash — but needs to decide if this is the right path. Director Igor Drljaca (On a Lonely Drive, WFF10) creates an impressive portrait of one kid in the city, using highdefinition photography and splendid casting. Woman in Purple was part of the 2009 Sarajevo City of Film Project; and he is completing his MFA in Film Production at York University, Toronto.

A young teenage boy goes on a kind of magic-realism treasure hunt, in a quest to save his father whose soul has been stolen by a female spirite called Nyawawa. German director Tom Tykwer (Run Lola Run, probably coincidentally also about a person on a time-sensitive quest through a city) lead a filmmaking workshop in Nairobi, training young Kenyans in the art of filmmaking. Our hero is 14-year-old Abila, who partners with a neighborhood girl, Shiku, at first resisting her help but later welcom-

Director Billy Corben is developed an impressive body of work documenting Florida culture and history, most recently with the widely acclaimed “The U,” an ESPN 30-for-30 documentary about black football players at the University of Miami. In Square Grouper, Corben provides three highly entertaining and revelatory cases of marijuana smuggling in that coastal state. In the early 1970s, a fundamentalist Christian sect known as the Ethiopian Zion Coptic Church believed that marijuana was their sacrament ... and all members, including children, smoked it around the clock. The Church started a massive marijuana export operation and expanded throughout the 70’s, eventually becoming the largest employers and landowners in Jamaica. In Everglades City, a tiny fishing village 80 miles west of Miami, the coastline is a vast labyrinth of mangroves known as the Ten Thousand Islands. The unique geography, coupled with the fact that only locals knew how to navigate it, made the town a pictureperfect location for smuggling. Finally, the story Robert Platshorn who, with his wife and a couple of