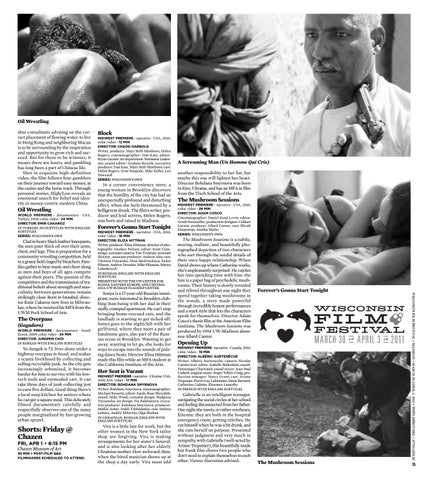 Oil Wrestling shui consultants advising on the correct placement of flowing water, to live in Hong Kong and neighboring Macau is to be surrounding by the inspiration and opportunity to grow rich and succeed. But for there to be winners, it means there are losers, and gambling has long been a part of Chinese life. Shot in exquisite high-definition video, the film follows four gamblers on their journey toward easy money, at the casino and the horse track. Through personal stories, High/Low reveals an emotional search for belief and identity in money-centric modern China.

Yo Jungok is 73, lives alone under a highway overpass in Seoul, and makes a scanty livelihood by collecting and selling recyclable junk. As the city gets increasingly urbanized, it becomes harder for him to survive with his lowtech tools and outmoded cart. It can take three days of junk collecting just to earn five dollars. Good thing there’s a local soup kitchen for seniors where he can get a square meal. This delicately filmed documentary carefully and respectfully observes one of the many people marginalized by fast-growing urban sprawl.

In a corner convenience store, a young woman in Brooklyn discovers that the hostility of the city has had an unexpectedly profound and disturbing effect, when she feels threatened by a belligerent drunk. The film’s writer, producer and lead actress, Helen Rogers, was born and raised in Madison.

Sonya is a 17-year-old Russian immigrant, more interested in Brooklyn clubbing than being with her dad in their stuffy, cramped apartment. He can’t stop bringing home rescued cats, and the landlady is starting to get ticked off. Sonya goes to the nightclub with her girlfriend, where they meet a pair of handsome guys, also part of the Russian scene in Brooklyn. Wanting to get away, wanting to let go, she looks for ways to escape into the sounds of pulsing dance beats. Director Eliza Hittman made this film while an MFA student at the California Institute of the Arts.

Vira is a little late for work, but the other women in the New York tailor shop are forgiving. Vira is making arrangements for her sister’s funeral, and is also looking after her elderly Ukrainian mother. How awkward, then, when the hired musician shows up at the shop a day early. Vira must add

A Screaming Man (Un Homme Qui Crie) another responsibility to her list, but maybe this one will lighten her heart. Director Bohdana Smyrnova was born in Kiev, Ukraine, and has an MFA in film from the Tisch School of the Arts.

The Mushroom Sessions is a subtle, moving, realistic, and beautifully photographed depiction of two characters who sort through the sordid details of their once happy relationship. When David shows up where Catherine works, she’s unpleasantly surprised. He cajoles her into spending time with him: the lure is a paper bag of psychedelic mushrooms. Their history is slowly revealed and relived throughout one night they spend together taking mushrooms in the woods, a story made powerful through incredibly honest performances and a stark style that lets the characters speak for themselves. Director Adam Cosco’s thesis film at the American Film Institute, The Mushroom Sessions was produced by 1994 UW-Madison alumnus Allard Cantor.

Gabrielle is an intelligent teenager, navigating the social circles at her school and feeling disconnected from her father. One night she meets, or rather overhears, Étienne: they are both in the hospital emergency room, getting stitches. He cut himself when he was a bit drunk, and she cuts herself on purpose. Presented without judgment and very much in sympathy with Gabrielle (well-acted by Ariane Trepanier), this beautifully made but frank film shows two people who don’t need to explain themselves to each other. Viewer discretion advised.

Clad in heavy black leather kneepants, the men pour thick oil over their arms, chest, and legs. This is preparation for a community wrestling competition, held in a grassy field ringed by bleachers. Families gather to hear music and cheer along as men and boys of all ages compete against their peers. The passion of the competitors and the transmission of traditional beliefs about strength and masculinity between generations remain strikingly clear. Born in Istanbul, director Emir Cakaroz now lives in Milwaukee, where he received his MFA from the UWM Peck School of Arts.