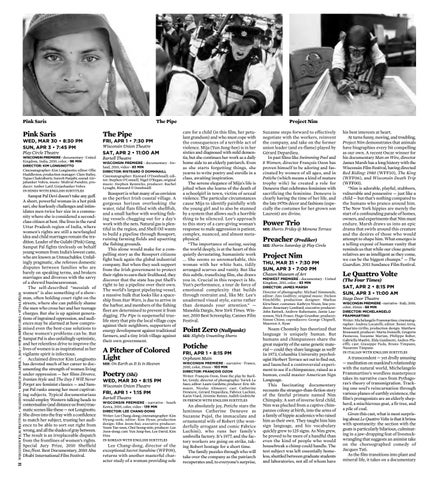 IN HINDI WITH ENGLISH SUBTITLES

Sampat Pal Devi doesn’t take any guff. A short, powerful woman in a hot pink sari, she fearlessly challenges and intimidates men twice her size in a community where she is considered a secondclass citizen at best. She lives in the rural Uttar Pradesh region of India, where women’s rights are still a newfangled idea and child marriages remain the tradition. Leader of the Gulabi (Pink) Gang, Sampat Pal fights tirelessly on behalf young women from India’s lowest caste, who are known as Untouchables. Unfailingly pragmatic, she referees domestic disputes between families who are barely on speaking terms, and brokers marriages and divorces with the savvy of a shrewd businesswoman. The self-described “messiah of women” is also something of a showman, often holding court right on the streets, where she can publicly shame the men who cross her and her teenage charges. But she is up against generations of ingrained oppression, and audiences may be alarmed at how compromised even the best-case solutions to these women’s problems can be. But Sampat Pal is also unfailingly optimistic, and her relentless drive to improve the lives of women is as inspirational as her vigilante spirit is infectious. Acclaimed director Kim Longinotto has devoted much of her career to documenting the strength of women living under oppression — her films Divorce, Iranian Style and The Day I Will Never Forget are feminist classics — and Sampat Pal ranks among her most captivating subjects. Typical documentarians would employ Western talking heads to contextualize (and distance us from) traumatic scenes like these — not Longinotto. She dives into the fray with a confidence to match her subject, trusting her audience to be able to sort out right from wrong, and all the shades of gray between. The result is an irreplaceable dispatch from the frontlines of women’s rights. Special Jury Prize, 2010 Sheffield Doc/Fest. Best Documentary, 2010 Abu Dhabi International Film Festival.

Rossport is what many of us envision as the perfect Irish coastal village. A gorgeous horizon overlooking the water, tidal flats filled with shellfish, and a small harbor with working fishing vessels chugging out for a day’s work with the nets. Natural gas is plentiful in the region, and Shell Oil wants to build a pipeline through Rossport, ruining farming fields and upsetting the fishing grounds. This alone would make for a compelling story as the Rossport citizens fight back again the global industrial company. But when they seek support from the Irish government to protect their rights to earn their livelihood, they discover that the state has put Shell’s right to lay a pipeline over their own. The world’s largest pipelaying vessel, a massive hulk that looks like a spaceship from Star Wars, is due to arrive in the harbor, and members of the fishing fleet are determined to prevent it from digging. The Pipe is suspenseful truelife story that pits the local village cops against their neighbors, supporters of energy development against traditional farmers, and a tiny Irish village against their own government.

A Pitcher of Colored Light SEE: On Earth as It Is in Heaven

Lee Chang-dong, director of the exceptional Secret Sunshine (WFF09), returns with another masterful character study of a woman providing sole

Project Nim care for a child (in this film, her petulant grandson) and who must cope with the consequences of a terrible act of violence. Mija (Yun Jung-hee) is in her sixties and diagnosed with mild dementia, but she continues her work as a daily home aide to an elderly patriarch. Even as she starts forgetting things, she yearns to write poetry and enrolls in a class, awaiting inspiration. The serene elegance of Mija’s life is jolted when she learns of the death of a schoolgirl in town, victim of sexual violence. The particular circumstances cause Mija to identify painfully with the young girl and to also be stunned by a system that allows such a horrible thing to be silenced. Lee’s approach to this story of a care-giving woman’s response to male aggression is patient, complex, nuanced, and almost metaphysical. “The importance of seeing, seeing the world deeply, is at the heart of this quietly devastating, humanistic work ... She seems so unremarkable, this woman with her white hats, tidily arranged scarves and vanity. But like this subtle, transfixing film, she draws you in. Crucial in this respect is Ms. Yun’s performance, a tour de force of emotional complexity that builds through restraint and, like Mr. Lee’s unadorned visual style, earns rather than demands your attention.” — Manohla Dargis, New York Times. Winner, 2010 Best Screenplay, Cannes Film Festival.

An absolutely joy, Potiche stars the luminous Catherine Deneuve as Suzanne Pujol, the immaculate and ornamental wife of Robert (the wonderfully arrogant and comic Fabrice Luchini), who runs her family’s umbrella factory. It’s 1977, and the factory workers are going on strike, taking Robert hostage for a short time. The family puzzles through who will take over the company as the patriarch recuperates and, to everyone’s surprise,

Suzanne steps forward to effectively negotiate with the workers, reinvent the company, and take on the former union leader (and ex-flame) played by Gérard Depardieu. In past films like Swimming Pool and 8 Women, director François Ozon has proven himself to be adoring and fascinated by women of all ages, and in Potiche (which means a kind of mature trophy wife) he created a role for Deneuve that celebrates feminism with sacrificing the feminine. Deneuve is clearly having the time of her life, and the late 1970s décor and fashions (especially the costumes for her grown son Laurent) are divine.

Noam Chomsky has theorized that language is uniquely human. But humans and chimpanzees share the great majority of the same genetic material — could they share language as well? In 1973, Columbia University psychologist Herbert Terrace set out to find out, and launched a controversial experiment to see if a chimpanzee, raised as a human, could master American Sign Language. This fascinating documentary recounts the stranger-than-fiction story of the fateful primate named Nim Chimpsky. A sort of inverse feral child, Nim was plucked from a captive chimpanzee colony at birth, into the arms of a family of hippie academics who raised him as their own. They taught him him sign language, and his vocabulary quickly grew to 125 signs. As Nim grew, he proved to be more of a handful than even the kind of people who would housebreak a chimp could handle. The test subject was left essentially homeless, shuttled between graduate students and laboratories, not all of whom have

his best interests at heart. At turns funny, moving, and troubling, Project Nim demonstrates that animals have biographies every bit compelling as our own. A recent Oscar winner for his documentary Man on Wire, director James Marsh has a long history with the Wisconsin Film Festival, having directed Red Riding: 1980 (WFF10), The King (WFF06), and Wisconsin Death Trip (WFF00). “Nim is adorable, playful, stubborn, vulnerable and possessive — just like a child — but that’s nothing compared to the humans who prance around him. The New York hippies are merely the start of a confounding parade of homes, owners, and experiments that Nim must endure. Marsh draws us into an epic drama that swirls around this creature and the desires of those who would attempt to shape him. What emerges is a telling exposé of human vanity that reminds us that while our close genetic relatives are as intelligent as they come, we can be the biggest chumps.” — The Guardian. 2011 Sundance Film Festival.

A transcendent — yet drolly amusing — meditation on mankind’s relationship with the natural world, Michelangelo Frammartino’s wordless masterpiece takes its narrative cues from Pythagoras’s theory of transmigration. Tracking one soul’s reincarnation through various planes of earthly existence, the film’s protagonists are an elderly shepherd, a mischievous goat, a fir tree, and a pile of coal. Given this cast, what is most surprising about Le Quattro Volte is that it brims with spontaneity: the section with the goats is particularly hilarious, culminating in a jaw-dropping feat of livestockwrangling that suggests an animist take on the choreographed comedy of Jacques Tati. As the film transitions into plant and mineral life, it takes on a documentary