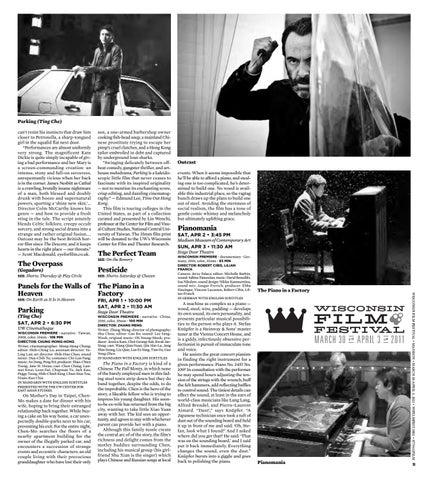 Parking (Ting Che) can’t resist his instincts that draw him closer to Petronella, a sharp-tongued girl in the squalid flat next door. “Performances are almost uniformly very strong. The magnificent Kate Dickie is quite simply incapable of giving a bad performance and her Mary is a screen-commanding creation: an intense, stony and full-on sorceress, unrepentantly vicious when her back is in the corner. James Nesbitt as Cathal is a crawling, brutally insane nightmare of a man, both blessed and doubly drunk with booze and supernatural powers, sporting a ‘shiny new skin.’... Director Colm McCarthy knows his genre — and how to provide a fresh sting in the tale. The script astutely blends Celtic folklore, creepy occult sorcery, and strong social drama into a strange and rather original fusion.... Outcast may be the best British horror film since The Descent, and it keeps hearts in the right place — our throats.” — Scott Macdonald, eyeforfilm.co.uk.

son, a one-armed barbershop owner cooking fish-head soup, a mainland Chinese prostitute trying to escape her pimp’s cruel clutches, and a Hong Kong tailor embroiled in debt and captured by underground loan sharks. “Swinging delicately between offbeat comedy, gangster thriller, and arthouse melodrama, Parking is a kaleidoscopic little film that never ceases to fascinate with its inspired originality — not to mention its enchanting score, crisp editing, and dazzling cinematography.” — Edmund Lee, Time Out Hong Kong. This film is touring colleges in the United States, as part of a collection curated and presented by Lin Wenchi, professor at the Center for Film and Visual Culture Studies, National Central University of Taiwan. The 35mm film print will be donated to the UW’s Wisconsin Center for Film and Theater Research.

The Perfect Team SEE: On the Bowery

SEE: On Earth as It Is in Heaven

On Mother’s Day in Taipei, ChenMo makes a date for dinner with his wife, hoping to bring their estranged relationship back together. While buying a cake on his way home, a car unexpectedly double-parks next to his car, preventing his exit. For the entire night, Chen-Mo searches the floors of a nearby apartment building for the owner of the illegally parked car, and encounters a succession of strange events and eccentric characters: an old couple living with their precocious granddaughter who have lost their only

The Piano in a Factory is kind of a Chinese The Full Monty, in which none of the barely employed men in this fading steel town strip down but they do band together, despite the odds, to do the improbable. Chen is the hero of the story, a likeable fellow who is trying to impress his young daughter. His soonto-be ex-wife has returned from the big city, wanting to take little Xiao Yuan away with her. The kid sees an opportunity, and agrees to stay with whichever parent can provide her with a piano. Although this family tussle create the central arc of of the story, the film’s richness and delight comes from the motley buddies surrounding Chen, including his musical group (his girlfriend Shu Xian is the singer) which plays Chinese and Russian songs at local

events. When it seems impossible that he’ll be able to afford a piano, and stealing one is too complicated, he’s determined to build one. No wood is available this industrial place, so the ragtag bunch draws up the plans to build one out of steel. Avoiding the sternness of social realism, the film has a tone of gentle comic whimsy and melancholy but ultimately uplifting grace.

The Piano in a Factory

A machine as complex as a piano — wood, steel, wire, padding — develops its own sound, its own personality, and presents particular musical possibilities to the person who plays it. Stefan Knüpfer is a Steinway &amp; Sons’ master tuner at the Vienna Concert House, and is a giddy, infectiously obsessive perfectionist in pursuit of immaculate tone and voice. He assists the great concert pianists in finding the right instrument for a given performance. Piano No. 245? No. 109? In consultation with the performer he may spend hours adjusting the tension of the strings with the wrench, buff the felt hammers, add reflecting baffles to control sound. The tiniest details can affect the sound, at least in the ears of world-class musicians like Lang Lang, Alfred Brendel, and Pierre-Laurent Aimard. “Dust!,” says Knüpfer. “A Japanese technician once took a tuft of dust out of the sounding board and held it up in front of me and said: ‘Oh, Stefan, look what I found!’ And I asked where did you get that? He said: ‘That was on the sounding board,’ and I said put it back immediately. Everything changes the sound, even the dust.” Knüpfer bursts into a giggle and goes back to polishing the piano.

Panels for the Walls of The Piano in a Heaven Factory