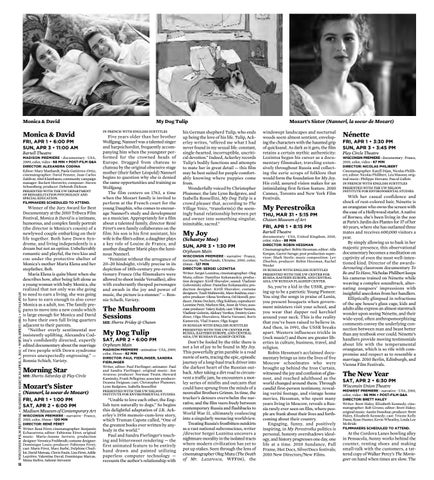 PRESENTED WITH THE UW DEPARTMENT OF REHABILITATION PSYCHOLOGY AND SPECIAL EDUCATION. FILMMAKERS SCHEDULED TO ATTEND.

Winner of the Jury Award for Best Documentary at the 2010 Tribeca Film Festival, Monica &amp; David is a intimate, humorous, and complex family portrait (the director is Monica’s cousin) of a newlywed couple embarking on their life together. Both have Down Syndrome, and living independently is a dream but not an option. Unbelievably romantic and playful, the two kiss and coo under the protective shelter of Monica’s mother Maria Elena and her stepfather, Bob. Maria Elena is quite blunt when she describes how, after being left alone as a young woman with baby Monica, she realized that not only was she going to need to earn a living, she was going to have to earn enough to also cover Monica as a adult, too. The family prepares to move into a new condo which is large enough for Monica and David to have their own full living quarters adjacent to their parents. “Neither overly sentimental nor insistently uplifting, Alexandra Codina’s confidently directed, expertly edited documentary about the marriage of two people with Down syndrome proves unexpectedly engrossing.” — Ronnie Schieb, Variety.

My Dog Tulip IN FRENCH WITH ENGLISH SUBTITLES

Five years older than her brother Wolfgang, Nannerl was a talented singer and harpsichordist, frequently accompanying him when the youngster performed for the crowned heads of Europe. Dragged from chateau to chateau by the original obsessive stage mother (their father Léopold) Nannerl begins to question why she is denied the same opportunities and training as Wolfgang. The film centers on 1763, a time when the Mozart family is invited to perform at the French court for the young Dauphin, who comes to encourage Nannerl’s study and development as a musician. Appropriately for a film about a talented family, director René Féret’s own family collaborates on the film: his son is his first assistant, his wife is the film’s editor, a daughter plays a key role of Louise de France, and another daughter Marié plays the luminous Nannerl. “Feminist without the arrogance of 20–20 hindsight, vividly precise in its depiction of 18th-century pre-revolutionary France (the filmmakers were allowed to shoot inside Versailles), alive with exuberantly thesped personages and awash in the joy and power of music, the picture is a stunner.” — Ronnie Scheib, Variety.

“Unable to love each other, the English turn naturally to dogs.” So begins this delightful adaptation of J.R. Ackerley’s 1956 memoir-cum-love story, which Truman Capote called, “One of the greatest books ever written by anybody in the world.” Paul and Sandra Fierlinger’s touching and bittersweet rendering — the first animated feature to be entirely hand drawn and painted utilizing paperless computer technology — recounts the author’s relationship with

his German shepherd Tulip, who ends up being the love of his life. Tulip, Ackerley writes, “offered me what I had never found in my sexual life: constant, single-hearted, incorruptible, uncritical devotion.” Indeed, Ackerley records Tulip’s bodily functions and attempts to mate her in great detail — this film may be best suited for people comfortably knowing where puppies come from. Wonderfully voiced by Christopher Plummer, the late Lynn Redgrave, and Isabella Rossellini, My Dog Tulip is a crowd pleaser that, according to The Village Voice, “transform(s) the seemingly banal relationship between pet and owner into something singular, inimitable, sacred.”

windswept landscapes and nocturnal woods seem almost sentient, enveloping the characters with the haunted grip of quicksand. As dark as it gets, the film retains a certain mythic authenticity: Lozintsa began his career as a documentary filmmaker, traveling extensively throughout Russia and collecting the eerie scraps of folklore that would form the foundation for My Joy. His cold, assured vision makes for an intimidating first fiction feature. 2010 Cannes, Toronto and New York Film Festivals.

Don’t be fooled by the title: there is not a lot of joy to be found in My Joy. This powerfully grim parable is a road movie of sorts, tracing the epic, episodic journey of a long-haul truck driver into the darkest heart of the Russian outback. After taking a dirt road to circumvent a traffic jam, he encounters a motley series of misfits and outcasts that could have sprung from the minds of a neorealist Brothers Grimm. In time, the trucker’s detours overwhelm the narrative, and the film veers freely between contemporary Russia and flashbacks to World War II, ultimately coalescing into a singularly menacing worldview. Treating Russia’s frostbitten outskirts as a vast national subconscious, writer /director Sergei Loznitsa uncovers a nightmare morality in the isolated tracts where modern civilization has yet to put up stakes. Seen through the lens of cinematographer Oleg Mutu (The Death of Mr. Lazarescu, WFF06), the

So, you’re a kid in the USSR, growing up to be a patriotic Young Pioneer. You sing the songs in praise of Lenin, you present bouquets when government ministers visit your school, and you wear that dapper red kerchief around your neck. This is the reality that you’ve been raised to believe in. And then, in 1991, the USSR breaks apart. Western influences trickle in (rock music!) and there are greater liberties in culture, business, travel, and religion. Robin Hessman’s acclaimed documentary brings us into the lives of five Moscow schoolmates who were brought up behind the Iron Curtain, witnessed the joy and confusion of glasnost, and reached adulthood as the world changed around them. Through candid first-person testimony, revealing verité footage, and vintage home movies, Hessman, who spent many years living in Moscow, reveals a Russia rarely ever seen on film, where people are frank about their lives and forthcoming about their country. Engaging, funny, and positively inspiring, in My Perestroika politics is personal, honesty overshadows ideology, and history progresses one day, one life at a time. 2010 Sundance, Full Frame, Hot Docs, SilverDocs festivals; 2010 New Directors/New Films.

With her casual confidence and shock of rust-colored hair, Nénette is an orangutan who owns the screen with the ease of a Hollywood starlet. A native of Borneo, she’s been living in the zoo at Paris’s Jardin des Plantes for 37 of her 40 years, where she has outlasted three mates and receives 600,000 visitors a year. By simply allowing us to bask in her majestic presence, this observational documentary becomes a meditation on captivity of even the most well-intentioned kind. Director of the awardsdevouring classroom documentary To Be and To Have, Nicholas Philibert keeps his cameras trained on Nénette while weaving a complex soundtrack, alternating zoogoers’ impressions with insightful anecdotes from her handlers. Elliptically glimpsed in refractions of the ape house’s glass cage, kids and adults alike express an almost starstruck wonder upon seeing Nénette, and their wide-eyed, often anthropomorphizing comments convey the underlying connection between man and beast better than any textbook ever could. Nénette’s handlers provide moving testimonials about life with the temperamental orangutan, which is so rife with compromise and respect as to resemble a marriage. 2010 Berlin, Edinburgh, and Vienna Film Festivals.

At the Cordova Lanes bowling alley in Pensacola, Sunny works behind the counter, renting shoes and making small-talk with the customers, a tattered copy of Walker Percy’s The Moviegoer on hand when times are slow. The