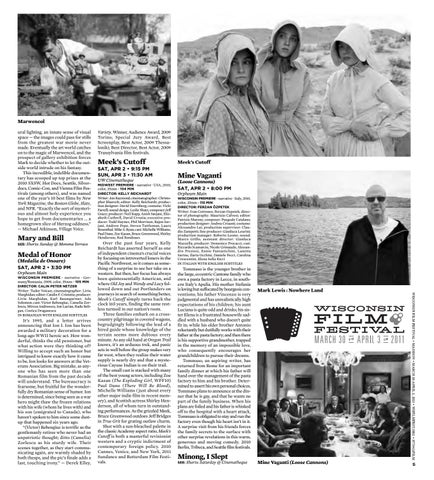 Marwencol ural lighting, an innate sense of visual space — the images could pass for stills from the greatest war movie never made. Eventually the art world catches on to the magic of Marwencol, and the prospect of gallery exhibition forces Mark to decide whether to let the outside world intrude on his fantasy. This incredible, indelible documentary has scooped up top prizes at the 2010 SXSW, Hot Docs, Seattle, Silverdocs, Comic-Con, and Vienna Film Festivals (among others), and was named one of the year’s 10 best films by New York Magazine, the Boston Globe, Slate, and NPR. “Exactly the sort of mysterious and almost holy experience you hope to get from documentaries ... a homegrown slice of Herzog oddness.” — Michael Atkinson, Village Voice.

IN ROMANIAN WITH ENGLISH SUBTITLES

It’s 1995, and a letter arrives announcing that Ion I. Ion has been awarded a military decoration for a long-ago WWII heroic act. How wonderful, thinks the old pensioner, but what action were they thinking of? Willing to accept such an honor but intrigued to know exactly how it came to be, Ion looks for answers at the Veterans Association. Big mistake, as anyone who has seen more than one Romanian film from the past decade will understand. The bureaucracy is fearsome, but fruitful for the wonderfully dry Romanian sense of humor. Ion is determined, since being seen as a war hero might thaw the frozen relations with his wife (whom he lives with) and his son (emigrated to Canada), who haven’t spoken to him since some dustup that happened six years ago. “(Victor) Rebengiuc is terrific as the gentlemanly retiree who never had an unpatriotic thought; ditto (Camelia) Zorlescu as his sturdy wife. Their scenes together, as they start communicating again, are warmly shaded by both thesps, and the pic’s finale adds a last, touching irony.” — Derek Elley,

Over the past four years, Kelly Reichardt has asserted herself as one of independent cinema’s crucial voices by focusing on introverted loners in the Pacific Northwest, so it comes as something of a surprise to see her take on a western. But then, her focus has always been quintessentially American, and where Old Joy and Wendy and Lucy followed down and out Portlanders on journeys in search of something better, Meek’s Cutoff simply turns back the clock 165 years, finding the same restless turmoil in our nation’s roots. Three families embark on a crosscountry pilgrimage in covered wagons, begrudgingly following the lead of a hired guide whose knowledge of the terrain seems more dubious every minute. As any old hand at Oregon Trail knows, it’s an arduous trek, and panic sets in well before the group makes very far west, when they realize their water supply is nearly dry and that a mysterious Cayuse Indian is on their trail. The small cast is stacked with many of the best young actors, including Zoe Kazan (The Exploding Girl, WFF10) Paul Dano (There Will Be Blood), Michelle Williams ( just about every other major indie film in recent memory), and Scottish actress Shirley Henderson, all of whom turn in outstanding performances. As the grizzled Meek, Bruce Greenwood outdoes Jeff Bridges in True Grit for grating outlaw charm. Shot with a sun-bleached palette in the classic Academy aspect ratio, Meek’s Cutoff is both a masterful revisionist western and a cryptic indictment of contemporary foreign policy. 2010 Cannes, Venice, and New York, 2011 Sundance and Rotterdam Film Festivals.

Tommaso is the younger brother in the large, eccentric Cantone family who own a pasta factory in Lecce, in southern Italy’s Apulia. His mother Stefania is loving but suffocated by bourgeois conventions; his father Vincenzo is very judgmental and has unrealistically high expectations of his children; his aunt Luciana is quite odd and drinks; his sister Elena is a frustrated housewife saddled with a husband who doesn’t quite fit in; while his older brother Antonio reluctantly but dutifully works with their father at the pasta factory; and then there is his supportive grandmother, trapped in the memory of an impossible love, who consequently encourages her grandchildren to pursue their dreams. Tommaso, an aspiring writer, has returned from Rome for an important family dinner at which his father will hand over the management of the pasta factory to him and his brother. Determined to assert his own personal choices, Tommaso plans to announce at the dinner that he is gay, and that he wants no part of the family business. When his plans are foiled and his father is whisked off to the hospital with a heart attack, Tommaso is obligated to stay and run the factory even though his heart isn’t in it. A surprise visit from his friends forces the family secrets to the surface with other surprise revelations in this warm, generous and moving comedy. 2010 Berlin, Tribeca, and Seattle film festivals.