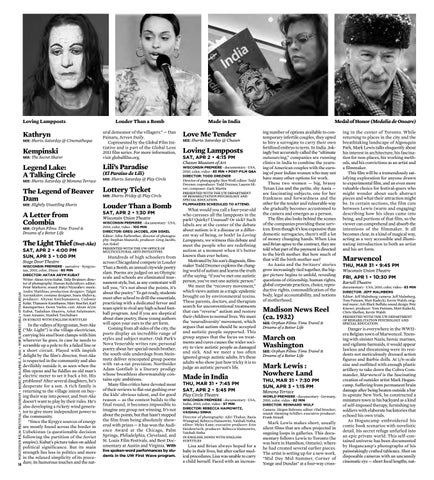 ural demeanor of the villagers.” — Dan Fainaru, Screen Daily. Copresented by the Global Film Initiative and is part of the Global Lens 2011 film series. For more information, visit globalfilm.org.

The Legend of Beaver Dam

Louder Than a Bomb

Louder Than a Bomb

In the valleys of Kyrgyzstan, Svet-Ake (“Mr. Light”) is the village electrician, carrying his steel boot clamps with him wherever he goes, in case he needs to scramble up a pole to fix a failed line or a short circuit. Played with impish delight by the film’s director, Svet-Ake is respected in the community and also devilishly outside it, as seen when the film opens and he fiddles an old man’s electric meter to set it back a bit. His problems? After several daughters, he’s desperate for a son. A rich family is returning to the village intent on buying their way into power, and Svet-Ake doesn’t want to play by their rules. He’s also developing a rickety wind generator to give more independent power to the community. “Since the Kyrgyz sources of energy are mostly found across the border in Uzbekistan (a questionable decision following the partition of the Soviet empire), Kubat’s picture takes on added political significance. But its main strength lies less in politics and more in the relaxed simplicity of its procedure, its humorous touches and the nat14

Hundreds of high schoolers from across Chicagoland compete in Louder Than a Bomb, an annual citywide poetry slam. Poems are judged on an Olympic scale and schools are eliminated tournament-style, but, as any contestant will tell you, “it’s not about the points, it’s about the poetry.” To get ready, students meet after school to drill the essentials, practicing with a dedicated fervor and team spirit to rival any high school football program. And if you are skeptical about slam poetry, these young authors will open your ears to the art form. Coming from all sides of the city, the poets display an incredible range of styles and subject matter: Oak Park’s Nova Venerable writes raw, personal poetry about her special-needs brother; the south-side underdogs from Steinmetz deliver syncopated group poems with rat-a-tat precision; Northsider Adam Gottlieb is a literary prodigy whose breathless showmanship contains epic ambitions. Many film critics have devoted most of their reviews to flat-out gushing over the kids’ obvious talent, and for good reason — as the contest builds to the final round, it becomes impossible to imagine any group not winning. It’s not about the points, but that hasn’t stopped the film from being absolutely showered with prizes — it has won the Audience Award at the Chicago, Palm Springs, Philadelphia, Cleveland, and St. Louis Film Festivals, and Best Documentary at Austin and Virginia. With live spoken-word performances by students in the UW First Wave program.

What would you call a four-year-old who caresses all the lampposts in the park? Quirky? Unusual? Or sick? Such labels are at the center of the debate about autism: is it a disease or a different way of being, or both? In Loving Lampposts, we witness this debate and meet the people who are redefining autism at a moment when it’s better known than ever before. Motivated by his son’s diagnosis, filmmaker Todd Drezner explores the changing world of autism and learns the truth of the saying, “if you’ve met one autistic person, you’ve met one autistic person.” We meet the “recovery movement,” which views autism as a tragic epidemic brought on by environmental toxins. These parents, doctors, and therapists search for unconventional treatments that can “reverse” autism and restore their children to normal lives. We meet the ‘neurodiversity’ movement, which argues that autism should be accepted and autistic people supported. This group argues that the focus on treatments and cures causes the wider society to view autistic people as damaged and sick. And we meet a too often ignored group: autistic adults. It’s these adults who show just how tricky it is to judge an autistic person’s life.

Lisa and Brian always hoped for a baby in their lives, but after earlier medical procedures, Lisa was unable to carry a child herself. Faced with an increas-

Medal of Honor (Medalia de Onoare) ing number of options available to contemporary infertile couples, they opted to hire a surrogate to carry their own fertilized embryo to term. In India. Jokingly but accurately called the “ultimate outsourcing,” companies are running clinics in India to combine the yearning of American couples with the earning of poor Indian women who may not have many other options for work. These two women — big, brassy Texan Lisa and the petite, shy Aasia — are fascinating subjects, one for her frankness and forwardness and the other for the tender and vulnerable way she gradually becomes accustomed to the camera and emerges as a person. The film also looks behind the scenes of the companies providing these services. Even though it’s less expensive than domestic surrogacies, there’s still a lot of money changing hands. When Lisa and Brian agree to the contract, they are told what part of the payment is directed to the birth mother. But how much of that will the birth mother see? As Aasia and the Switzers’ stories grow increasingly tied together, the bigger picture begins to unfold, revealing questions of citizenship, human rights, global corporate practices, choice, reproductive rights, commodification of the body, legal accountability, and notions of motherhood.

Mark Lewis makes short, usually silent films that are often projected in ongoing loops in galleries. This documentary follows Lewis to Toronto (he was born in Hamilton, Ontario), where he had created several earlier pieces. The artist is setting up for a new work, “Mid Day Mid Summer, Corner of Yonge and Dundas” at a four-way cross-

ing in the center of Toronto. While returning to places in the city and the breathtaking landscape of Algonquin Park, Mark Lewis talks eloquently about his interest in architecture, his fascination for non-places, his working methods, and his convictions as an artist and a filmmaker. This film will be a tremendously satisfying exploration for anyone drawn to experimental film, and an even more valuable choice for festival-goers who might wonder about such abstract pieces and what their attraction might be. In certain sections, the film cuts between Lewis (warm and engaging) describing how his ideas came into being, and portions of that film, so the viewer can comprehend and absorb the intentions of the filmmaker. It all becomes clear, in a kind of magical way, acting as a very accessible and illuminating introduction to both an artist and his art form.

Danger is everywhere in the WWIIera Belgian town of Marwencol. Teeming with sinister Nazis, heroic marines, and vigilante barmaids, it would appear lawless and threatening were its residents not meticulously dressed action figures and Barbie dolls. At 1/6-scale size and outfitted with enough plastic artillery to take down the Cobra Commander, Marwencol is the fascinating creation of outsider artist Mark Hogancamp. Suffering from permanent brain damage after being beaten outside a bar in upstate New York, he constructed a miniature town in his backyard as a kind of self-imposed therapy, furnishing toy soldiers with elaborate backstories that echoed his own trials. As Hogancamp embroidered his comic book scenarios with novelistic detail, his secret refuge unfurled into an epic private world. This self-contained universe has been documented by Hogancamp’s photographs of his painstakingly crafted tableaux. Shot on disposable cameras with an uncannily cinematic eye — short focal lengths, nat-