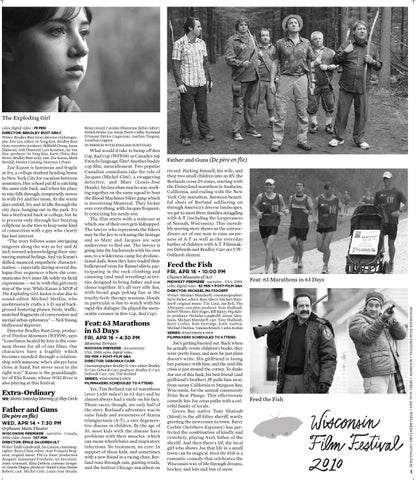 IN FRENCH WITH ENGLISH SUBTITLES

What would it take to bump off Bon Cop, Bad Cop (WFF08) as Canada’s top French-language film? Another buddy cop film, naturallement. Two popular Canadian comedians take the role of Jacques (Michel Côté), a swaggering detective, and Marc (Louis-Jose Houde), his less-than-macho son, working together on the same squad to bust the Blood Machines biker gang which is terrorizing Montreal. They bicker over everything, with Jacques frequently criticizing his nerdy son. The film starts with a stakeout at which one of their own gets kidnapped. The lawyer who represents the bikers may be the key to releasing the hostage and so Marc and Jacques are sent undercover to find out. The lawyer is going into the backwoods with his own son, to a wilderness camp for dysfunctional dads. Soon they have traded their bulletproof vests for flannel shirts, participating in the rock climbing and canoeing (and mud wrestling) activities designed to bring father and son closer together. It’s all very silly fun, with broad gags poking fun at the touchy-feely therapy sessions. Houde in particular is fun to watch with his rapid-fire dialogue (he played the memorable coroner in Bon Cop, Bad Cop).

Yes, Tim Borland ran 63 marathons (over 1,650 miles!) in 63 days and he almost always had a smile on his face. These races, though, are only half of the story. Borland’s adventure was to raise funds and awareness of Ataxia telangiectasia (A-T), a rare degenerative disease in children. By the age of 10, most kids with the disease have problems with their muscles, which can mean wheelchairs and respiratory infections. No treatment, no cure. In support of these kids, and sometimes with a new friend in a racing chair, Borland runs through rain, gusting winds, and the hottest Chicago marathon on

Father and Guns (De père en flic) record. Packing himself, his wife, and their two small children into an RV, the Borlands cross 29 states, starting with the Disneyland marathon in Anaheim, California, and ending with the New York City marathon. Between beautiful shots of Borland soldiering on through America’s diverse landscapes, we get to meet three families struggling with A-T (including the Lesperances of Neenah, Wisconsin). This incredibly moving story shows us the extraordinary act of one man to raise awareness of A-T as well as the everyday battles of children with A-T. Filmmakers Deborah and Bradley Carr are UWOshkosh alumni.

Joe’s getting burned out. Back when he actually wrote children’s books, they were pretty lousy, and now he just plain doesn’t write. His girlfriend is losing her patience with him, and the mid-life crisis is just around the corner. To shake Joe out of this funk, his best friend (and girlfriend’s brother) JP pulls him away from sunny California to Sturgeon Bay, Wisconsin, for the annual community Polar Bear Plunge. This affectionate comedy lets Joe cross paths with a colorful family of locals. Green Bay native Tony Shaloub (Monk) is the off-kilter sheriff, warily greeting the newcomer to town. Barry Corbin (Northern Exposure) has perfected the combination of kindly and crotchety, playing Axel, father of the sheriff. And then there’s Sif, the local girl who shows Joe that life in a small town can be magical. Feed the Fish is a romantic comedy that celebrates the Wisconsin way of life through dreams, hockey, and lots and lots of snow.

Zoe Kazan is luminous and fragile as Ivy, a college student heading home to New York City for vacation between semesters. Her school pal Al is catching the same ride back, and when his place to stay falls through, temporarily moves in with Ivy and her mom. As the warm days unfold, Ivy and Al idle through the city days, hanging out in the park. Ivy has a boyfriend back at college, but he is present only through her buzzing cellphone as she tries to keep some kind of connection with a guy who clearly has lost interest. “The story follows some intriguing tangents along the way as Ivy and Al inch toward acknowledging their simmering mutual feelings. And via Kazan’s skilled, nuanced, empathetic characterization — especially during several dialogue-free sequences where she communicates Ivy’s inner life solely via facial expressions — we’re with this girl every step of the way. While Kazan is MVP of The Exploding Girl, kudos is also due to sound-editor Michael Sterkin, who unobtrusively crafts a 3-D aural background featuring planes, birds, traffic, snatched fragments of conversation and myriad urban ephemera.” — Neil Young, Hollywood Reporter. Director Bradley Rust Gray, producer of Treeless Mountain (WFF09), says: “Loneliness healed by love is the common theme for all of our films. Our characters have a fragility which becomes mended through a relationship with someone who’s always been close at hand, but never seen in the right way.” Kazan is the granddaughter of Elia Kazan, whose Wild River is also playing at this festival.