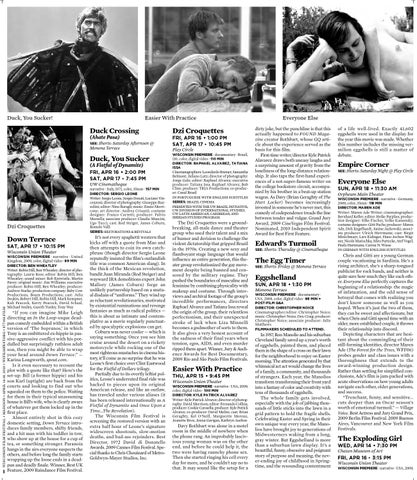 “If you can imagine Mike Leigh directing an In the Loop-esque deadpan comedy embedded within a British version of ‘The Sopranos,’ in which Tony is an embittered ex-hippie in passive-aggressive conflict with his potdulled but surprisingly ruthless adult son, then you might be able to wrap your head around Down Terrace.” — Karina Longworth, spout.com. Is it even necessary to recount the plot with a quote like that? Here’s the set-up: Bill (a former hippie) and his son Karl (uptight) are back from the courts and looking to find out who squealed on them to the police. Waiting for them in their typical unassuming house is Bill’s wife, who is clearly aware of whatever got them locked up in the first place. Almost entirely shot in this cozy domestic setting, Down Terrace introduces family members, shifty friends, and a hit man with his toddler in tow, who show up at the house for a cup of tea, or something stronger. Paranoia hangs in the airs everyone suspects the others, and before long the family starts wrapping up the loose ends in a deadpan and deadly finale. Winner, Best UK 8 Feature, 2009 Raindance Film Festival.

It’s not every spaghetti western that kicks off with a quote from Mao and then attempts to coin its own catchphrase (though director Sergio Leone reputedly insisted the film’s outlandish title was common American slang). In the thick of the Mexican revolution, bandit Juan Miranda (Rod Steiger) and wayward IRA demolitions expert John Mallory (James Coburn) forge an unlikely partnership based on a mutual disdain of “uniforms.” They wind up as reluctant revolutionaries, motivated by existential ruminations and revenge fantasies as much as radical politics — this is about as intimate and contemplative as a movie regularly punctuated by apocalyptic explosions can get. Coburn was never cooler — which is saying something. Once you see him cruise around the desert on a rickety motorcycle while rocking one of the most righteous mustaches in cinema history, it’ll come as no surprise that he was Leone’s first choice over Clint Eastwood for the Fistful of Dollars trilogy. Partially due to its overtly leftist politics, Leone’s underrated final ride was hacked to pieces upon its original American release, and like an outlaw, has traveled under various aliases (it has been released internationally as A Fistful of Dynamite and Once Upon a Time…The Revolution). The Wisconsin Film Festival is screening the restored version with an extra half hour of Leone’s signature widescreen shootouts, slow-motion deaths, and bad-ass rejoinders. Best Director, 1972 David di Donatello Awards. 2009 Cannes Film Festival. Special thanks to Chris Chouinard of MetroGoldwyn-Mayer Studios, Inc.

The Dzi Croquettes were a groundbreaking, all-male dance and theater group who used their talent and a mix of humor and derision to challenge the violent dictatorship that gripped Brazil in the 1970s. Creating a new sexy and flamboyant stage language that would influence an entire generation, this theater group revolutionized the gay movement despite being banned and censored by the military regime. They pushed the boundaries of masculine and feminine by combining physicality with makeup and costume. Through interviews and archival footage of the group’s incredible performances, directors Raphael Alvarez and Tatiana Issa reveal the origin of the group, their relentless perfectionism, and their unexpected stroke of luck when Liza Minnelli becomes a godmother of sorts to them. It also gives a very honest account of the sadness of their final years when tension, egos, AIDS, and even murder ripped them apart. Winner, Jury &amp; Audience Awards for Best Documentary, 2009 Rio and São Paulo Film Festivals.

Davy Rothbart was alone in a motel room in the middle of nowhere when the phone rang. An improbably lascivious young woman was on the other end, and before he could help it, the two were having raunchy phone sex. Then she started ringing his cell every day for more, and he couldn’t say no to that. It may sound like the setup for a

Everyone Else dirty joke, but the punchline is that this actually happened to FOUND Magazine creator Rothbart, whose GQ article about the experience served as the basis for this film. First-time writer/director Kyle Patrick Alavarez draws both uneasy laughs and a surprising amount of gravity from the loneliness of the long-distance relationship. It also taps the first-hand experiences of a not-super-famous writer on the college bookstore circuit, accompanied by his brother in a beat-up station wagon. As Davy (Brian Geraghty of The Hurt Locker) becomes increasingly invested in someone he’s never met, this comedy of codependence treads the line between tender and vulgar. Grand Jury Award, 2009 CineVegas Film Festival. Nominated, 2010 Independent Spirit Award for Best First Feature.

In 1957, Ron Manolio and his suburban Cleveland family saved up a year’s worth of eggshells, painted them, and placed them in the shape of a cross on their lawn for the neighborhood to enjoy on Easter morning. The attention generated by that whimsical act act would change the lives of a family, a community, and thousands of strangers. Each year, the Manolios transform transforming their front yard into a fantasy of color and creativity with tens of thousands of eggshells. The whole family gets involved, especially with the job of jabbing thousands of little sticks into the lawn in a grid pattern to hold the fragile shells. Celebrating Easter and Spring in their own unique way every year, the Manolios have brought joy to generations of Midwesterners waking from a long, gray winter. But Eggshelland is more than a suburban lawn display. It’s a beautiful, funny, obsessive and poignant story of purpose and meaning, the never-ending joy of childhood in Springtime, and the resounding contentment

of a life well-lived. Exactly 41,602 eggshells were used in the display for the year this movie was made. Whether this number includes the missing vermilion eggshells is still a matter of debate.

Chris and Gitti are a young German couple vacationing in Sardinia. He’s a rising architect, she’s a sharp-tongued publicist for rock bands, and neither is quite sure how much they like each other. Everyone Else perfectly captures the beginning of a relationship: the magic of infatuation, and the odd sense of betrayal that comes with realizing you don’t know someone as well as you hoped. When it’s just the two of them, they can be sweet and affectionate, but when Chris and Gitti spend time with an older, more established couple, it throws their relationship into discord. Depicting characters that are hesitant about the commingling of their still-forming identities, director Maren Ade (The Forest for the Trees, WFF06) probes gender and class issues with a thoroughness that extends to the award-winning production design. Rather than settling for simplified conclusions, Ade’s film is jam-packed with acute observations on how young adults navigate each other, older generations, and success. “Trenchant, funny, and sensitive... cuts deeper than an Oscar season’s worth of emotional turmoil.” — Village Voice. Best Actress and Jury Grand Prix, 2009 Berlin Film Festival. 2009 Buenos Aires, Vancouver and New York Film Festivals.