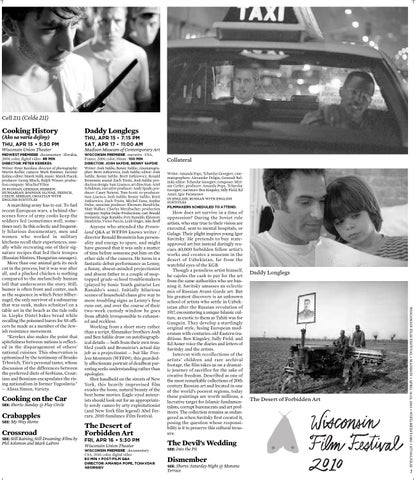 Anyone who attended the Frownland Q&amp;A at WFF09 knows writer / director Ronald Bronstein has personality and energy to spare, and might have guessed that it was only a matter of time before someone put him on the other side of the camera. He turns in a fantastic debut performance as Lenny, a funny, absent-minded projectionist and absent father to a couple of moptopped grade-school troublemakers (played by Sonic Youth guitarist Lee Ranaldo’s sons). Initially hilarious scenes of household chaos give way to more troubling signs as Lenny’s fuse runs out, and over the course of their two-week custody window he goes from affably irresponsible to exhausted and reckless. Working from a short story rather than a script, filmmaker brothers Josh and Ben Safdie draw on autobiographical details — both from their own troubled youth and Bronstein’s actual day job as a projectionist — but like Treeless Mountain (WFF09), this guardedly affectionate portrait of deadbeat parenting seeks understanding rather than apologies. Shot handheld on the streets of New York, this heavily improvised film exudes the loose, natural beauty of the best home movies. Eagle-eyed auteurists should look out for an appropriately seedy cameo by arty exploitationist (and New York film legend) Abel Ferrara. 2010 Sundance Film Festival.

The Desert of Forbidden Art

How does art survive in a time of oppression? During the Soviet rule artists, who stay true to their vision are executed, sent to mental hospitals, or Gulags. Their plight inspires young Igor Savitsky. He pretends to buy stateapproved art but instead daringly rescues 40,000 forbidden fellow artist’s works and creates a museum in the desert of Uzbekistan, far from the watchful eyes of the KGB. Though a penniless artist himself, he cajoles the cash to pay for the art from the same authorities who are banning it. Savitsky amasses an eclectic mix of Russian Avant-Garde art. But his greatest discovery is an unknown school of artists who settle in Uzbekistan after the Russian revolution of 1917, encountering a unique Islamic culture, as exotic to them as Tahiti was for Gauguin. They develop a startlingly original style, fusing European modernism with centuries-old Eastern traditions. Ben Kingsley, Sally Field, and Ed Asner voice the diaries and letters of Savitsky and the artists. Intercut with recollections of the artists’ children and rare archival footage, the film takes us on a dramatic journey of sacrifice for the sake of creative freedom. Described as one of the most remarkable collections of 20th century Russian art and located in one of the world’s poorest regions, today these paintings are worth millions, a lucrative target for Islamic fundamentalists, corrupt bureaucrats and art profiteers. The collection remains as endangered as when Savitsky first created it, posing the question whose responsibility is it to preserve this cultural treasure.

SEE: Into the Pit

The Desert of Forbidden Art

A marching army has to eat. To fuel recent European wars, a behind-thescenes force of army cooks keep the soldiers fed (sometimes well, sometimes not). In this eclectic and frequently hilarious documentary, men and women who worked in military kitchens recall their experiences, usually while recreating one of their signature recipes that fed their troupes (Russian blintzes, Hungarian sausages). More than one animal gets its neck cut in the process, but it was war after all, and a plucked chicken is nothing compared to the melancholy human toll that underscores the story. Still, humor is often front and center, such as the sequence in which Peter Silbernagel, the only survivor of a submarine that was sunk, makes schnitzel on a table set in the beach as the tide rolls in. Liepke Distel bakes bread while recalling the poisoned loaves for SS officers he made as a member of the Jewish resistance movement. “Kerekes also makes the point that spitefulness between nations is reflected in the disparagement of others’ national cuisines. This observation is epitomized by the testimony of Branko Trbovich, Tito’s personal taster, whose discussion of the differences between the preferred diets of Serbians, Croatians and Bosnians encapsulates the rising nationalism in former Yugoslavia.” — Alissa Simon, Variety.