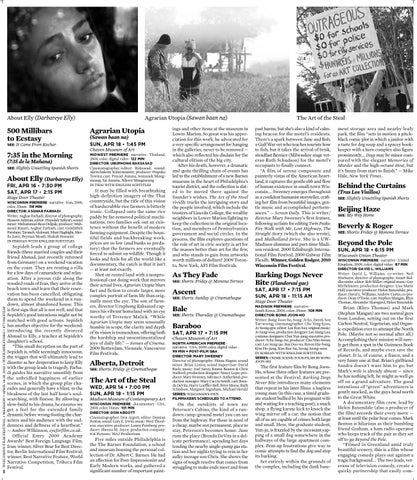 SEE: It Came From Kuchar

IN PERSIAN WITH ENGLISH SUBTITLES

Sepideh leads a group of college friends (three married couples and their friend Ahmad, just recently returned from Germany) on a weekend vacation on the coast. They are renting a villa for a few days of camaraderie and relaxation. After a joyous ride along the wooded roads of Iran, they arrive at the beach town and learn that their reservation has been cancelled, obligating them to spend the weekend in a rundown, almost abandoned house. This is first sign that all is not well, and that Sepideh’s good intentions might not be matched with good actions. Sepideh has another objective for the weekend: introducing the recently divorced Ahmad to Elly, a teacher at Sepideh’s daughter’s school. “This small deception on the part of Sepideh is, while seemingly innocuous, the trigger that will ultimately lead to disaster as her desperation to keep Elly with the group leads to tragedy. Farhadi guides his narrative smoothly from the unbridled happiness of earlier scenes, in which the group play charades and generally have a blast, to the bleakness of the last half hour’s soulsearching, with finesse. By allowing a slow-build to his drama, he ensures we get a feel for the extended family dynamic before wrong-footing the characters and his audience with the suddenness and deftness of a heartbeat.” — Amber Wilkinson, eyeforfilm.co.uk. Official Entry 2009 Academy Awards® Best Foreign Language Film, Iran; winner, Silver Bear for Best Director, Berlin International Film Festival; winner, Best Narrative Feature, World Narrative Competition, Tribeca Film Festival.

The Art of the Steal

It may be filled with breathtaking high-definition imagery of the Thai countryside, but the title of this vision of hardscrabble rice farmers is bitterly ironic. Collapsed onto the same rice paddy by far-removed political machinations, two families eek out an existence without the benefit of modern farming equipment. Despite the bountiful fields and backbreaking work, prices are so low (and banks so predatory) that the farmers are eventually forced to subsist on wildlife. Though it looks and feels for all the world like a documentary, the catch is that it isn’t — at least not exactly. Shot on rented land with a nonprofessional cast doing work that mirrors their actual lives, Agrarian Utopia blurs fact and fiction to create larger, more complex portrait of farm life than originally meet the eye. The son of farmers, director Uruphong Raksasad captures his vibrant homeland with an eye worthy of Terrence Malick. “While Agrarian Utopia may seem unusually humble in scope, the clarity and depth of its vision is tremendous, offering both the hardship and unsentimentalized joys of daily life.” — Senses of Cinema. 2009 Rotterdam, Viennale, Vancouver Film Festivals.

Five miles outside Philadelphia is the The Barnes Foundation, a school and museum housing the personal collection of Dr. Albert C. Barnes. He had an affection for Post-Impressionist and Early Modern works, and gathered a significant number of important paint-

ings and other items at the museum in Lower Marion. So great was his appreciation for this work, he advocated for a very specific arrangement for hanging in the galleries, never to be removed — which also reflected his disdain for the cultural elitism of the big city. After his death, however, a dramatic and quite thrilling chain of events has led to the establishment of a new Barnes museum in the heart of Philadelphia’s tourist district, and the collection is slated to be moved there against the founder’s wishes. The Art of the Steal vividly tracks the intriguing story and the people involved, which include the trustees of Lincoln College, the wealthy neighbors in Lower Marion fighting to keep the collection in the original location, and members of Pennsylvania’s government and social circles. In the process, the film explores questions of the role of art in civic society: is art for the masses better than art for the few, and who stands to gain from artworks worth millions of dollars? 2009 Toronto, New York, AFI Film Festivals.

past harms, but she’s also a kind of calming beacon for the motel’s residents. There’s a spark between Jane and Bob, a Gulf War vet who teaches tourists how to fish, but it takes the arrival of brisk, steadfast Bernice (Milwaukee stage veteran Ruth Schudson) for the motel’s occupants to finally connect. “A film of serene composure and painterly vistas of the American heartland, it captures the gentle ebb and flow of human existence in small-town Wisconsin.... Sweeney emerges throughout as a confident humanist storyteller, crafting her film from beautiful images, gentle music and accomplished performances.” — Screen Daily. This is writer/ director Mary Sweeney’s first feature, following acclaim for editing Twin Peaks: Fire Walk with Me, Lost Highway, The Straight Story (which she also wrote), and Mulholland Drive. She is a UWMadison alumnus and part-time Madison resident. 2009 Edinburgh International Film Festival, 2009 Galway Film Fleadh. Winner, Golden Badger, 2010 Wisconsin Film Festival.

On the outskirts of town are Petersen’s Cabins, the kind of a rundown camp-ground motel you can see from the highway. For those in need of a cheap, maybe not permanent, place to stay, Petersen’s becomes home. Jane runs the place (Brenda DeVita in a delicate performance), spending her days tending the nearby single-pump gas station and her nights trying to rein in her sulky teenage son Chris. She shows the signs of tough resolve that comes from struggling to make ends meet and from

The first feature film by Bong JoonHo, whose three other features are presented at the Festival, Barking Dogs Never Bite introduces many elements that repeat in his later films: a hapless young man (in this case, a timid graduate student bullied by his pregnant wife and waiting for a teaching post); a snack shop; a flying karate kick to knock the wing mirror off a car; the notion that all of us are capable of crimes both large and small. Here, the graduate student, Yun-ju, is frazzled by the incessant yapping of a small dog somewhere in the hallways of the large apartment complex. Pent-up frustrations give way to comic attempts to find the dog and stop its barking. Set entirely within the grounds of the complex, including the dank base-

ment storage area and nearby leafy park, the film “sets in motion a pitchblack comic plot in which a janitor with a taste for dog soup and a spacey bookkeeper with a hero complex also figure prominently.... Dogs may be minor compared with the elegant Memories of Murder and the high-octane Host, but it’s funny from start to finish.” — Mike Hale, New York Times.

Brian (Rhys Thomas) and Mark (Stephan Mangan) are two normal guys from London, setting out on the first Carbon Neutral, Vegetarian, and Organic expedition ever to attempt the North Pole. (Maybe not so normal after all.) Accomplishing their mission will surely get them a spot in the Guinness Book of Records, and maybe even save the planet. It is, of course, a fiasco, and a very funny one at that. Brian’s girlfriend Sandra doesn’t want him to go, but Mark’s wife is already absent — since he has nothing left, he might as well go off on a grand adventure. The good intentions of “green” adventurers is gently mocked, as the guys head north to the Great White. A documentary film crew, lead by Helen Baxendale (also a producer of the film) records their every move — at least until the polar bear comes. Mark Benton is hilarious as their bumbling friend Graham, a ham radio operator who keeps track of the pair as they set off to go Beyond the Pole. “Filmed in Greenland amid truly beautiful scenery, this is a film whose engaging comedy plays out against a tragic background.... The two leads, veterans of television comedy, create a quirky partnership that easily com-