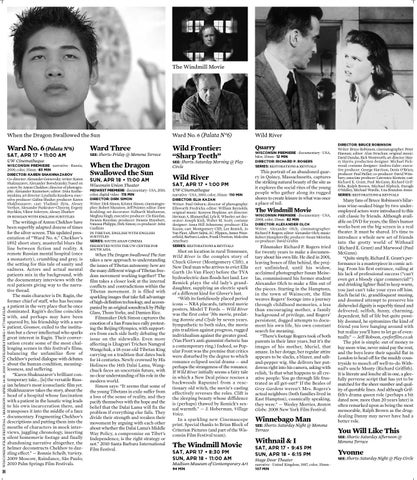 When the Dragon Swallowed the Sun

IN RUSSIAN WITH ENGLISH SUBTITLES

The writings of Anton Chekhov have been superbly adapted dozens of times for the silver screen. This updated presentation of “Ward No. 6,” Chekhov’s 1892 short story, masterful blurs the line between fiction and reality. A remote Russian mental hospital (once a monastery), crumbling and gray, is the setting for this tale of sanity and sadness. Actors and actual mental patients mix in the background, with the documentary interviews with the real patients giving way to the narrative thread. The main character is Dr. Ragin, the former chief of staff, who has become a patient in the very place that he once dominated. Ragin’s decline coincides with, and perhaps may have been spurred by, his friendship with a new patient, Gromov, exiled to the institution but a clever intellectual who sparks great interest in Ragin. Their conversation create some of the most challenging scenes in this festival’s films, balancing the unfamiliar flow of Chekhov’s period dialogue with debates about the human condition, meaninglessness, and suffering. “Karen Shaknazarov’s brilliant contemporary take... [is] the versatile Russian helmer’s most iconoclastic film yet. Shakhnazarov takes the story, about the head of a hospital whose fascination with a patient in the lunatic wing leads to his own incarceration there, and transposes it into the middle of a faux documentary. Fragmenting Chekhov’s descriptions and putting them into the mouths of characters in mock interviews, juggling chronology, inserting silent homemovie footage and finally abandoning narrative altogether, the helmer deconstructs Chekhov to dazzling effect.” — Ronnie Scheib, Variety. 2009 Moscow, Raindance, São Paulo; 2010 Palm Springs Film Festivals.

When the Dragon Swallowed the Sun SUN, APR 18 • 11:00 AM Wisconsin Union Theater

When The Dragon Swallowed The Sun takes a new approach to understanding the issues of Tibetan autonomy: how are the many different wings of Tibetan freedom movement working together? The film takes a closer look at the internal conflicts and contradictions within the Tibetan movement. It is filled with sparkling images that take full advantage of high-definition technology, and accompanied by an original soundtrack by Philip Glass, Thom Yorke, and Damien Rice. Filmmaker Dirk Simon captures the emotion of a San Francisco rally protesting the Beijing Olympics, with supporters from each side hotly debating the issue on the sidewalks. Even more affecting is Lhagyari Trichen Namgyal Wangchuk, a 18-year-old Tibetan King carrying on a tradition that dates back for 14 centuries. Newly crowned by His Holiness the 14th Dalai Lama, Wangchuck faces an uncertain future, with no clear understanding of his role in the modern world. Simon says: “It seems that some of the young Tibetans in exile suffer from a loss of the sense of reality, and they pacify themselves with the hope and the belief that the Dalai Lama will fix the problem if everything else fails. They divide their strength and weaken their movement by arguing with each other about whether the Dalai Lama’s Middle Way Policy, a compromise on Tibet’s Independence, is the right strategy or not.” 2010 Santa Barbara International Film Festival.

Shot on location in rural Tennessee, Wild River is the complex story of Chuck Glover (Montgomery Clift), a New Deal man who arrives to evict Ella Garth (Jo Van Fleet) before the TVA hydroelectric dam floods her land. Lee Remick plays the old lady’s granddaughter, supplying an electric spark of a different kind for Glover’s lust. “With its fastidiously placed period icons — NRA placards, tattered movie posters, Model T Fords — Wild River was the first color ’30s movie, predating Bonnie and Clyde by seven years. Sympathetic to both sides, the movie pits tradition against progress, rugged individualism against the greater good. (Van Fleet’s anti-gummint rhetoric has a contemporary ring.) Indeed, so Popular Front was the premise that critics were disturbed by the degree to which romance eclipsed social drama — and perhaps the strangeness of the romance. If Wild River initially seems a fairy tale in which a New Deal prince rescues a backwoods Rapunzel from a reactionary old witch, the movie’s casting effectively reverses the roles. Clift is the sleeping beauty whose diffidence is (perhaps) thawed by Remick’s sexual warmth.” — J. Hoberman, Village Voice. In a sparkling new Cinemascope print. Special thanks to Brian Block of Criterion Pictures (and part of the Wisconsin Film Festival team).

This portrait of an abandoned quarry in Quincy, Massachusetts, captures the striking natural beauty of the site as it explores the social rites of the young people who gather along its rugged shores to create leisure in what was once a place of toil.

Filmmaker Richard P. Rogers tried for twenty years to make a documentary about his own life. He died in 2001, leaving boxes of film behind, the project unfinished, until his widow, acclaimed photographer Susan Meiselas, commissioned his former student Alexander Olch to make a film out of the pieces. Starting in the Hamptons, in the town of Wainscott, the film weaves Rogers’ footage into a journey through childhood memories, a less than encouraging mother, a family background of privilege, and Rogers’ persistent, dogged attempts to document his own life, his own constant search for meaning. “There’s footage Rogers took of both parents in their later years, but it’s the images of his mother, Muriel, that amaze. In her dotage, her regular attire appears to be slacks, a blazer, and saltand-pepper wig. She delivers her putdowns right into his camera, asking with relish, ‘Is that what happens to all creative people: You go through life frustrated as all get-out?’ If the Beales of Grey Gardens weren’t Mrs. Rogers’s actual neighbors (both families lived in East Hampton), cosmically speaking, they were.” — Wesley Morries, Boston Globe. 2008 New York Film Festival.

Many fans of Bruce Robinson’s hilarious wine-soaked binge by two underemployed actors were introduced to this cult classic by friends. Although available on DVD for years, the film’s humor works best on the big screen in a real theater. It must be shared. It’s time to introduce a whole new set of friends into the grotty world of Withnail (Richard E. Grant) and Marwood (Paul McGann). “Quite simply, Richard E. Grant’s performance is a masterpiece in comic acting. From his first entrance, railing at his lack of professional success (“can’t even get a bloody cigar commercial!”) and drinking lighter fluid to keep warm, you just can’t take your eyes off him. Each facial tic, grandiloquent musing, and doomed attempt to preserve his disheveled dignity is superbly timed and delivered; selfish, funny, charming, dependent, full of life but quite possibly doomed, he epitomizes the kind of friend you love hanging around with but realize you’ll have to let go of eventually.” — Jeff Robson, eyeforfilm.co.uk The plot is simple: out of money to buy more wine, never mind pay the rent, and the boys leave their squalid flat in London to head off for the muddy countryside to mooch off well-to-do Withnail’s uncle Monty (Richard Griffith). It is literate and louche all in one, a gleefully perverse script that has yet to be matched for the sheer number and quality of quotable lines. And although Griffith’s drama queen role (perhaps a bit dated now, more than 20 years later) is often remarked upon as being the most memorable, Ralph Brown as the drugdealing Danny may never have had a better role.