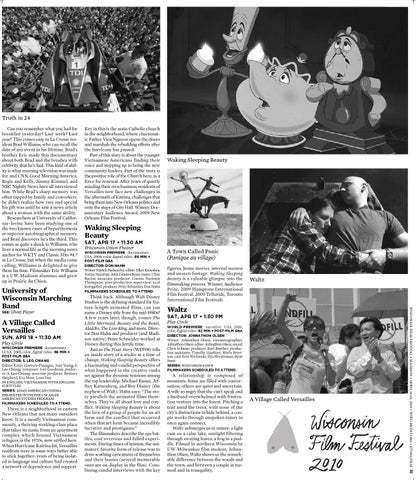 Truth in 24 Can you remember what you had for breakfast yesterday? Last week? Last year? This comes easy to La Crosse resident Brad Williams, who can recall the date of any event in his lifetime. Brad’s brother Eric made this documentary about both Brad and the brushes with celebrity that he’s had. This kind of ability is what morning television was made for, and CNN, Good Morning America, Regis and Kelly, Jimmy Kimmel, and NBC Nightly News have all interviewed him. While Brad’s sharp memory was often tapped by family and coworkers, he didn’t realize how rare and special his gift was until he saw a news article about a woman with the same ability. Researchers at University of California–Irvine have been studying one of the two known cases of hyperthymesia or superior autobiographical memory, and Brad discovers he’s the third. This comes as quite a shock to Williams, who lives a normal life as the morning news anchor for WKTY and Classic Hits 94.7 in La Crosse, but when the media come calling, Williams is delighted to give them his time. Filmmaker Eric Williams is a UW-Madison alumnus and grew up in Prairie du Chien.

Key in this is the main Catholic church in the neighborhood, where charismatic Father Vien Nguyen opens the doors and marshals the rebuilding efforts after the hurricane has passed. Part of this story is about the younger Vietnamese Americans finding their voice and stepping up to being the new community leaders. Part of the story is the positive role of the Church here, as a force for renewal. After years of quietly minding their own business, residents of Versailles now face new challenges in the aftermath of Katrina, challenges that bring them into New Orleans politics and onto the steps of City Hall. Winner, Documentary Audience Award, 2009 New Orleans Film Festival.

There is a neighborhood in eastern New Orleans that not many outsiders know. It is a mostly Vietnamese community, a thriving working-class place that takes its name from an apartment complex which housed Vietnamese refugees in the 1970s, now settled here. When Hurricane Katrina hit, Versailles residents were in some ways better able to stick together: years of being isolated in language and culture had created a network of dependence and support.

Think back. Although Walt Disney Studios is the defining standard for feature-length animated films, can you name a Disney title from the mid-1980s? A few years later, though, comes The Little Mermaid, Beauty and the Beast, Aladdin, The Lion King, and more. Director Don Hahn and producer (and Madison native) Peter Schneider worked at Disney during this fertile time. Just as The Pixar Story (WFF08) tells an inside story of a studio at a time of change, Waking Sleeping Beauty offers a fascinating and candid perspective of what happened in the creative ranks set against the dynamic tensions among the top leadership: Michael Eisner, Jeffrey Katzenberg, and Roy Disney (the nephew of Walt). Hahn says: “The story parallels the animated films themselves. They’re all about love and conflict. Waking Sleeping Beauty is about the love of a group of people for an art form and the conflict that occurred when that art form became incredibly lucrative and prestigious.” The filmmakers describe the ego battles, cost overruns and failed experiments. During times of tension, the animators’ favorite form of release was to draw scathing caricatures of themselves and their bosses (several memorable ones are on display in the film). Combining candid interviews with the key

A relationship is composed of moments. Some are filled with conversation; others are quiet and uncertain. A wife so angry that she can’t speak and a husband overwhelmed with frustration venture into the forest. Pitching a tent amid the trees, with none of the city’s distractions to hide behind, a couple works through unspoken injury to once again connect. Waltz submerges us in nature: a light rain on a calm lake, sunlight filtering through swaying leaves, a frog in a puddle. Filmed in northern Wisconsin by UW-Milwaukee film student, Johnathon Olsen, Waltz shows us the remarkable difference between the woods and the town, and between a couple in turmoil and in tranquility.