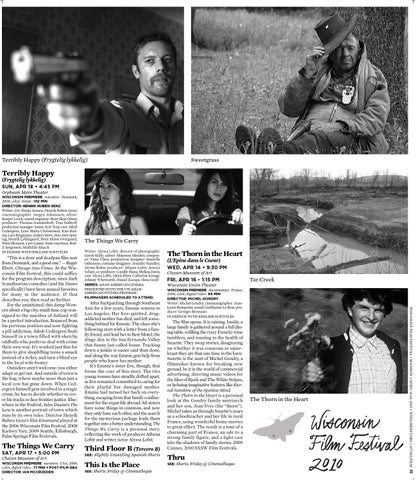 The Thorn in the Heart

After backpacking through Southeast Asia for a few years, Emmie returns to Los Angeles. Her free-spirited, drugaddicted mother has died, and left something behind for Emmie. The clues she’s following start with a letter from a family friend, and lead her to Best Motel, the dingy den in the San Fernando Valley that Sunny last called home. Tracking down a junkie is easier said than done, and along the way Emmie gets help from people who knew her mother. It’s Emmie’s sister Eve, though, that forms the core of this story. The two young women have steadily drifted apart, as Eve remained committed to caring for their playful but damaged mother. Emmie had turned her back on everything, escaping from that family confinement for the expat life abroad. All sisters have some things in common, and now they only have each other, and the search for the mysterious package leads them together into a better understanding. The Things We Carry is a personal story, reflecting the work of producer Athena Lobit and writer/actor Alyssa Lobit.

Third Floor B (Tercero B) SEE:

This Is the Place

The film opens. It is raining. Inside, a large family is gathered around a full dining table, refilling the (very French) wine tumblers, and toasting to the health of Suzette. They swap stories, disagreeing on whether it was couscous or sauerkraut they ate that one time in the barn. Suzette is the aunt of Michel Gondry, a filmmaker known for breaking new ground, be it in the world of commercial advertising, directing music videos for the likes of Bjork and The White Stripes, or helming imaginative features like Eternal Sunshine of the Spotless Mind. The Thorn in the Heart is a personal look at the Gondry family matriarch and her son, Jean-Yves (the “thorn”). Michel takes us through Suzette’s years as a schoolteacher and her life in rural France, using wonderful home-movies to great effect. The result is a tour of a charming part of France, an ode to a strong family figure, and a light cast into the shadows of family stories. 2009 Cannes, 2010 SXSW Film Festivals.

The Thorn in the Heart

“This is a dour and deadpan film noir from Denmark, and a good one.” — Roger Ebert, Chicago Sun-Times. At the Wisconsin Film Festival, this could suffice for the program description, since dark Scandinavian comedies (and the Danes specifically) have been annual favorites for many in the audience. If that describes you, then read no further. For the uninitiated, this damp Western about a big-city, small-time cop reassigned to the marshes of Jutland will be a perfect introduction. Bounced from his previous position and now fighting a pill addiction, Jakob Cedergren finds himself in a town filled with sketchy oddballs who prefer to deal with crime their own way. It’s worked just fine for them to give shoplifting teens a smack instead of a ticket, and turn a blind eye to the local wife-beater. Outsiders aren’t welcome: you either adapt or get out. And outside of town is the bog, where maybe more than just a local cow has gone down. When Cedergren himself gets involved in a tragic crime, he has to decide whether to cover his tracks or face frontier justice. Elsewhere in the Festival, Jules Dassin’s The Law is another portrait of town which runs by its own rules. Director Henrik Ruben Genz’s film Kinamand played at the 2006 Wisconsin Film Festival. 2008 Karlovy Vary, 2009 Seattle, Edinburgh, Palm Springs Film Festivals.

The Things We Carry