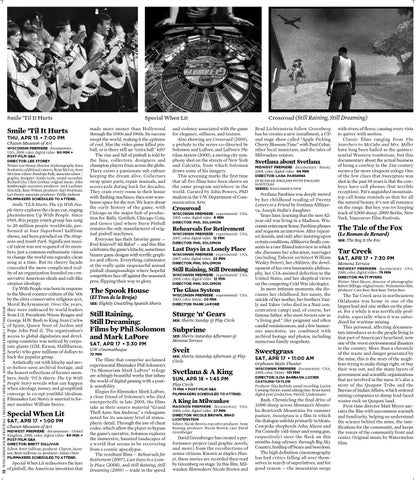 Smile ’Til It Hurts

Smile ’Til It Hurts: The Up With People Story explores the clean-cut, singing phenomenon Up With People. Since 1965, this peppy youth group has sung to 20 million people worldwide, performed at four Superbowl halftime shows, and been parodied on The Simpsons and South Park. Significant musical talent was not required of its members, just a common enthusiastic vision to change the world one squeaky-clean song at a time. But its cheery façade concealed the more complicated reality of an organization founded on conservative American ideals and cult-like utopian ideology. Up With People was born in response to the liberal counter-culture of the ’60s by the ultra-conservative religious sect, Moral ReArmament. Over the years, they were embraced by world leaders from U.S. Presidents Nixon, Reagan and George H.W. Bush to King Juan Carlos of Spain, Queen Noor of Jordon and Pope John Paul II. The organization’s access to global dignitaries and developing countries was noticed by corporate giants (GM, Exxon, Halliburton, Searle) who gave millions of dollars to back the popular group. Artistically cut with kitschy and never-before-seen archival footage, and the honest reflections of former members, Smile ’Til It Hurts: The Up With People Story reveals what can happen when ideology, money and groupthink converge to co-opt youthful idealism. Filmmaker Lee Storey is married to former member William Storey.

Special When Lit rediscovers the lure of pinball, the American invention that

Special When Lit made more money than Hollywood through the 1950s and 1960s. Its success swept the world, making it the epitome of cool. Has the video game killed pinball, or is there still an “extra ball” left? The rise and fall of pinball is told by the fans, collectors, designers and champion players from across the globe. There exists a passionate sub culture keeping the dream alive. Collectors swap spare parts, repair manuals, and scorecards dating back for decades. They cram every room in their house with flashing machines, then rent warehouse space for the rest. We learn about the early history of the game, with Chicago as the major hub of production for Bally, Gottlieb, Chicago Coin, and Genco (and where Stern Pinball remains the only manufacturer of original pinball machines. Everyone has their favorite game — Evel Knievel? Ali Baba? — and this film celebrates the game’s kitschy, sometimes bizarre game designs with terrific graphics and effects. Everything culminates at the really quite suspenseful annual pinball championships where hopeful competitors face off against the seasoned pros, flipping their way to glory.

and violence associated with the game for elegance, stillness, and texture. Also showing are Crossroad (2005), a prelude to the series co-directed by Solomon and LaPore, and LaPore’s The Glass System (2000), a moving city symphony shot on the streets of New York and Calcutta, from which Solomon draws some of his imagery. This screening marks the first time that all five films have been shown on the same program anywhere in the world. Curated by John Powers, PhD student in the UW Department of Communication Arts.

Last Days in a Lonely Place

The films that comprise acclaimed experimental filmmaker Phil Solomon’s “In Memoriam Mark LaPore” trilogy are achingly beautiful works that infuse the world of digital gaming with a poetic sensibility. Elegies for filmmaker Mark LaPore, a close friend of Solomon’s who died unexpectedly in late 2005, the films take as their source material “Grand Theft Auto: San Andreas,” a videogame noted for its uncanny level of atmospheric detail. Through the use of cheat codes, which allow the player to bypass the game’s narrative, Solomon explores the immersive, haunted landscapes of a world that seems to be recovering from a cosmic apocalypse. The resultant films — Rehearsals for Retirement (2007), Last Days in a Lonely Place (2008), and Still Raining, Still Dreaming (2009) — trade in the speed

A King in Milwaukee

David Greenberger has created a performance project (and graphic novels, and more) from the recollections of senior citizens. Known as Duplex Planet, these stories are recorded then read by Greenberg on stage. In this film, Milwaukee filmmakers Nicole Brown and

Svetlana Parshina was deeply moved by her childhood reading of Twenty Letters to a Friend by Svetlana Alliluyeva, Joseph Stalin’s daughter. Years later, learning that the now 82year-old was living in a Madison, Wisconsin retirement home, Parshina phones and requests an interview. After repeated denials, and only after insisting upon certain conditions, Alliluyeva finally consents to a rare filmed interview in which she discusses her education, marriages (including Taliesin architect William Wesley Peters), her children, the development of her own humanistic philosophy, her CIA-assisted defection to the United States, and her skeptical views on the competing Cold War ideologies. In more intimate moments, she discusses her childhood, her nanny, the suicide of her mother, her brothers Vasily and Yakov (who died in a Nazi concentration camp) and, of course, her famous father, who most Soviets saw as “a living god.” Her poignant and often candid reminiscences, and a few humorous anecdotes, are combined with archival footage and photos, including numerous family snapshots.

Baah. Chronicling the final drive of 3,000 sheep across Montana’s Absaroka-Beartooth Mountains for summer pasture, Sweetgrass is a film in which the dialogue unfolds primarily in bleats. Cowpoke shepherds John Ahern and Pat Connolly (old-timer and young gun, respectively) steer the flock on this months-long odyssey through Big Sky Country, fending off bears and boredom. The high definition cinematography has had critics falling all over themselves in search of superlatives, and for good reason — the mountains surge

with rivers of fleece, causing every vista to quiver with motion. Classic films ranging from The Searchers to McCabe and Mrs. Miller have long been hailed as the quintessential Western tombstone, but this documentary about the actual business of being a cowboy in the 21st century seems a far more eloquent eulogy. One of the few clues that Sweetgrass was shot in the past 50 years is that the cowboys have cell phones (but terrible reception). Pat’s anguished mountaintop call home reminds us that for all the natural beauty, it’s not all romance on the range. But hey, you try keeping track of 3,000 sheep. 2009 Berlin, New York, Vancouver Film Festivals.

The Tale of the Fox (Le Roman de Renard) SEE: The Bug &amp; the Fox

The Tar Creek area in northeastern Oklahoma was home to one of the largest lead and zinc strikes on the planet. For a while it was terrifically profitable, especially when it was subsidized for wartime mining. This personal, affecting documentary introduces us to the people living in that part of American’s heartland, now one of the worst environmental disasters in the country. More than a chronicle of the waste and danger generated by the mine, this is the story of the neighbors trying to make things right, or buy their way out, and the many layers of government and scientific organizations that are involved in the mess. It’s also a story of the Quapaw Tribe and the Bureau of Indian Affairs, which ordered mining companies to dump lead-laced waster rock on Quapaw land. First-time director Matt Myers narrates the film with uncommon warmth and familiarity, helping us understand the science behind the mine, the ramifications for the community, and keeps the voices of the community front and center. Original music by Watermelon Slim.