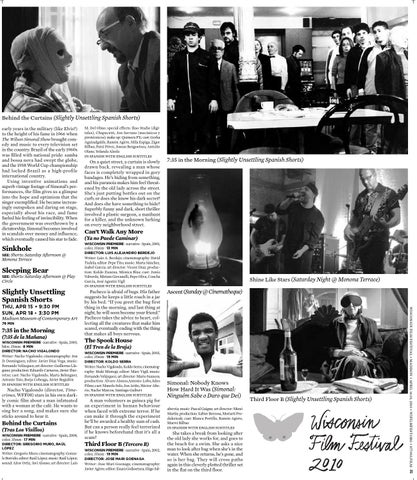 Behind the Curtains (Slightly Unsettling Spanish Shorts) early years in the military (like Elvis?) to the height of his fame in 1966 when The Wilson Simonal Show brought comedy and music to every television set in the country. Brazil of the early 1960s was filled with national pride: samba and bossa nova had swept the globe, and the 1958 World Cup championship had locked Brazil as a high-profile international country. Using inventive animations and superb vintage footage of Simonal’s performances, the film gives us a glimpse into the hope and optimism that the singer exemplified. He became increasingly outspoken and daring on stage, especially about his race, and fame fueled his feeling of invincibility. When the government was overthrown by a dictatorship, Simonal becomes involved in scandals over money and influence, which eventually caused his star to fade.

On a quiet street, a curtain is slowly drawn back, revealing a man whose faces is completely wrapped in gory bandages. He’s hiding from something, and his paranoia makes him feel threatened by the old lady across the street. She’s just putting bottles out on the curb, or does she know his dark secret? And does she have something to hide? Superbly funny and dark, short thriller involved a plastic surgeon, a manhunt for a killer, and the unknown lurking on every neighborhood street.

Nacho Vigalondo (director, Timecrimes, WFF08) stars in his own darkly comic film about a man infatuated with a woman at the café. He wants to sing her a song, and makes sure she sticks around to hear it.

A man volunteers as guinea pig for an experiment in human behaviour when faced with extreme terror. If he can make it through the experiment he’ll be awarded a healthy sum of cash. But can a person really feel terrorized if he knows beforehand that it’s all a scam?

She takes a break from looking after the old lady she works for, and goes to the beach for a swim. She asks a nice man to look after bag when she’s in the water. When she returns, he’s gone, and so is her bag. They will cross paths again in this cleverly plotted thriller set in the flat on the third floor.

Pacheco is afraid of bugs. His father suggests he keeps a little roach in a jar by his bed. “If you greet the bug first thing in the morning, and last thing at night, he will soon become your friend.” Pacheco takes the advice to heart, collecting all the creatures that make him scared, eventually ending with the thing that makes all boys nervous.