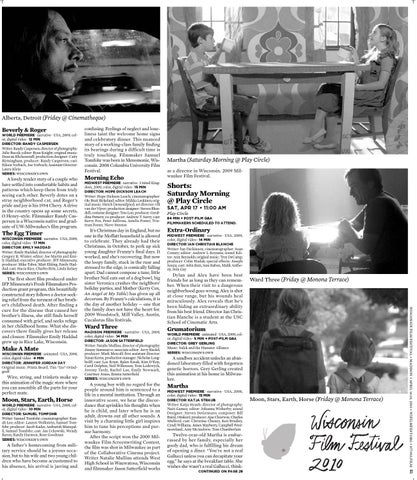 A lovely tender story of a couple who have settled into comfortable habits and patterns which keep them from truly seeing each other. Beverly dotes on a stray neighborhood cat, and Roger’s pride and joy is his 1954 Chevy. A drive in the country opens up some secrets, O Henry-style. Filmmaker Randy Caspersen is a Wisconsin native and graduate of UW-Milwaukee’s film program.

Wire, string, and trinkets make up this animation of the magic store where you can assemble all the parts for your perfect mate.

A father’s homecoming from military service should be a joyous occasion, but to his wife and two young children who have become accustomed to his absence, his arrival is jarring and

It’s Christmas day in England, but no one in the Moffatt household is allowed to celebrate. They already had their Christmas, in October, to perk up sick young daughter Franny’s final days. It worked, and she’s recovering. But now the loopy family, stuck in the ruse and stressed to the edge, is comically falling apart. Dad cannot compose a tune, little brother Neil eats out of a dog bowl, big sister Veronica crashes the neighbors’ holiday parties, and Mother (Kerry Cox, An Angel at My Table) has given up all decorum. By Franny’s calculations, it is the day of another holiday — one that the family does not have the heart for. 2009 Woodstock, Mill Valley, Austin, Cucalorus film festivals.

A young boy with no regard for the people around him is sentenced to a life in a mental institution. Through an innovative score, we hear the discordance that sprinkles his thoughts when he is child, and later when he is an adult, drowns out all other sounds. A visit by a charming little girl inspires him to tune his perceptions and pursue harmony. After the script won the 2009 Milwaukee Film Screenwriting Contest, the film was shot in Milwaukee as part of the Collaborative Cinema project. Writer Natalie Mullins attends West High School in Wauwatosa, Wisconsin and filmmaker Jason Satterfield works

Dylan and Alex have been best friends for as long as they can remember. When their visit to a dangerous neighborhood goes wrong, Alex is shot at close range, but his wounds heal miraculously. Alex reveals that he’s been hiding an extraordinary ability from his best friend. Director Ian Christian Blanche is a student at the USC School of Cinematic Arts.

Twelve-year-old Martha is embarrassed by her family, especially her goofy dad, who is fulfilling his dream of opening a diner. “You’re not a real Gallucci unless you can decapitate your egg,” he says at the breakfast table. She wishes she wasn’t a real Gallucci, think-

The first short film produced under IFP Minnesota’s Fresh Filmmakers Production grant program, this beautifully constructed story follows a doctor seeking relief from the torment of her brother’s childhood death. After finding a cure for the disease that caused her brother’s illness, she still finds herself consumed with grief, and seeks refuge in her childhood home. What she discovers there finally gives her release and closure. Filmmaker Emily Haddad grew up in Rice Lake, Wisconsin.

confusing. Feelings of neglect and loneliness taint the welcome home signs and celebratory dinner. This nuanced story of a working-class family finding its bearings during a difficult time is truly touching. Filmmaker Samuel Tomfohr was born in Menomonie, Wisconsin. 2008 Columbia University Film Festival.

Music: Sulek and the Hamster Alliance SERIES: WISCONSIN’S OWN

A sandbox accident unlocks an abandoned laboratory filled with forgotten genetic horrors. Grey Gerling created this animation at his home in Milwaukee.