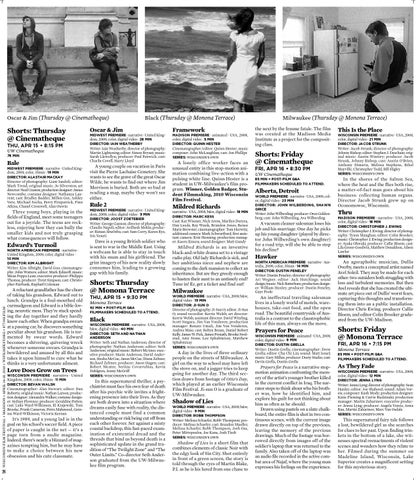 Three young boys, playing in the fields of England, meet some teenagers out for a joyride. The teens are reckless, enjoying how they can bully the smaller kids and not truly grasping what consequences will follow.

A reluctant grandfather has the chore of taking his grandson, Edward out to lunch. Grandpa is a foul-mouthed old curmudgeon and Edward is a bible-loving, neurotic mess. They’re stuck spending the day together and they hardly know each other. When grandpa swears at a passing car, he discovers something peculiar about his grandson. He is tormented by swear words. Edward becomes a shivering, quivering wreck whenever someone swears. Grandpa is bewildered and amused by all this and takes it upon himself to cure what he thinks is a very unfortunate ailment.

Love Does Grow on Trees

It’s 1989, and a young lad is in the goal on his school’s soccer field. A piece of paper is caught in the net — it’s a page torn from a nudie magazine. Indeed, there’s nearly a blizzard of magazines tempting him, but he may have to make a choice between his new obsession and his cute classmate.

Milwaukee (Thursday @ Monona Terrace) the next by the femme fatale. The film was created at the Madison Media Institute as a project for the compositing class.

In the shores of the Salton Sea, where the heat and the flies both rise, a matter-of-fact man goes about his business: collecting human organs. Director Jacob Strunk grew up on Oconomowoc, Wisconsin.

A young couple on vacation in Paris visit the Pierre Lachaise Cemetery. She wants to see the grave of the great Oscar Wilde, he wants to find out where Jim Morrison is buried. Both are so bad at reading a map, maybe they won’t see either.

Dave is a young British soldier who is sent to war in the Middle East. Using a webcam he is able to stay in touch with his mum and his girlfriend. The grim imagery of his new reality slowly consumes him, leading to a growing gap with his family.

In this supernatural thriller, a psychiatrist must face his own fear of death after his psychic wife invites a frightening presence into their lives. As they are both drawn into a situation where dreams easily fuse with reality, the distanced couple must find a common understanding or risk being cut off from each other forever. Set against a misty coastal backdrop, this fast-paced examination of existential dread and the threads that bind us beyond death is a sophisticated update in the grand tradition of “The Twilight Zone” and “The Outer Limits.” Co-director Seth Anderson graduated from the UW-Milwaukee film program.

Mildred Richards is an inventive black-and-white drama set to a vintage radio play. Old lady Richards is sick, and her ambitious niece and nephew are coming to the dark mansion to collect an inheritance. But are they greedy enough to hasten their aunt to an untimely end? Tune in! Er, get a ticket and find out!

A day in the lives of three ordinary people on the streets of Milwaukee. A girl on the way to school may have left the stove on, and a jogger tries to keep going for another day. The third section draws from footage of Otto’s Day, which played at an earlier Wisconsin Film Festival. Ji-sun O is a graduate of UW-Milwaukee.

Shadow of Lies is a short film that combines elements of classic Noir with the edgy look of Sin City. Shot entirely in front of a green screen, the story is told through the eyes of Martin Blake, P.I. as he is his lured from one chase to

A vacuum cleaner salesman loses his job and his marriage. One day he picks up his young daughter (played by director John Wilberding’s own daughter) for a road trip; will she be able to stop his decline?

An ineffectual traveling salesman lives in a lonely world of motels, warehouses, take-out food, and the open road. The beautiful countryside of Australia is a contrast to the claustrophobic life of this man, always on the move.

This Is the Place

An agoraphobic musician, Dullis Overby, meets a conceptual artist named Avel Soleil. They may be made for each other: two outsiders both struggling with loss and turbulent memories. But then Avel reveals that she has created the ultimate art piece out of Dullis’ worst fears, capturing this thoughts and transforming them into an a public installation. Director Chris Ewing, producer Callie Bloem, and editor Colin Brooker graduated from the UW-Madison.

Prayers for Peace is a narrative stopmotion animation confronting the memory of the artist’s younger brother killed in the current conflict in Iraq. The narrator stops to think about who his brother was, how he identified him, and explore his guilt for not thinking about him as often as he should. Drawn using pastels on a slate chalkboard, the entire film is shot in two continuous scenes, with the current image drawn directly on top of the previous, leaving the memory of the previous drawings. Much of the footage was borrowed directly from images off of the soldier’s laptop that was returned to the family. Also taken off of the laptop was an audio file recorded in the active combat area of Najaf, where the young man expresses his feelings on the experience.

This supernatural fairy tale follows a lost, bewildered girl as she searches for clues to her past. Upon finding trinkets in the bottom of a lake, she witnesses spectral reenactments of violent scenes and wonders how they relate to her. Filmed during the summer on Madeline Island, Wisconsin, Lake Superior creates a magnificent setting for this mysterious story.