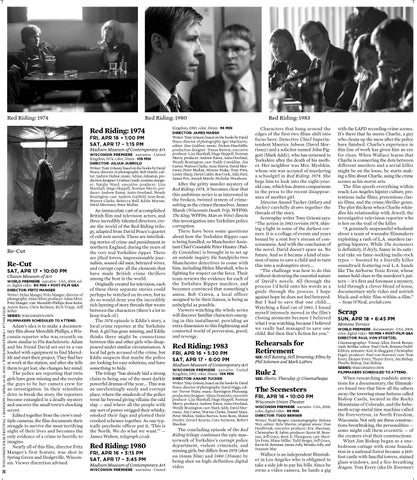 Adam’s idea is to make a documentary film about Meredith Phillips, a Wisconsin reporter who was recently on show similar to The Bachelorette. Adam and his friend David set out in a van loaded with equipment to find Meredith and start their project. They find her at work at the station, and after she tells them to get lost, she changes her mind. The police are reporting that twin girls have gone missing and she recruits the guys to be her camera crew for an investigation. In their relentless drive to break the story, the reporters become entangled in a deadly mystery and uncover the small town’s shocking secret. Edited together from the crew’s multiple cameras, the film documents their struggle to survive the most terrifying night of their lives and becomes the only evidence of a crime to horrific to imagine. Nearly all of this film, director Fritz Manger’s first feature, was shot in Spring Green and Dodgeville, Wisconsin. Viewer discretion advised.

An immaculate cast of accomplished British film and television actors, and three incredibly talented directors, create the world of the Red Riding trilogy, adapted from David Peace’s quartet of cult noir novels. These are interlinking stories of crime and punishment in northern England, during the years of the very real Yorkshire ripper. There are jilted lovers, impressionable journalists, soused old men, betrayed wives, and corrupt cops: all the elements that have made British crime thrillers among the best in the world. Originally created for television, each of these three separate stories could perhaps be watched on its own, but to do so would deny you the incredibly rich layering of story threads that weave between the characters (there’s a lot to keep track of.) The 1974 episode is Eddie’s story, a local crime reporter at the Yorkshire Post. A girl has gone missing, and Eddie thinks there might be connections between this and other girls who disappeared under similar circumstances. A local lad gets accused of the crime, but Eddie suspects that maybe the police are looking for easy solutions, and have something to hide. The trilogy “has already laid a strong claim to being one of the most darkly powerful dramas of the year.... This was an unrelentingly seedy and corrupt place, where the misdeeds of the police went far beyond giving villains the odd slap — and where all the people with any sort of power swigged their whisky, smoked their fags and plotted their crooked schemes together. As one typically psychotic officer put it, ‘This is the North. We do what we want.’” — James Walton, telegraph.co.uk.

After the gritty murder mystery of Red Riding: 1974, it becomes clear that this ambitious series is as interested in the broken, twisted system of crimesolving as the crimes themselves. James Marsh (Wisconsin Death Trip, WFF00; The King, WFF06; Man on Wire) directs this investigation into Yorkshire police corruption. There have been some questions about how the Yorkshire Ripper case is being handled, so Manchester Assistant Chief Constable Peter Hunter (Paddy Considine) is brought in to set up an outside inquiry. He handpicks two Manchester detectives to come with him, including Helen Marshall, who is fighting for respect on the force. Their team reviews the evidence for each of the Yorkshire Ripper murders, and becomes convinced that something’s amiss. Bob Craven, a local officer assigned to be their liaison, is being as unhelpful as possible. Viewers watching the whole series will discover familiar characters emerging in this installment, providing an extra dimension to this frightening and contorted world of perversion, greed, and revenge.

The concluding episode of the Red Riding trilogy continues the epic masterwork of Yorkshire’s corrupt police department, violent criminals, and missing girls, but differs from 1974 (shot on 16mm film) and 1980 (35mm) by being shot on high-definition digital video.

Red Riding: 1983 Characters that hung around the edges of the first two films shift into focus here: Detective Chief Superintendent Maurice Jobson (David Morrissey) and a solicitor named John Piggott (Mark Addy), who has returned to Yorkshire after the death of his mother. Her neighbor was Mrs. Myshkin, whose son was accused of murdering a schoolgirl in Red Riding: 1974. She begs him to look into the eight-yearold case, which has drawn comparisons in the press to the recent disappearance of another girl. Director Anand Tucker (Hilary and Jackie) carefully draws together the threads of the story. Screenplay writer Tony Grisoni says: “The action in 1983 revisits 1974, shining a light in some of the darkest corners. It is a collage of events and years bound by a rent boy’s stream of consciousness. And with the conclusion of the novel, David doesn’t spare us. No future. And so it became a kind of mission of mine to save a child and to turn this into a redemptive story.... “The challenge was how to do this without destroying the essential nature of David’s novels. All through the process I’d held onto his words as a guide through the process. I hope against hope he does not feel betrayed. But I had to save that one child.... Watching a final cut of 1983, I found myself intensely moved in the film’s closing moments because I believed what I was watching, because I believed we really had managed to save one child. But then that’s fiction for you.”

Wallace is an independent filmmaker in Los Angeles who is obligated to take a side job to pay his bills. Since he owns a video camera, he lands a gig

with the LAPD recording crime scenes. It’s there that he meets Charlie, a guy who cleans up the mess after the police have finished. Charlie’s experience in this line of work has given him an eye for clues. When Wallace learns that Charlie is connecting the dots between different murders and a serial killer might be on the loose, he starts making a film about Charlie, using the crime scenes as his movie sets. The film spoofs everything within reach: Los Angeles hipster culture, pretentious indie films, pretentious classic films, and the crime/thriller genre. The plot thickens when Charlie rekindles his relationship with Jewell, the investigative television reporter who is hot on the trail of the killer. “A genuinely suspenseful whodunit about a team of wannabe filmmakers exploiting a rash of L.A. murders targeting hipsters. While The Scenesters is definitely, if dryly, funny in its satirical take on fame-seeking indie-rock types — boosted by a literally killer soundtrack featuring real L.A. bands like The Airborne Toxic Event, whose names hold clues to the murderer’s pattern — it’s first and foremost a mystery, told through a clever blend of tense, documentary-style video and noirish black-and-white film-within-a-film.” — Sean O’Neal, avclub.com.

When researching roadside attractions for a documentary, the filmmakers found two that blew all the others away: the towering stone fortress called Bishop Castle, located in the Rocky Mountains of Colorado, and the behemoth scrap-metal time machine called the Forevertron, in North Freedom, Wisconsin. Not only are these constructions breathtaking, the personalities — some might call them eccentric — of the creators rival their constructions. What Jim Bishop began as a onebedroom cottage with stone foundation in a national forest became a 160foot castle with fanciful towers, stained glass windows, and a fire-breathing dragon. Tom Every (aka Dr. Evermor)