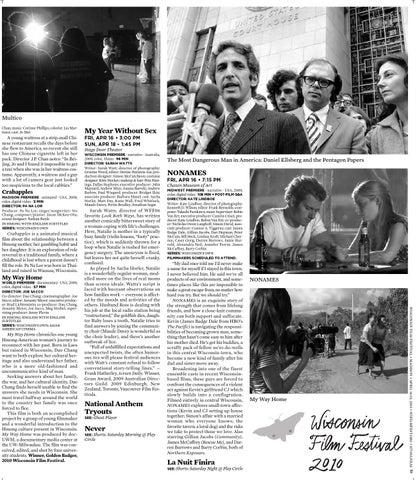 A young waitress at a strip-mall Chinese restaurant recalls the days before she flew to America, so recent she still has one Chinese cigarette left in her pack. Director J.P. Chan notes: “In Beijing, Jo and I found it impossible to get a taxi when she was in her waitress costume. Apparently, a waitress and a guy with a lot of camera gear just looked too suspicious to the local cabbies.”

Crabapples is a animated musical film about the relationship between a Hmong mother, her gambling habit and her daughter. It is an exploration of role reversal in a traditional family, where a childhood is lost when a parent doesn’t fill the role. Pa Na Lor was born in Thailand and raised in Wausau, Wisconsin.

My Way Home chronicles one young Hmong-American woman’s journey to reconnect with her past. Born in Laos but raised in Wisconsin, Dao Chang want to both explore her cultural heritage and also understand her father, who is a more old-fashioned and uncommunicative kind of man. Seeking answers about her family, the war, and her cultural identity, Dao Chang finds herself unable to find the answers she needs in Wisconsin. She must travel halfway around the world to the country her family was once forced to flee. This film is both an accomplished project by a group of young filmmaker and a wonderful introduction to the Hmong culture present in Wisconsin. My Way Home was produced by docUWM, a documentary media center at the UW-Milwaukee. The film was conceived, edited, and shot by four university students. Winner, Golden Badger, 2010 Wisconsin Film Festival.

Sarah Watts, director of WFF06 favorite Look Both Ways, has written another comically bittersweet story of a woman coping with life’s challenges. Here, Natalie is mother in a typically busy family (violin lessons, “footy” practice), which is suddenly thrown for a loop when Natalie is rushed for emergency surgery. The aneurysm is fixed, but leaves her not quite herself: cranky, confused. As played by Sacha Horler, Natalie is a wonderfully regular woman, modelled more on the lives of real moms than screen ideals. Watts’s script is laced with buoyant observations on how families work — everyone is affected by the moods and activities of the others. Husband Ross is dealing with his job at the local radio station being “restructured,” the goldfish dies, daughter Ruby loses a tooth, Natalie tries to find answers by joining the community choir (Maude Davey is wonderful as the choir leader), and there’s another outbreak of lice. “Full of unfulfilled expectations and unexpected twists, the often humorous Sex will please festival audiences with Watt’s constant refusal to follow conventional story-telling lines.” — Frank Hatherley, Screen Daily. Winner, Grass Award, 2009 Australian Directors Guild. 2009 Edinburgh, New Zealand, Toronto, Vancouver Film Festivals.

The Most Dangerous Man in America: Daniel Ellsberg and the Pentagon Papers

“My dad once told me I’d never make a name for myself if I stayed in this town. I never believed him. He said we’re all products of our environment, and sometimes places like this are impossible to make a great escape from, no matter how hard you try. But we should try.” NONAMES is an exquisite story of the strength that comes from lifelong friends, and how a close-knit community can both support and suffocate. Kevin (James Badge Dale from HBO’s The Pacific) is navigating the responsibilities of becoming grown man, something that hasn’t come easy to him after his mother died. He’s got his buddies, a scruffy pack of fellow ne’er-do-wells in this central Wisconsin town, who become a new kind of family after his dad and sister move away. Broadening into one of the finest ensemble casts in recent Wisconsinbased films, these guys are forced to confront the consequences of a violent act against Kevin’s girlfriend CJ which slowly builds into a conflagration. Filmed entirely in central Wisconsin, NONAMES explores small-town affections (Kevin and CJ setting up house together; Simon’s affair with a married woman who everyone knows; the favorite tavern; a loyal dog) and the risks we take to protect those we love. Also starring Gillian Jacobs (Community), James McCaffrey (Rescue Me), and Darren Burrows and Barry Corbin, both of Northern Exposure.

My Year Without Sex