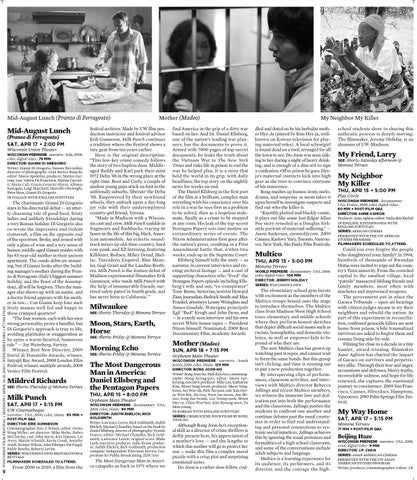 IN ITALIAN WITH ENGLISH SUBTITLES

The charismatic Gianni Di Gregorio stars in his directorial debut — an utterly charming tale of good food, feisty ladies and unlikely friendships during a very Roman holiday. Di Gregorio also co-wrote the impressive and violent Gomorrah, a film on the opposite end of the spectrum. Broke, and armed with only a glass of wine and a wry sense of humor, middle-aged Gianni resides with his 93-year-old mother in their ancient apartment. The condo debts are mounting, but if Gianni looks after the building manager’s mother during the Pranzo di Ferragosto (Italy’s biggest summer holiday, and the Feast of the Assumption), all will be forgiven. Then the manager also shows up with an auntie, and a doctor friend appears with his mother in tow.... Can Gianni keep four such lively mamas well fed and happy in these cramped quarters? “The four women, each with her own strong personality, prove a handful, but Di Gregorio’s approach is true to life, avoiding platitudes or exaggeration as he spins a warm-hearted, humorous tale.” — Jay Weissberg, Variety. Winner, Best New Director, 2009 David di Donatello Awards; winner, Satyajit Ray Award, 2008 London Film Festival; winner, multiple awards, 2008 Venice Film Festival.

festival archives. Made by UW film production instructor and festival advisor Erik Gunneson, Milk Punch continues a tradition where the Festival shows a rare gem from ten years earlier. Here is the original description: “This low-key crime comedy follows the story of two hapless duos. Middleaged Buddy and Karl park their mint 1972 Delta ’88 in the wrong place at the right time. Boot and Curly, a couple of aimless young guns stuck on foot in the unfriendly suburbs, ‘liberate’ the Delta ’88. Empowered by their newfound wheels, they embark upon a day-long joy ride with their underemployed country-girl friend, Verona. “Made in Madison with a Wisconsin cast and crew, Milk Punch unfolds in fragments and flashbacks, tracing 36 hours in the life of this big, black, American automobile. An eclectic soundtrack mixes up old-time country, hard core punk, and EZ listening, featuring Killdozer, Rednex, Mikey Dread, Shellac, Tuscadero, Esquivel, Blue Meanies, Gogi Grant and the Landine Brothers. Milk Punch is the feature debut of Madison experimental filmmaker Erik Gunneson, who ‘made Milk Punch with the help of innumerable friends, survived safety patrol in fourth grade, and has never been to California.’ ”

My Neighbor My Killer

find America in the grip of a dirty war based on lies. And Dr. Daniel Ellsberg, one of the nation’s leading war planners, has the documents to prove it. Armed with 7000 pages of top-secret documents; he leaks the truth about the Vietnam War to The New York Times and risks life in prison to end the war he helped plan. It is a story that held the world in its grip, with daily headlines, the top story on the nightly news for weeks on end. The Daniel Ellsberg in the first part of the film is a brilliant, complex man wrestling with his conscience over his role in a war he sees first as a problem to be solved, then as a hopeless stalemate, finally as a crime to be stopped at any costs. His leak of the top-secret Pentagon Papers sets into motion an extraordinary series of events. The Nixon Administration first goes after the nation’s press, resulting in a First Amendment battle that, within two weeks, ends up in the Supreme Court. Ellsberg himself tells the story — as narrator, in current interviews and riveting archival footage — and a cast of supporting characters who “lived” the Pentagon Papers episode including Ellsberg’s wife and son, “co-conspirator” Tony Russo, historian/activist Howard Zinn, journalists Hedrick Smith and Max Frankel, attorneys Lenny Weinglass and James Goodale, Watergate principals Egil “Bud” Krogh and John Dean, and — in a rarely seen interview and his own secret White house tapes — President Nixon himself. Nominated, 2009 Best Documentary Film, Academy Awards.

Although Bong Joon-ho’s exceptional skill as a director of crime thrillers is deftly present here, his appreciation of a mother’s love — and the lengths to which this mother will go to protect her son — make this film a complex moral puzzle with a crisp plot and surprising emotional notes. Do-Joon is a rather slow fellow, cod-

dled and doted on by his herbalist mother Hye-Ja (played by Kim Hye-ja, wellknown on Korean television for playing maternal roles). A local schoolgirl is found dead on a roof, arranged for all the town to see. Do-Joon was seen talking to her during a night of heavy drinking, and is enough of a dim-wit to sign a confession. Off to prison he goes. Hyeja’s maternal instincts kick into high gear as she tries to convince everyone of his innocence. Bong mashes up humor, irony, melodrama, and suspense as mom takes it upon herself to investigate suspects and find out who the killer is. “Knottily plotted and blackly comic, it plays out like some lost Edgar Allan Poe story retooled as a Douglas Sirkstyle portrait of maternal suffering.” — Jason Anderson, eyeweekly.com. 2009 Cannes, Karlovy Vary, Toronto, Vancouver, New York, São Paulo Film Festivals.

The elementary school gym bursts with excitement as the members of the Multico troupe bound onto the stage to introduce themselves. The Multico class from Madison West High School tours elementary and middle schools where they perform honest sketches that depict difficult social issues such as racism, homophobia, and domestic violence, as well as empower kids to be proud of who they are. The new Multico class has grown up watching past troupes, and cannot wait to form the same bonds. But this group isn’t clicking, and time is running out to put a new production together. By interspersing clips of performances, classroom activities, and interviews with Multico director Rebecca Jallings and recent Multico members, we witness the immense love and dedication put into both the performance and the classroom. Jallings pushes the students to confront one another and continue debates past the usual courtesies in order to find real understanding and personal connections to systemic social injustices. Jallings achieves this by ignoring the usual pretenses and formalities of a high school classroom, and some of the conversations include adult subjects and language. Multico is a learning experience for its audience, its performers, and its director, and the courage the high-

school students show in sharing this authentic process is deeply moving. The filmmaker, Jeremy Holiday, is an alumnus of UW-Madison.

My Neighbor My Killer

Could you ever forgive the people who slaughtered your family? In 1994, hundreds of thousands of Rwandan Hutus were incited to wipe out the country’s Tutsi minority. From the crowded capital to the smallest village, local “patrols” massacred lifelong friends and family members, most often with machetes and improvised weapons. The government put in place the Gacaca Tribunals — open-air hearings with citizen-judges meant to try their neighbors and rebuild the nation. As part of this experiment in reconciliation, confessed genocide killers are sent home from prison, while traumatized survivors are asked to forgive them and resume living side-by-side. Filming for close to a decade in a tiny hamlet, award-winning filmmaker Anne Aghion has charted the impact of Gacaca on survivors and perpetrators alike. Through their fear and anger, accusations and defenses, blurry truths, inconsolable sadness, and hope for life renewed, she captures the emotional journey to coexistence. 2009 San Francisco, Cannes, Silverdocs, Hamptons, Vancouver, 2010 Palm Springs Film Festival.