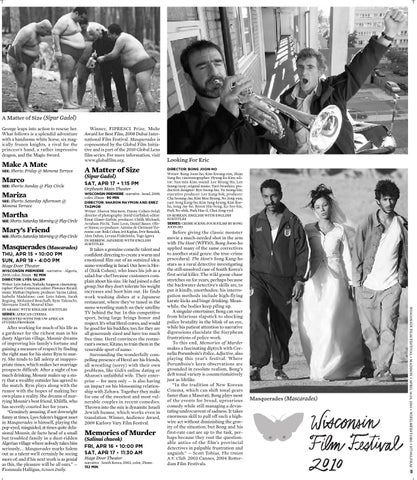 A Matter of Size (Sipur Gadol) George leaps into action to rescue her. What follows is a splendid adventure with a handsome white horse, six magically frozen knights, a rival for the princess’s hand, a rather impressive dragon, and the Magic Sword.

After working for much of his life as a gardener for the richest man in his dusty Algerian village, Mounir dreams of improving his family’s fortune and gaining a measure of respect by finding the right man for his sister Rym to marry. She tends to fall asleep at inappropriate times, which makes her marriage prospects difficult. After a night of too much drinking, Mounir makes up a story that a wealthy outsider has agreed to the match. Rym plays along with the rumor with the hopes of making her own plans a reality. She dreams of marrying Mounir’s best friend, Khliffa, who has secretly courted her for years. “Genuinely amusing, if not downright funny at times, Lyes Salem’s biggest asset in Masquerades is himself, playing the pop-eyed, misguided, at times quite delusional Mounir, de facto head of a small but troubled family in a dust-ridden Algerian village where nobody takes him seriously.... Masquerades marks Salem out as a talent we’ll certainly be seeing more of; and if his next work is as genial as this, the pleasure will be all ours.” — Fionnuala Halligan, Screen Daily.

It takes a genuine comedic talent and confident directing to create a warm and emotional film out of an outsized idea: sumo wrestling in Israel. Our hero is Herzl (Itzik Cohen), who loses his job as a salad-bar chef because customers complain about his size. He had joined a diet group, but they don’t tolerate his weight increases and boot him out. He finds work washing dishes at a Japanese restaurant, where they’ve tuned in the sumo wrestling match on their satellite TV behind the bar. In this competitive sport, being large brings honor and respect. It’s what Herzl craves, and would be good for his buddies, too, for they are all generously sized and have too much free time. Herzl convinces the restaurant’s owner, Kitano, to train them in the venerable sport of sumo. Surrounding the wonderfully compelling presence of Herzl are his friends, all wrestling (sorry) with their own problems, like Gidi’s online dating or Aharon’s unfaithful wife. Their enterprise — for men only — is also having an impact on his blossoming relationship with Zehava. Together they make for one of the sweetest and most vulnerable couples in recent comedies. Thrown into the mix is dynamite Israeli Jewish humor, which works even in translation. Winner, Audience Award, 2009 Karlovy Vary Film Festival.

Before giving the classic monster movie a much-needed shot in the arm with The Host (WFF10), Bong Joon-ho applied many of the same correctives to another staid genre: the true-crime procedural. The Host’s Song Kang-ho stars as a rural detective investigating the still-unsolved case of South Korea’s first serial killer. The wild goose chase stretches on for years, perhaps because the backwater detective’s skills are, to put it kindly, unorthodox: his interrogation methods include high-flying karate kicks and binge drinking. Meanwhile, the bodies keep piling up. A singular entertainer, Bong can veer from hilarious slapstick to shocking police brutality in the blink of an eye, while his patient attention to narrative digressions elucidate the Sisyphean frustrations of police work. To this end, Memories of Murder makes a fascinating diptych with Corneliu Porumboiu’s Police, Adjective, also playing this year’s festival. Where Porumboiu’s keen observations are grounded in resolute realism, Bong’s deft tonal variety is counterintuitively just as lifelike. “In the tradition of New Korean Cinema, which can shift tonal gears faster than a Maserati, Bong plays most of the events for broad, uproarious comedy while still managing a devastating undercurrent of sadness. It takes enormous skill to pull off such a highwire act without diminishing the gravity of the situation, but Bong and his first-rate cast are up to the task, perhaps because they root the questionable antics of the film’s provincial detectives in palpable frustration and anguish.” — Scott Tobias, The Onion A.V. Club. 2003 Cannes, 2004 Rotterdam Film Festivals.