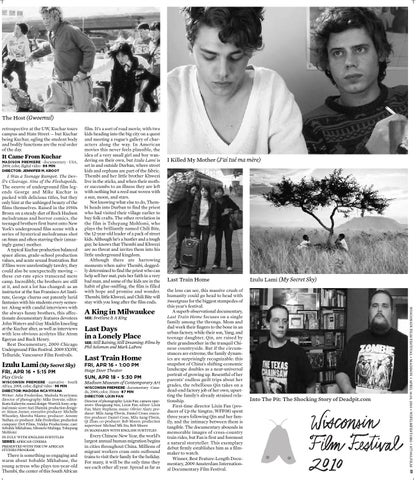 The Host (Gwoemul) retrospective at the UW, Kuchar tours campus and State Street — but Kuchar being Kuchar, ogling the student body and bodily functions are the real order of the day.

It Came From Kuchar

There is something so engaging and warm about Sobahle Mkhabase, the young actress who plays ten-year-old Thembi, the center of this South African

A King in Milwaukee SEE: Svetlana &amp; A King

Last Days in a Lonely Place

Every Chinese New Year, the world’s largest annual human migration begins in cities throughout China. Millions of migrant workers cram onto outbound trains to visit their family for the holiday. For many, it will be the only time they see each other all year. Spread as far as

Last Train Home the lens can see, this massive crush of humanity could go head to head with Sweetgrass for the biggest stampedes of this year’s festival. A superb observational documentary, Last Train Home focuses on a single family among the throngs. Mom and dad work their fingers to the bone in an urban factory, while their son, Yang, and teenage daughter, Qin, are raised by their grandmother in the tranquil Chinese countryside. But if the circumstances are extreme, the family dynamics are surprisingly recognizable: this snapshot of China’s shifting economic landscape doubles as a near-universal portrait of growing up. Resentful of her parents’ endless guilt trips about her grades, the rebellious Qin takes on a dead-end factory job of her own, upsetting the family’s already strained relationship. First-time director Lixin Fan (producer of Up the Yangtze, WFF08) spent three years following Qin and her family, and the intimacy between them is tangible. The documentary abounds in memorable images of cross-country train rides, but Fan is first and foremost a natural storyteller. This exemplary debut firmly establishes him as a filmmaker to watch. Winner, Best Feature-Length Documentary, 2009 Amsterdam International Documentary Film Festival.

Into The Pit: The Shocking Story of Deadpit.com

I Was a Teenage Rumpot. The Devil’s Cleavage. Sins of the Fleshapoids. The oeuvre of underground film legends George and Mike Kuchar is packed with delicious titles, but they only hint at the unhinged beauty of the films themselves. Raised in the 1950s Bronx on a steady diet of Rock Hudson melodramas and horror comics, the teenaged brothers first burst onto New York’s underground film scene with a series of hysterical melodramas shot on 8mm and often starring their (amazingly game) mother. A typical Kuchar production balanced space aliens, grade-school production values, and acute sexual frustration. But if films were unrelentingly tawdry, they could also be unexpectedly moving — these cut-rate epics transcend mere camp. Incredibly, the brothers are still at it, and not a lot has changed: as an instructor at the San Fransisco Art Institute, George churns out patently lurid fantasies with his students every semester. Along with candid interviews with the always funny brothers, this affectionate documentary features devotees John Waters and Guy Maddin kneeling at the Kuchar alter, as well as interviews with less obvious acolytes like Atom Egoyan and Buck Henry. Best Documentary, 2009 Chicago Underground Film Festival. 2009 SXSW, Telluride, Vancouver Film Festivals.

film. It’s a sort of road movie, with two kids heading into the big city on a quest and meeting a rogue’s gallery of characters along the way. In American movies this never feels plausible, the idea of a very small girl and boy wandering on their own, but Izulu Lami is set in and outside Durban, where street kids and orphans are part of the fabric. Thembi and her little brother Khwezi live in the sticks, and when their mother succumbs to an illness they are left with nothing but a reed mat woven with a sun, moon, and stars. Not knowing what else to do, Thembi heads into Durban to find the priest who had visited their village earlier to buy folk crafts. The other revelation in the film is Tshepang Mohlomi, who plays the brilliantly named Chili Bite, the 12-year-old leader of a pack of street kids. Although he’s a hustler and a tough guy, he knows that Thembi and Khwezi are no threat and invites them into his little underground kingdom. Although there are harrowing moments when naïve Thembi, doggedly determined to find the priest who can help sell her mat, puts her faith in a very bad man, and some of the kids are in the habit of glue-sniffing, the film is filled with hope and promise and wonder. Thembi, little Khwezi, and Chili Bite will stay with you long after the film ends.