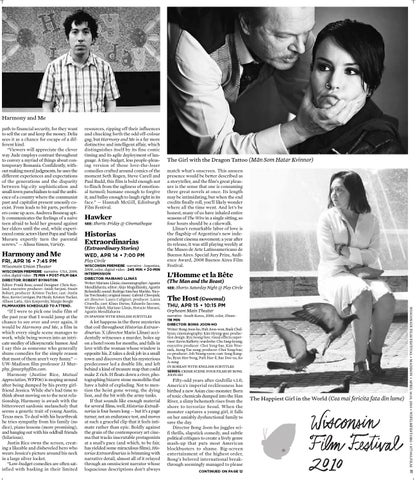 Harmony and Me path to financial security, for they want to sell the car and keep the money. Delia sees it as a chance for escape of a different kind. “Viewers will appreciate the clever way Jude employs contrast throughout to convey a myriad of things about contemporary Romania. Confidently, without making moral judgments, he uses the different experiences and expectations of the generations and the disparity between big-city sophistication and small-town parochialism to nail the ambience of a country where the communist past and capitalist present uneasily coexist. From leads to bit parts, performers come up aces. Andreea Bosneag aptly communicates the feelings of a naive teen afraid to hold her ground against her elders until the end, while experienced comic actors Haret Popa and Vasile Muraru expertly turn the parental screws.” — Alissa Simon, Variety.

“If I were to pick one indie film of the past year that I would jump at the chance to see over and over again, it would be Harmony and Me, a film in which every single scene manages to work, while being woven into an intricate medley of idiosyncratic humor. And I say this as someone who generally shuns comedies for the simple reason that most of them aren’t very funny.” — UW-Madison film professor JJ Murphy, jjmurphyfilm.com. Harmony (Justine Rice, Mutual Appreciation, WFF06) is moping around after being dumped by his pretty girlfriend Jessica. While she’s had time to think about moving on to the next relationship, Harmony is awash with the bittersweet sardonic melancholy that seems a genetic trait of young Austin, Texas men. To deal with his heartbreak he tries sympathy from his family (no dice), piano lessons (more promising), and hanging out with his oddball friends (hilarious). Justin Rice owns the screen, creating a likeable and disheveled hero who wears Jessica’s picture around his neck in a large silver locket. “Low-budget comedies are often satisfied with basking in their limited

A lot happens in the three mysteries that coil throughout Historias Extraordinarias. X (director Mario Llinas) accidentally witnesses a murder, holes up on a hotel room for months, and falls in love with the woman whose window is opposite his. Z takes a desk job in a small town and discovers that his mysterious predecessor led a double life, and left behind a kind of treasure map that could make Z rich. H floats down a river, photographing bizarre stone monoliths that have a habit of exploding. Not to mention the heist gone wrong, the dying lion, and the bit with the army tanks. If that sounds like enough material for several films, well, Historias Extradinorias is four hours long — but it’s a page turner, not an endurance test, and moves at such a graceful clip that it feels intimate rather than epic. Boldly against the grain of the contemporary art cinema that tracks inscrutable protagonists at a snail’s pace (and which, to be fair, has yielded some miraculous films), Historias Extraordinarias is brimming with narrative detail, almost all of it relayed through an omniscient narrator whose loquacious descriptions don’t always

The Girl with the Dragon Tattoo (Män Som Hatar Kvinnor) match what’s onscreen. This unseen presence would be better described as a storyteller, and the film’s great pleasure is the sense that one is consuming three great novels at once. Its length may be intimidating, but when the end credits finally roll, you’ll likely wonder where all the time went. And let’s be honest, many of us have inhaled entire seasons of The Wire in a single sitting, so four hours should be a cakewalk. Llinas’s remarkable labor of love is the flagship of Argentina’s new independent cinema movement; a year after its release, it was still playing weekly at the Museo de Arte Latinoamericano de Buenos Aires. Special Jury Prize, Audience Award, 2008 Buenos Aires Film Festival.

Fifty-odd years after Godzilla v.1.0, America’s imperial recklessness has birthed a new Asian cine-monster. Born of toxic chemicals dumped into the Han River, a slimy behemoth rises from the shore to terrorize Seoul. When the monster captures a young girl, it falls on her amiably dysfunctional family to save the day. Director Bong Joon-ho juggles scifi thrills, slapstick comedy, and subtle political critiques to create a lively genre mash-up that puts most American blockbusters to shame. Big-screen entertainment of the highest order, Bong’s beloved international breakthrough seemingly managed to please CONTINUED ON PAGE 12

resources, ripping off their influences and chucking forth the odd off-colour gag; but Harmony and Me is a far more distinctive and intelligent affair, which distinguishes itself by its fine comic timing and its agile deployment of language. A tiny-budget, less people-pleasing version of those love-the-loser comedies crafted around comics of the moment Seth Rogen, Steve Carell and Paul Rudd, this film is bold enough not to flinch from the ugliness of emotional turmoil; humane enough to forgive it; and ballsy enough to laugh right in its face.” — Hannah McGill, Edinburgh Film Festival.