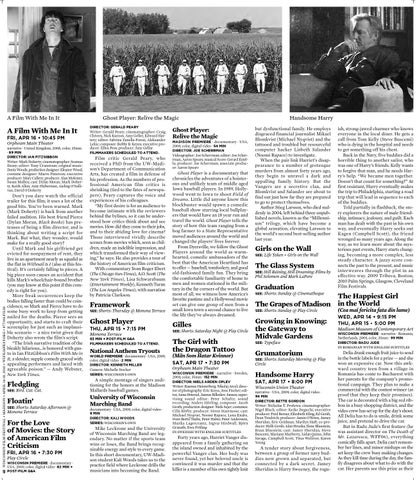 A Film With Me In It

Don’t you dare watch the official trailer for this film; it uses a lot of the good bits. You’ve been warned. Mark (Mark Doherty) is back from another failed audition. His best friend Pierce (Dylan Moran, Black Books) has pretenses of being a film director, and is thinking about writing a script for Mark. But what, they wonder, would make for a really good story? Until Mark and his girlfriend get evicted for nonpayment of rent, they live in an apartment nearly as squalid as the flat in Withnail &amp; I (also at this festival). It’s certainly falling to pieces. A big piece soon causes an accident that kills Mark’s wheelchair-bound brother (you may know at this point if this comedy is right for you). More freak occurrences keep the bodies falling faster than could be coincidence, so Mark and Pierce have to do some busy work to keep from getting nailed for the deaths. Pierce sees an opportunity, and starts to craft their screenplay for just such an implausible scenario — a nice twist given that Doherty also wrote the film’s script. “The Irish narrative tradition of the bleakly hilarious...is honored with gusto in Ian FitzGibbon’s Film With Me in It, a slender, supple comedy graced with appealing performers and laced with agreeable poison.” — Andy Webster, New York Times.

Film critic Gerald Peary, who received a PhD from the UW-Madison’s Department of Communication Arts, has created a film in defense of his profession. As the numbers of professional American film critics is shrinking (tied to the fates of newspapers), Peary captures the voice and experiences of his colleagues. “My first desire is for an audience to become intimate with the reviewers behind the bylines, so it can be understood how critics think about and see movies. How did they come to their jobs, and to their abiding love for cinema? Those interviewed vividly describe scenes from movies which, seen as children, made an indelible impression, and which transformed their way of viewing,” he says. He also provides a tour of the history of American film criticism. With commentary from Roger Ebert (The Chicago Sun-Times), A.O. Scott (The New York Times), Lisa Schwarzbaum (Entertainment Weekly), Kenneth Turan (The Los Angeles Times), with narration by Patricia Clarkson.

A simple montage of singers auditioning for the honors at the Madison Mallards baseball games.

Mike Leckrone and the University of Wisconsin Marching Band are legendary. No matter if the sports team wins or loses, the Band brings recognizable energy and style to every game. In this short documentary, UW-Madison student Kali Woods takes us to the practice field where Leckrone drills the musicians into becoming the Band.

Ghost Player is a documentary that chronicles the adventures of a boisterous and unlikely team of middle aged Iowa baseball players. In 1989, Hollywood went to Iowa to shoot Field of Dreams. Little did anyone know this blockbuster would spawn a comedic baseball show starring local ballplayers that would have an 18 year run and travel the world. Ghost Player tells the story of how this team ranging from a hog farmer to a State Representative moved audiences around the world and changed the players’ lives forever. From Dyersville, we follow the Ghost Players around the world as warmhearted, comedic ambassadors of the best that the American Heartland has to offer — baseball, tomfoolery, and good old-fashioned family fun. They bring the comfortable familiarity of home to men and women stationed in the military in the far corners of the world. But most of all, we witness how America’s favorite pastime and a Hollywood movie set can give one group of men from a small Iowa town a second chance to live the life they’ve always dreamed.

Forty years ago, Harriet Vanger disappeared from a family gathering on the island owned and inhabited by the powerful Vanger clan. Her body was never found, yet her beloved uncle is convinced it was murder and that the killer is a member of his own tightly knit

Handsome Harry but dysfunctional family. He employs disgraced financial journalist Mikael Blomkvist (Michael Nyqvist) and the tattooed and troubled but resourceful computer hacker Lisbeth Salander (Noomi Rapace) to investigate. When the pair link Harriet’s disappearance to a number of grotesque murders from almost forty years ago, they begin to unravel a dark and appalling family history. But the Vangers are a secretive clan, and Blomkvist and Salander are about to find out just how far they are prepared to go to protect themselves. Author Stieg Larsson, who died suddenly in 2004, left behind three unpublished novels, known as the “Millennium” trilogy, which have become a global sensation, elevating Larsson to the world’s second best-selling author last year.

Girls on the Wall

ish, strong-jawed charmer who knows everyone in the local diner. He gets a call from Tom Kelly (Steve Buscemi) who is dying in the hospital and needs to get something off his chest. Back in the Navy, five buddies did a horrible thing to another sailor, who was one of Harry’s friends. Kelly wants to forgive that man, and he needs Harry’s help. “We became men together. Doesn’t that count for something?” At first resistant, Harry eventually makes the trip to Philadelphia, starting a road trip that will lead in sequence to each of the buddies. Told partially in flashback, the story explorers the nature of male friendship, intimacy, jealousy, and guilt. Each man has dealt with the past in his own way, and eventually Harry seeks out Kagen (Campbell Scott), the friend wronged so many years ago. Along the way, as we learn more about the mysterious past events, Harry starts changing, becoming a more complex, less steady character. A jazzy score connects the past to the present, and music interweaves through the plot in an effective way. 2009 Tribeca, Boston; 2010 Palm Springs, Glasgow, Cleveland Film Festivals.

The Happiest Girl The Grapes of Madison in the World SEE: Shorts: Sunday @ Play Circle

Growing in Knowing: the Gateway to Midvale Gardens

Delia drank enough fruit juice to send in the bottle labels for a prize — and she won an expensive car. Now this awkward country teen from a village in Romania has come to Bucharest with her parents for the company’s promotional campaign. They plan to make a commercial with the contest winner (as proof that they keep their promises). The car is decorated with a big red ribbon in a busy shopping district, and the video crew has set up for the day’s shoot. All Delia has to do is smile, drink some juice, and pretend to drive the car. But in Radu Jude’s first feature (he was assistant director on The Death of Mr. Lazarescu, WFF06), everything comically falls apart. Delia can’t remember her lines, and minor mishaps on the set keep the crew busy making changes. As they kill time during the day, the family disagrees about what to do with the car. Her parents see this prize as their

A tender story about forgiveness, between a group of former navy buddies now grown and separated, but connected by a dark secret. Jamey Sheridan is Harry Sweeney, the rogu-