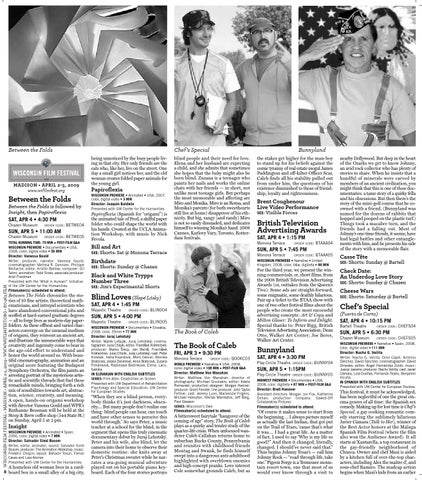 Between The Folds chronicles the stories of 10 fine artists, theoretical mathematicians, and intrepid scientists who have abandoned conventional jobs and scoffed at hard-earned graduate degrees — all to forge lives as modern-day paperfolders. As these offbeat and varied characters converge on the unusual medium of origami, they reinvent an ancient art, and illustrate the innumerable ways that creativity and ingenuity come to bear in the age-old effort to understand and honor the world around us. With beautiful cinematography, animation and an original score featuring the Budapest Symphony Orchestra, the film paints an arresting portrait of the mysterious artistic and scientific threads that fuel these remarkable minds, bringing forth a rich mix of sensibilities towards art, abstraction, science, creativity, and meaning. A open, hands-on origami workshop with director Vanessa Gould and WPR&#39;s Ruthanne Bessman will be held at the Steep &amp; Brew coffee shop (544 State St.) on Sunday, April 5 at 2 pm.

A homeless old woman lives in a card-

8 board box in a small alley of a big city,

being unnoticed by the busy people living in that city. Her only friends are the cats who, like her, live on the street. One day a small girl notices her, and the old woman creates folded paper animals for the young girl.

Director: Joaquin Baldwin Presented with UW Center for the Humanities.

Papiroflexia (Spanish for “origami”) is the animated tale of Fred, a skilful paper folder who could shape the world with his hands. Created at the UCLA Animation Workshop, with music by Nick Fevola.

blind people and their need for love. Elena and her husband are expecting a child, and she admits that sometimes she hopes that the baby might also be born blind. Zuzana is a teenager who paints her nails and works the online chats with her friends — in short, not unlike most teenage girls. But perhaps the most memorable and affecting are Miro and Monika. Miro is an Roma, and Monika’s parents (for both sweethearts still live at home) disapprove of his ethnicity. But big, rangy (and randy) Miro is not so easily dissuaded, and dedicates himself to winning Monika’s hand. 2008 Cannes, Karlovy Vary, Toronto, Rotterdam festivals.

The Book of Caleb

“When they see a blind person, everybody thinks it’s just darkness, obscurity.... But many people don’t realize one thing: blind people can hear, can touch and have other senses to perceive this world through.” So says Peter, a music teacher at a school for the blind, in the segment that opens this truly cinematic documentary debut by Juraj Lehotský. Peter and his wife, also blind, let the camera into their home to observe their domestic routine: she knits away at Peter’s Christmas sweater while he narrates a sea-going musical adventure played out on his portable piano keyboard. Each of the four stories portrays

the stakes get higher for the man-boy to stand up for his beliefs against the comic tyranny of real estate mogul James Paddington and off-kilter Officer Scar, Caleb finds all his stability pulled out from under him, the questions of his existence diminished to those of friendship, loyalty and righteousness.

For the third year, we present the winning commercials, er, short films, from the 2008 British Television Advertising Awards (or, outtakes from the Queen’s Tivo). Some ads are straight-forward, some enigmatic, some deathly hilarious. Pair up a ticket to the BTAA show with one of two other festival films about the people who create the most successful advertising concepts: Art &amp; Copy and Milton Glaser: To Inform and Delight. Special thanks to: Peter Bigg, British Television Advertising Association; Dean Otto, Walker Art Center; Joe Beres, Walker Art Center.

A bittersweet fairytale “hangover of the coming of age” story, The Book of Caleb plays as a quirky and tender study of the quarter-life crisis. When unfocused wanderer Caleb Callahan returns home to suburban Bucks County, Pennsylvania and reunites with childhood friends Montag and Swank, he finds himself swept into a dangerous anti-adulthood highlighted with overblown enemies and high concept pranks. Love interest Cole somewhat grounds Caleb, but as

nearby Dollywood. But deep in the heart of the Ozarks we get to know Johnny, an avid rock collector who has plenty of stories to share. When he insists that a handful of minerals were carved by members of an ancient civilization, you might think that this is one of those documentaries: a tame story of a quirky fella and his obsessions. But then there’s the story of the mini-golf course that he coowned with a friend. (Bunnyland was named for the dozens of rabbits that hopped and pooped on the plastic turf.) Things took a macabre turn, and the friends had a falling out. Most of Johnny’s one-time friends, it seems, have had legal battles and other entanglements with him, and he presents his side of the story with a memorable flair.

“Of course it makes sense to start from the beginning…. I always picture myself as actually the last Indian, that got put on the Trail of Tears, ‘cause that’s what it was…. I had a great life. As a matter of fact, I used to say ‘Why is my life so good?” And then it changed, literally, changed. I should’ve never said that.” Thus begins Johnny Tesar’s — call him Johnny Rock — “road through life, take one.” Pigeon Forge is a Tennessee mountain resort town, one that most of us would ever know through a visit to

This festival, it must be acknowledged, has been neglectful of one the great cinema genres of all time: the Spanish sex comedy. Making up for lost time is Chef ’s Special, a gay cooking romantic comedy starring the sublimely hilarious Javier Cámara (Talk to Her), winner of the Best Actor honors at the Málaga Spanish Film Festival (where the film also won the Audience Award). It all starts at Xantarella, a top restaurant in the gay-friendly neighborhood of Chueca. Owner and chef Maxi is aided by a kitchen full of over-the-top characters, including Alex the maître d’, and sous-chef Ramiro. The madcap action begins when Maxi’s kids from an earlier