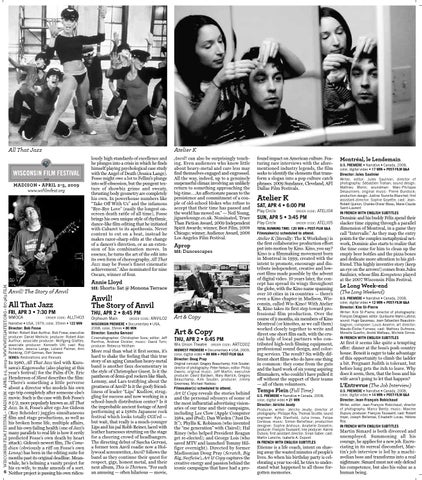 lously high standards of excellence and he plunges into a crisis in which he finds himself playing psychological case study with the Angel of Death (Jessica Lange). Fosse might owe a lot to Fellini’s plunge into self-obsession, but the pungent texture of showbiz grime and sweaty, thrusting body geometry are completely his own. In powerhouse numbers like “Take Off With Us” and the infamous “Bye-Bye Love” (easily the longest onscreen death rattle of all time), Fosse brings his own unique style of rhythmic, dance-like film editing that he initiated with Cabaret to its apotheosis. Never content to cut on a beat, instead he makes razor-sharp edits at the change of a dancer’s direction, or as an extension of his combination moves. In essence, he turns the art of the edit into its own form of choreography. All That Jazz may be Fosse’s finest cinematic achievement.” Also nominated for nine Oscars, winner of four.

Anvil! can also be surprisingly touching. Even audiences who know little about heavy-metal and care less may find themselves engaged and engrossed. All the way, indeed, up to a genuinely suspenseful climax involving an unlikely return to something approaching the big-time.…An affectionate paean to the persistence and commitment of a couple of old-school blokes who refuse to accept that their time has passed and the world has moved on.” — Neil Young, jigsawlounge.co.uk. Nominated, Truer Than Fiction Award, 2009 Independent Spirit Awards; winner, Best Film, 2008 Chicago; winner, Audience Award, 2008 Los Angeles Film Festival.

Anvil! The Story of Anvil

In 1980, All That Jazz tied with Kurosawa’s Kagemusha (also playing at this year’s festival) for the Palm d’Or. Eric Henderson of Slant describes the film: “There’s something a little perverse about a director who models his own ego trip completely after someone else’s movie. Such is the case with Bob Fosse’s 8 1/2, more popularly known as All That Jazz. In it, Fosse’s alter ego Joe Gideon (Roy Scheider) juggles simultaneous film and stage productions, as well as his broken home life, multiple affairs, and his own failing health (one of Jazz’s many parallels to real life is how it eerily predicted Fosse’s own death by heart attack). Gideon’s newest film, The Comedian (obviously a riff on Fosse’s own Lenny) has been in the editing suite for months past its original deadline. Meanwhile, he’s helming a vanity project for his ex-wife, to make amends of a sort. 6 Neither project is passing his own ridicu-

More real than what it first seems, it’s hard to shake the feeling that this true story of an aging Canadian heavy-metal band is another faux documentary in the style of Christopher Guest. Is it the pantheon of demi-god rockers like Slash, Lemmy, and Lars testifying about the greatness of Anvil? Is it the goofy friendliness of leader “Lips” Kudlow, struggling for success and now working in a school-lunch distribution center? Is it the improbable ancient footage of Anvil performing at a 1980s Japanese rock festival which looks totally CGI’ed — but wait, that really is a much-younger Lips and his pal Robb Reiner, laced with leather harnesses strutting on the stage for a cheering crowd of headbangers. The directing debut of Sascha Gervasi, a former teen Anvil roadie now a Hollywood screenwriter, Anvil! follows the band as they continue their quest for respect, gigs, honest metal, and their next album, This is Thirteen. “For such an amusing — often hilarious — movie,

Art &amp; Copy reveals the stories behind and the personal odysseys of some of the most influential advertising visionaries of our time and their campaigns, including Lee Clow (Apple Computer 1984, and iPod); Dan Wieden (“Just Do It”); Phyllis K. Robinson (who invented the “me generation” with Clairol); Hal Riney (who helped President Reagan get re-elected); and George Lois (who saved MTV and launched Tommy Hilfiger overnight). Directed by former Madisonian Doug Pray (Scratch, Big Rig, Surfwise), Art &amp; Copy captures the creative energy and passion behind the iconic campaigns that have had a pro-

Atelier K (literally: The K Workshop) is the first collaborative production effort put into motion by Kino. Kino, you say? Kino is a filmmaking movement born in Montreal in 1999, created with the intent to promote, encourage and distribute independent, creative and lowcost films made possible by the advent of digital video. 10 years later, the concept has spread its wings throughout the globe, with the Kino name spanning over 50 cities in 14 countries — there’s even a Kino chapter in Madison, Wisconsin, called Wis-Kino! With Atelier K, Kino takes its first step toward professional film production. Over the course of 9 months, six members of Kino Montreal (or kinoïtes, as we call them) worked closely together to write and direct one short film each, with the crucial help of local partners who contributed high-tech filming equipment, professional sound design, and coloring services. The result? Six wildly different short films who do have one thing in common: they come from the guts and the hard work of six young aspiring filmmakers, who couldn’t have pulled it off without the support of their teams — all of them volunteers.

Etienne is a life coach, intent on shaving away the wasted minutes of people’s lives. So when his birthday party is celebrating a year too old, he tries to understand what happened to all those forgotten memories.

Dominic and his buddy Félix spend their slacker time zipping through a parallel dimension of Montreal, in a game they call “Intervalle.” As they map the entry points for the complex metaphysical network, Dominic also starts to realize that the time come for him to clean up the empty beer bottles and the pizza boxes and dedicate more attention to his girlfriend. This highly inventive story (keep an eye on the arrows!) comes from Jules Saulnier, whose film Kompetenz played at the 2007 Wisconsin Film Festival.

At first it seems like quite a tempting offer: dinner at the boss’s posh country house. Benoit is eager to take advantage of this opportunity to climb the ladder a bit. Pregnant Judith is tolerant, but before long gets the itch to leave. Why does it seem, then, that the boss and his wife aren’t going to let that happen?

Martin Simard is both divorced and unemployed. Summoning all his courage, he applies for a new job. Excruciating in its surreal discomfort, Martin’s job interview is led by a machiavelian boss and transforms into a real nightmare. Simard must not only defend his competence, but also his value as a human being.