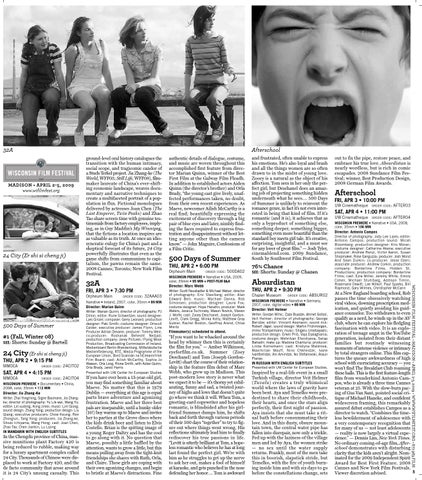 ground-level oral history catalogues the transition with the human intimacy, social scope, and tragicomic candor of a Studs Terkel project. Jia Zhang-ke (The World, WFF05; Still Life, WFF08), filmmaker laureate of China’s ever-shifting economic landscape, weaves documentary and narrative techniques to create a multifaceted portrait of a population in flux. Fictional monologues delivered by actresses Joan Chen (The Last Emperor, Twin Peaks) and Zhao Tao share screen time with genuine testimonials from factory employees, implying, as in Guy Maddin’s My Winnipeg, that the fictions a location inspires are as valuable as its truth. At once an idiosyncratic eulogy for China’s past and a skeptical forecast of its future, 24 City powerfully illustrates that even as the game shifts from communism to capitalism, the pawns remain the same. 2008 Cannes; Toronto; New York Film Festival.

In the Chengdu province of China, massive munitions plant Factory 420 is being reduced to rubble, making way for a luxury apartment complex called 24 City. Thousands of Chinese were displaced to work at Factory 420, and the de facto community that arose around it is 24 City’s unsung casualty. This

If you have ever been a 13-year-old girl, you may find something familiar about Maeve. No matter that this is 1979 Dublin — everything at this age is equal parts brave adventure and agonizing frustration. Maeve and her three best pals are inseparable, until a hunky older (16!) boy warms up to Maeve and invites her to parties at the Grove disco where the kids drink beer and listen to Elvis Costello. Brian is the spitting image of a young Roger Daltry and has the cool to go along with it. No question that Maeve, possibly a little baffled by the attention, wants to grow a little, but this means pulling away from the tight-knit friendships she shares with Ruth, Orla, and Claire. These girls are coping with their own agonizing changes, and begin to bristle at Maeve’s distractions. Fine

“If you want to be whacked around the head by whimsy then this is certainly the film for you.” — Amber Wilkinson, eyeforfilm.co.uk. Summer (Zoey Deschanel) and Tom (Joseph GordonLevitt) chart the course of their relationship in the feature film debut of Marc Webb, who grew up in Madison. This post-modern love story is never what we expect it to be — it’s thorny yet exhilarating, funny and sad, a twisted journey of highs and lows that doesn’t quite go where we think it will. When Tom, a greeting-card copywriter and hopeless romantic, is blindsided after his girlfriend Summer dumps him, he shifts back and forth through various periods of their 500 days “together” to try to figure out where things went wrong. His reflections ultimately lead him to finally rediscover his true passions in life. “Levitt is utterly brilliant at Tom, a hopeless romantic who believes he has at long last found the perfect girl. We’re with him as he struggles to get up the nerve to ask her out, makes a fool of himself at karaoke, and gets punched in the nose defending her honor…. Tom is awkward

Inspired by a real-life event in a small Turkish village, director Veit Helmer (Tuvalu) creates a truly whimsical world where the laws of gravity have been bent. Aya and Temelko were predestined to share their childhoods, their hearts, and once the stars align perfectly, their first night of passion. Aya insists that she must take a ritual bath before consummating their love. And in this dusty, obsure mountain town, the central water pipe has fallen into disrepair, now only a trickle. Fed up with the laziness of the village men and led by Aya, the women strike — no sex until the water supply returns. Frankly, most of the men take this in boorish, slapstick stride, but Temelko, with the fire of youth burning inside him and with six days to go before the constellations change, sets

and frustrated, often unable to express his emotions. He’s also loyal and brash and all the things women are so often drawn to in the midst of young love. Zooey is a natural as the object of his affection. Tom sees in her only the perfect girl, but Deschanel does an amazing job of projecting something hidden underneath what he sees.… 500 Days of Summer is unlikely to reinvent the romance genre, in fact it’s not even interested in being that kind of film. If it’s romantic (and it is), it achieves that as only a byproduct of something else, something deeper, something bigger, something even more beautiful than the standard boy meets girl tale. It’s creative, surprising, insightful, and a must see for any lover of great film.” — Josh Tyler, cinemablend.com. 2009 Sundance, South by Southwest Film Festival.

authentic details of dialogue, costume, and music are woven throughout this accomplished first feature from director Marian Quinn, winner of the Best First Film at the Galway Film Fleadh. In addition to established actors Aiden Quinn (the director’s brother) and Orla Brady, “the young cast give lively, unaffected performances taken, no doubt, from their own recent experiences. As Maeve, newcomer Ailish McCarthy is a real find; beautifully expressing the excitement of discovery through a big pair of blue eyes and later, nimbly finding the faces required to express frustration and disappointment without letting anyone other than the camera know.” — John Maguire, Confessions of a Film Critic.

At a New England boarding school, Rob passes the time obsessively watching viral videos, downing prescription medication, and quietly avoiding his guidance counselor. Too withdrawn to even qualify as a nerd, he winds up in the AV club, where he can explore his fledgling fascination with video. It is an exploration of teenage angst in the YouTube generation, isolated from their distant families but routinely witnessing moments of intense violence or intimacy by total strangers online. This film captures the queasy awkwardness of high school with excruciating accuracy — you won’t find The Breakfast Club roaming these halls. This is the first feature-length film from wunderkind Antonio Campos, who is already a three time Cannes veteran at 25. With the slow-burn pacing of Gus Van Sant, pointed social critique of Michael Haneke, and confident widescreen framing, this remarkably assured debut establishes Campos as a director to watch. “Combines the timeless bewilderment of adolescence with a very contemporary recognition that for many of us — not least adolescents — reality is now largely a virtual experience.” — Dennis Lim, New York Times. No ordinary coming-of-age film, Afterschool demonstrates with disturbing clarity that the kids aren’t alright. Nominated for the 2009 Independent Spirit Award for Best First Feature. 2008 Cannes and New York Film Festivals. 5 Viewer discretion advised.