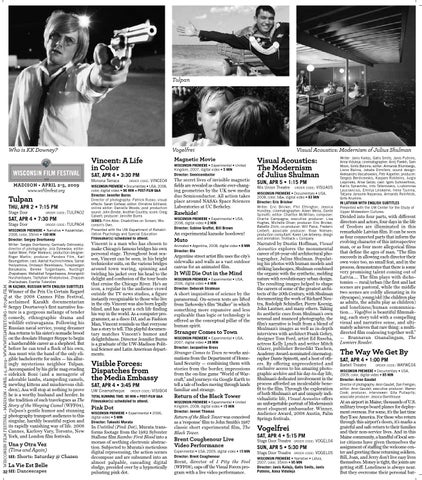 Who is KK Downey?

Vincent: A Life in Color

Vincent is a man who has chosen to make Chicago’s famous bridges his own personal stage. Throughout boat season, Vincent can be seen, in his bright technicolor suits, on the various bridges around town waving, spinning and twirling his jacket over his head to the delight and confusion of the tour boats that cruise the Chicago River. He’s an icon, a regular in the audience crowd outside the TV news studios, a figure instantly recognizable to those who live in the city. Vincent was also born legally blind, and has spent a rich life finding his way in the world. As a computer programmer, as a disco DJ, and as Fashion Man, Vincent reminds us that everyone has a story to tell. This playful documentary matches Vincent’s humor and delightfulness. Director Jennifer Burns is a graduate of the UW-Madison Political Science and Latin American departments.

Winner of the Prix Un Certain Regard at the 2008 Cannes Film Festival, acclaimed Kazakh documentarian Sergey Dvortsevoy’s first narrative feature is a gorgeous mélange of tender comedy, ethnographic drama and wildlife extravaganza. Following his Russian naval service, young dreamer Asa returns to his sister’s nomadic brood on the desolate Hunger Steppe to begin a hardscrabble career as a shepherd. But before he can tend a flock of his own, Asa must win the hand of the only eligible bachelorette for miles — his alluringly mysterious neighbor Tulpan. Accompanied by his girlie mag-reading sidekick Boni (and a menagerie of adorable lambs, stampeding camels, mewling kittens and mischievous children), Asa will stop at nothing to prove he is a worthy husband and herder. In the tradition of such travelogues as The Story of the Weeping Camel (WFF04), Tulpan’s gentle humor and stunning photography transport audiences to this singular, harshly beautiful region and its rapidly vanishing way of life. 2008 Cannes, Karlovy Vary, Toronto, New York, and London film festivals.

Argentine street artist Blu uses the city’s sidewalks and walls as a vast outdoor canvas for an animated film.

It Will Die Out in the Mind WISCONSIN PREMIERE • Experimental • USA, 2006, digital video • 4 MIN

A short inquisition of science by the paranormal. On-screen texts are lifted from Tarkovsky’s film “Stalker” in which something more expansive and less explicable than logic or technology is offered as the conceptual pillar of the human spirit.

Stranger Comes to Town re-works animations from the Department of Homeland Security — combining them with stories from the border, impressions from the on-line game “World of Warcraft,” and journeys via Google Earth to tell a tale of bodies moving through lands familiar and strange.

Return of the Black Tower

In Untitled (Pink Dot), Murata transforms footage from the 1982 Sylvester Stallone film Rambo: First Blood into a morass of seething electronic abstraction. Subjected to Murata’s meticulous digital reprocessing, the action scenes decompose and are subsumed into an almost palpable, cascading digital sludge, presided over by a hypnotically pulsating pink dot.

Return of the Black Tower was conceived as a ‘response’ film to John Smith’s 1987 classic short experimental film, The Black Tower.

Brent, director of I Pity the Fool (WFF08), caps off the Visual Forces program with a live video performance.

Narrated by Dustin Hoffman, Visual Acoustics explores the monumental career of 98-year-old architectural photographer, Julius Shulman. Populating his photos with human models and striking landscapes, Shulman combined the organic with the synthetic, melding nature with revolutionary urban design. The resulting images helped to shape the careers of some of the greatest architects of the 20th Century, with Shulman documenting the work of Richard Neutra, Rudolph Schindler, Pierre Koenig, John Lautner, and many others. Taking its aesthetic cues from Shulman’s own sensual and nuanced photography, the film’s narrative is built from a blend of Shulman’s images as well as in-depth interviews with architect Frank Gehry, designer Tom Ford, artist Ed Ruscha, actress Kelly Lynch and writer Mitch Glazer, publisher Benedikt Taschen, Academy Award-nominated cinematographer Dante Spinotti, and a host of others. By offering unprecedented and exclusive access to his amazing photographic archive and his day-to-day life, Shulman’s dedicated involvement in the process afforded an incalculable benefit to the film. Through the exploration of both Shulman’s art and uniquely individualistic life, Visual Acoustics offers an unforgettable portrait of Modernism’s most eloquent ambassador. Winner, Audience Award, 2008 Austin, Palm Springs festivals.

Divided into four parts, with different directors and actors, four days in the life of Teodors are illuminated in this remarkable Latvian film. It can be seen as four connected parts that inform the evolving character of this introspective man, or as four more allegorical films that define the ages of man. “The film succeeds in allowing each director their own voice too, no small feat, and in the process, demonstrates that there is some very promising talent coming out of Latvia…. The film plays with dichotomies — rural/urban (the first and last scenes are pastoral, while the middle two scenes are coldly alienating in its cityscapes), young/old (the children play as adults, the adults play as children) and loneliness/human communication…. Vogelfrei is beautiful filmmaking, each story told with a compelling visual and narrative sense, and ultimately achieves that rare thing: a multidirected film coalescing together well.” — Brannavan Gnanalingam, The Lumiere Reader.

At an airport in Maine, thousands of U.S. military troops board planes for deployment overseas. For some, it’s the last time they’ll see America. For those who return through this airport’s doors, it’s marks a grateful and safe return to their families and their non-service lives. And in this Maine community, a handful of local senior citizens have given themselves the assignment of staffing the welcome center and greeting these returning soldiers. Bill, Joan, and Jerry don’t live easy lives themselves. Money is tight, the joints are getting stiff. Loneliness is always near. But they overcome their personal bat-