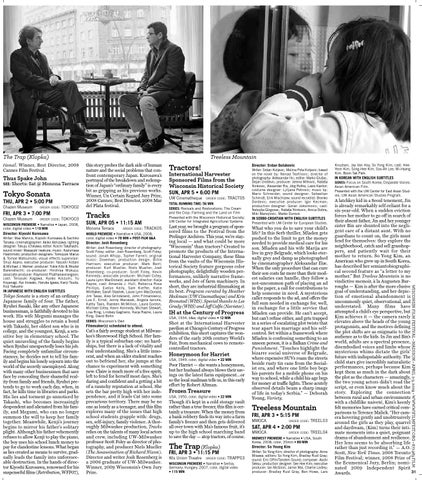 this story probes the dark side of human nature and the social problems that confront contemporary Japan. Kurosawa’s portrayal of the breakdown and redemption of Japan’s “ordinary family” is every bit as gripping as his previous works. Winner, Un Certain Regard Jury Prize, 2008 Cannes; Best Director, 2008 Mar del Plata festival.

Tokyo Sonata is a story of an ordinary Japanese family of four. The father, Ryuhei Sasaki, like any other Japanese businessman, is faithfully devoted to his work. His wife Megumi manages the house and struggles to retain a bond with Takashi, her oldest son who is in college, and the youngest, Kenji, a sensitive boy in elementary school. The quiet unraveling of the family begins when Ryuhei unexpectedly loses his job. Facing completely unfamiliar circumstances, he decides not to tell his family and begins his lonely sojourn into the world of the secretly unemployed. Along with many other businessmen that save face by concealing their shameful reality from family and friends, Ryuhei pretends to go to work each day, when, in fact, he kills time in libraries and parks. His lies and torment go unnoticed by Takashi, who becomes increasingly despondent and alienated from his family, and Megumi, who can no longer summon the will to keep her family together. Meanwhile, Kenji’s journey begins to mirror his father’s solitary plight. Although his father vehemently refuses to allow Kenji to play the piano, the boy uses his school lunch money to pay for clandestine lessons. What began as lies created as means to survive, gradually leads the family into unforeseeable destruction. In the hands of director Kiyoshi Kurosawa, renowned for his suspenseful films (Retribution, WFF07),

Cat’s a fairly average student at Milwaukee’s Shorewood High School. Her family is a typical suburban one: no hardships, but there is a lack of vitality and real understanding. She’s a little innocent, and when an older student reaches out to befriend her, she jumps at the chance to experiment with something new. Claire is much more of a free spirit, left to fend for herself most days. She’s daring and confident and a getting a bit of a raunchy reputation at school. She sets the bar pretty high with her independence, and it leads Cat into some precarious territory. There may be no one as lonely as a teenager, and this film explores many of the issues that high school students grapple with: drugs, sex, self-injury, family violence. A thoroughly Milwaukee production, Tracks relies on the talents of many local actors and crew, including UW-Milwaukee professor Scott Foley as director of photography, and producer Niels Mueller (The Assassination of Richard Nixon). Director and writer Josh Rosenberg is a 2006 graduate of UW-Milwaukee. Winner, 2009 Wisconsin’s Own Jury Prize.

TOTAL RUNNING TIME: 56 MIN SERIES: Revivals and Restorations; The Cream and the Crop: Farming and the Land on Film Presented with the Wisconsin Historical Society; UW Center for Integrated Agricultural Systems

Last year, we brought a program of sponsored films to the Festival from the Prelinger Archives. This year, we’re staying local — and what could be more “Wisconsin” than tractors? Created to promote the products of the International Harvester Company, these films from the vaults of the Wisconsin Historical Society feature gorgeous color photography, delightfully wooden performances, unlikely narrative frameworks, and lots of farm machinery. In short, they are industrial filmmaking at its best. Program curated by Heather Heckman (UW Cinematheque) and Kris Bronstad (WHS). Special thanks to Lee Grady (WHS) and Jeff Calfa (Navistar).

Shot at the International Harvester pavilion at Chicago’s Century of Progress exhibition, this short captures the wonders of the early 20th century World’s Fair, from mechanical cows to remotecontrolled tractors.

Poor Harriet — she wants a honeymoon, but her husband always blows their savings on the latest farm equipment…or so the local mailman tells us, in this early effort by Robert Altman.

Though it’s kept in a cold storage vault rather than a true freezer, this film is certainly a treasure. When the money from a bank robbery finds its way into a farm family’s freezer and then gets delivered all over town with Ma’s famous fruit, it’s up to the high school marching band to save the day — atop tractors, of course.

What who you do to save your child’s life? In this Serb thriller, Mladen gets pushed to the limit to get the money needed to provide medical care for his son. Mladen and his wife Marija are live in grey Belgrade, which looks eternally grey and damp as photographed by cinematographer Aleksandar Iliæ. When the only procedure that can cure their son costs far more than their modest salaries can handle, they follow a not-uncommon path of placing an ad in the paper, a call for contributions to help someone in need. A mysterious caller responds to the ad, and offers the full sum needed in exchange for, well, in exchange for a little service that Mladen can provide. He can’t accept, but can’t refuse either, and gets trapped in a series of escalating plot twists that tear apart his marriage and his selfcontrol. Set within a framework where Mladen is confessing something to an unseen person, it is a Balkan Crime and Punishment. “Touches highlight the bizarre social universe of Belgrade, where expensive SUVs roam the streets beside rusty tin cans from the Socialist era, and where one little boy begs his parents for a mobile phone on his way to school, while a child his age begs for money at traffic lights. These acutely observed details beam a sharp image of life in today’s Serbia.” — Deborah Young, Variety.

A latchkey kid in a Seoul tenement, Jin is already remarkably self-reliant for a six-year-old. When a sudden eviction forces her mother to go off in search of their absent father, Jin and her younger sister Bin are shunted into the negligent care of a distant aunt. With no guardians to count on, the girls must fend for themselves: they explore the neighborhood, catch and sell grasshoppers, and patiently wait for their mother to return. So Yong Kim, an American who grew up in South Korea, has described her semiautobiographical second feature as “a letter to my mother.” But Treeless Mountain is no vindictive memoir, à la Augusten Burroughs — Kim is after the more elusive goal of understanding, and her depiction of emotional abandonment is uncommonly quiet, observational, and understated. Many films have attempted a child’s eye perspective, but Kim achieves it — the camera rarely elevates above the heads of the young protagonists, and the motives defining the plot shifts are as enigmatic to the audience as to the kids. In Jin and Bin’s world, adults are a spectral presence, disembodied voices and limbs whose mysterious whims dictate the girls’ future with indisputable authority. The child stars give incredibly naturalistic performances, perhaps because Kim kept them as much in the dark about the plot as the characters — amazingly, the two young actors didn’t read the script, or even know much about the story. Exploring the connection between rural and urban environments with a childlike naiveté, Kim’s keenly felt memories have earned critical comparisons to Terence Malick. “Her camera hovering gently and unobtrusively around the girls as they play, quarrel and daydream, (Kim) turns their intimate moments into a quiet, poignant drama of abandonment and resilience. Her lens seems to be absorbing life rather than just recording it.” — A.O. Scott, New York Times. 2008 Toronto Film Festival; winner, 2008 Prize of the Ecumenical Jury, Berlin; nominated 2009 Independent Spirit 31 Awards. WISCONSIN FILM FESTIVAL • MADISON • APRIL 2-5, 2009 • WWW.WIFILMFEST.ORG • 877.963.FILM