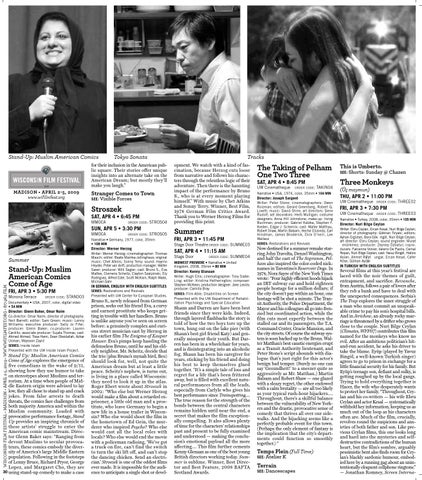 for their inclusion in the American public square. Their stories offer unique insights into an alternate take on the American Dream; but mostly they’ll make you laugh.”

opment. We watch with a kind of fascination, because Herzog cuts loose from narrative and follows his characters through the relentless logic of their adventure. Then there is the haunting impact of the performance by Bruno S., who is at every moment playing himself.” With music by Chet Atkins and Sonny Terry. Winner, Best Film, 1978 German Film Critics Award. Thank you to Werner Herzog Films for providing this print.

Stand Up: Muslim American Comics Come of Age explores the emergence of five comedians in the wake of 9/11, showing how they use humor to take on stereotypes about Muslims and terrorism. At a time when people of Middle Eastern origin were advised to lay low, they all chose to stand up and crack jokes. From false arrests to death threats, the comics face challenges from both majority America and within the Muslim community. Loaded with provocative performance footage, Stand Up provides an inspiring chronicle of these artists’ struggle to enter the American comic mainstream. Director Glenn Baker says: “Ranging from devout Muslims to secular provocateurs, these comics embody the diversity of America’s large Middle Eastern population. Following in the footsteps of Lenny Bruce, Richard Pryor, George Lopez, and Margaret Cho, they are 30 using stand-up comedy to make a case

Bruno S., newly released from German prison, seeks out his friend Eva, a curvy and earnest prostitute who keeps getting in trouble with her handlers. Bruno is unlike anyone you’ve seen on screen before: a genuinely complex and curious street musician cast by Herzog in his earlier film The Enigma of Kaspar Hauser. Eva’s pimps keep hassling the defenseless Bruno, until he and his elderly neighbor, Mr. Scheitz, decide that the trio (plus Bruno’s mynah bird, Beo) should look for, well, not quite the American dream but at least a little peace. Scheitz’s nephew, is turns out, is living in a place called Wisconsin: they need to look it up in the atlas. Roger Ebert wrote about Stroszek in 2002: “Who else but Werner Herzog would make a film about a retarded exprisoner, a little old man and a prostitute, who leave Germany to begin a new life in a house trailer in Wisconsin? Who else would shoot the film in the hometown of Ed Gein, the murderer who inspired Psycho? Who else would cast all the local roles with locals? Who else would end the movie with a policeman radioing, ‘We’ve got a truck on fire, can’t find the switch to turn the ski lift off, and can’t stop the dancing chicken. Send an electrician.’ Stroszek is one of the oddest films ever made. It is impossible for the audience to anticipate a single shot or devel-

Shaun and Darren are have been best friends since they were kids. Indeed, through layered flashbacks the story is told of how the two boys tore up the town, hung out on the lake pier (with Shaun’s best girl friend Katy) and generally misspent their youth. But Darren has been in a wheelchair for years, and is disintegrating into an alcoholic fog. Shaun has been his caregiver for years, sticking by his friend and doing his best to keep themselves glued together. “It’s a simple tale of loss and regret for a life that’s been frittered away, but is filled with excellent natural performances from all the leads, especially from Carlyle who gives his best performance since Trainspotting.... The true reason for the strength of the bonds between the central characters remains hidden until near the end, a secret that makes the film exceptionally compelling. It also allows plenty of time for the characters’ relationships past and present to be fully examined and understood — making the conclusion’s emotional payload all the more affecting.... This film further cements Kenny Glenaan as one of the best young British directors working today. Summer is sublime. Winner, Best Director and Best Feature, 2008 BAFTA Scotland Awards.

The Taking of Pelham One Two Three

Now destined for a summer remake starring John Travolta, Denzel Washington, and half the cast of The Sopranos, Pelham also inspired the color-coded nicknames in Tarentino’s Reservoir Dogs. In 1974, Nora Sayre of the New York Times wrote: “Four highly efficient hoods hijack an IRT subway car and hold eighteen people hostage for a million dollars; if the city doesn’t pay within an hour, one hostage will be shot a minute. The Transit Authority, the Police Department, the Mayor and his colleagues all go into frenzied but coordinated action, while the film cuts most expertly between the stalled car and its passengers, the T.A. Command Center, Gracie Mansion, and the city streets. Of course the subway system is soon backed up to the Bronx. Walter Matthau’s best caustic energies erupt as a Transit Authority lieutenant, and Peter Stone’s script abounds with dialogue that’s just right for this actor’s benign bad temper. (Surely no one can say ‘Gesundheit!’ to a sneezer quite so aggressively as Mr. Matthau.) Martin Balsam and Robert Shaw — one glazed with a sleazy regret, the other endowed with a calm brutality — are all too likely as your typical rush-hour hijackers…. Throughout, there’s a skillful balance between the vulnerability of New Yorkers and the drastic, provocative sense of comedy that thrives all over our sidewalks. And the hijacking seems like a perfectly probable event for this town. (Perhaps the only element of fantasy is the implication that the city’s departments could function so smoothly together.) “

Several films at this year’s festival are laced with the noir themes of guilt, entrapment, and sacrifice. Revanche, from Austria, follows a pair of lovers after they rob a bank and have to deal with the unexpected consequences. Serbia’s The Trap explores the inner struggle of a man who must commit an unspeakable crime to pay his son’s hospital bills. And in Jerichow, an already rocky marriage is threatened by a drifter who grows close to the couple. Nuri Bilge Ceylan (Climates, WFF07) contributes this film named for the monkeys who know no evil. After an ambitious politician’s hitand-run accident, he asks his driver to take the blame. Eyüp (played by Yavuz Bingöl, a well-known Turkish singer) agrees to go to prison in exchange for a little financial security for his family. But Eyüp’s teenage son, defiant and sulky, is getting roughed up by the local gangs. Trying to hold everything together is Hacer, the wife who desperately wants to protect her family. “Throughout, Ceylan and his co-writers — his wife Ebru Ceylan and actor Kesal — systematically withhold key information, keeping us as much out of the loop as his characters often are. Much of the film, crucially, revolves round the suspicions and anxieties of both father and son. Like previous Ceylan films, this one looks long and hard into the mysteries and selfdestructive contradictions of the human heart, but the film’s sombre, arguably pessimistic bent also finds room for Ceylan’s blackly sardonic humour, embodied here by a running gag about an unintentionally eloquent cellphone ringtone.” — Jonathan Romney, Screen Interna-