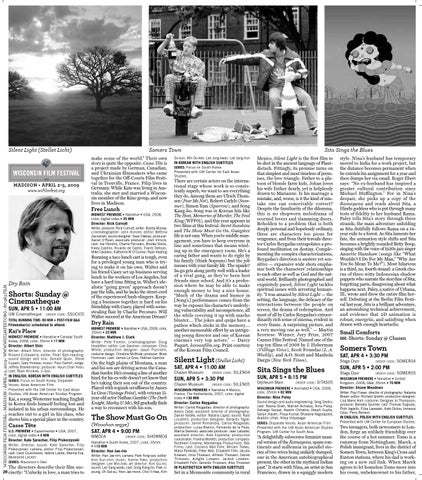 Somers Town make sense of the world.” Their own story is quite the opposite. Casse Tête is a project made by German, Canadian, and Ukrainian filmmakers who came together for the Off-Courts Film Festival in Trouville, France. Filip lives in Germany. While Kate was living in Australia, she met and married a Wisconsin member of the Kino group, and now lives in Madison.

Running a taco lunch cart is tough, even for a privileged young man who is trying to make it on his own. Walter and his friend Casey set up business serving lunch to the workers of Los Angeles, but have a hard time fitting in. Walter’s idealistic “going green” approach doesn’t pay the bills, and he lacks the street-cred of the experienced hash-slingers. Keeping a business together is hard on his friendship with Casey, played with scenestealing flair by Charlie Pecoraro. Will Walter succeed at the American Dream?

Kai, a young Westerner teaching English in Korea finds himself feeling lost and isolated in his urban surroundings. He reaches out to a girl in his class, who shows him a special place in the country.

The directors describe their film suc-

28 cinctly: “Unlucky in love, a man tries to

On the high plains of Montana, a man and his son are driving across the Canadian border. He’s crossing a line of another kind, for his ex-wife doesn’t yet know that he’s taking their son out of the country. Played with roguish scruffiness by James Le Gros (Vantage Point), with veteran 11year-old actor Nathan Gamble (The Dark Knight, Marley &amp; Me), Stil gradually finds a way to reconnect with his son.

There are certain actors on the international stage whose work is so consistently superb, we want to see everything they do. Among them are Ulrich Thomsen (Fear Me Not), Robert Carlyle (Summer), Simon Yam (Sparrow), and Song Kang-ho. Song was in Korean hits like The Host, Memories of Murder, The Foul King (WFF01), and this year appears in two films at this festival: Secret Sunshine and The Show Must Go On. Gangster life is not easy. When you’re middle management, you have to keep everyone in line and sometimes that means winding up in the emergency room. He’s a caring father and wants to do right by his family (think Soprano) but the job messes with your family life. The upside? In-gu gets along pretty well with a leader of a rival gang, as they’ve been best friends since school. And it’s a profession where he may be able to make enough money to buy a nice house. “Much of the drama and humor in [Song’s] performance comes from the way he exposes his character’s underlying vulnerability and incompetence, all the while covering it up with macho bluster.... The jokes and quips have a pathos which sticks in the memory.... another memorable effort by an intriguing young director and one of Korean cinema’s very top actors.” — Darcy Paquet, koreanfilm.org. Print courtesy of the Korean Film Council.

style. Nina’s husband has temporary moved to India for a work project, but the distance becomes permanent when he extends his assignment for a year and then dumps her via email. Roger Ebert says: “No ex-husband has inspired a greater cultural contribution since Michael Huffington.” For in Nina’s despair, she picks up a copy of the Ramayana and reads about Sita, a Hindu goddess who is put through many tests of fidelity to her husband Rama. Paley tells Sita’s story through three strands, the main adventure unfolding as Sita dutifully follows Rama on a 14year exile to a forest. As Sita laments her fate, the animation style shifts and Sita becomes a brightly rounded Betty Boop, singing with the voice of 1920s jazz singer Annette Hanshaw (songs like “What Wouldn’t I Do For My Man,” “Why Are You So Mean To Me?”). Most hilarious is a third, no, fourth strand: a Greek chorus of three witty Indonesian shadow puppets who narrate the storyline of Sita, forgetting parts, disagreeing about what happens next. Paley, a native of Urbana, Ill., wrote and drew the entire film herself. Debuting at the Berlin Film Festival last year, Sita is a brilliant adventure, an astonishing technical achievement, and evidence that 2D animation is robust, energetic, and satisfying when drawn with enough heartache.

Mexico, Silent Light is the first film to be shot in the ancient language of Plautdietsch. Fittingly, its premise turns on that simplest and most timeless of premises, the love triangle. Father to a platoon of blonde farm kids, Johan loves his wife Esther dearly, yet is helplessly drawn to Marianne. Is his marriage a mistake, and, worse, is it the kind of mistake one can conceivably correct? Despite the familiarity of the dilemma, this is no shopworn melodrama of scorned lovers and slamming doors. Beholden to a problem that is both deeply personal and hopelessly ordinary, these are characters too pious for vengeance, and from their travails director Carlos Reygadas extrapolates a profound meditation on destiny. Complementing the complex characterizations, Reygadas’s direction is austere yet sensitive — expansive wide shots emphasize both the characters’ relationships to each other as well as God and the natural world. Brilliantly photographed and exquisitely paced, Silent Light tackles spiritual issues with arresting humanity. “I was amazed by Silent Light — the setting, the language, the delicacy of the interactions between the people on screen, the drama of redemption. And most of all by Carlos Reygadas’s extraordinarily rich sense of cinema, evident in every frame. A surprising picture, and a very moving one as well.” — Martin Scorsese. Winner, Jury Prize, 2007 Cannes Film Festival. Named one of the top ten films of 2008 by J. Hoberman (Villlage Voice), Scott Foundas (L. A. Weekly), and A.O. Scott and Manhola Dargis (New York Times).

Set in a Mennonite community in rural

“A delightfully subversive feminist musical version of the Ramayana, spans continents and millennia in parallel stories of two wives being unfairly dumped, one in the American autobiographical present, the other in the mythical Indian past.” It starts with Nina, an artist in San Francisco, drawn in a squiggly modern

Two teenagers, both newcomers to London, forge an unlikely friendship over the course of a hot summer. Tomo is a runaway from Nottingham; Marek, a Polish immigrant, lives in the district of Somers Town, between King’s Cross and Euston stations, where his dad is working on a new rail link. When Marek agrees to let homeless Tomo move into his room, unbeknownst to his father,