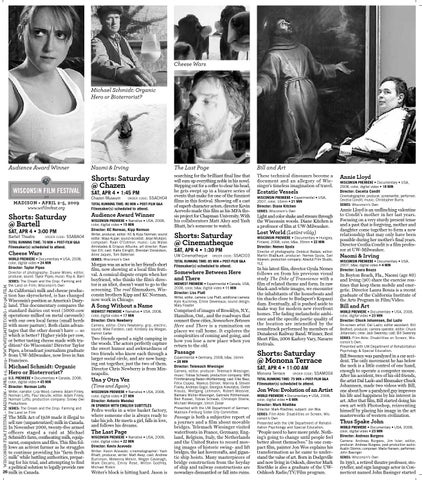 searching for the brilliant final line that will sum up everything noble in his novel. Stepping out for a coffee to clear his head, he gets swept up in a bizarre series of events that make for one of the funniest films in this festival. Showing off a cast of superb character actors, director Kevin Acevedo made this film as his MFA thesis project for Chapman University. With his collaborators Matt Akey and Yash Bhatt, he’s someone to watch.

These technical dinosaurs become a document and an allegory of Wiesinger’s timeless imagination of travel.

Director of photography: Duane Moles; editor, producer, sound: Taylor Pipes; music: Roy A. Baril SERIES: The Cream and the Crop: Farming and the Land on Film; Wisconsin’s Own

As California’s milk and cheese production has skyrocketed, is has changed Wisconsin’s position as America’s Dairyland. This documentary compares the standard dairies out west (5000-cow operations milked on metal carousels) with our own local farms (small herds with more pasture). Both claim advantages that the other doesn’t have — so which is better? Higher yields per cow, or better tasting cheese made with tradition? Go Wisconsin! Director Taylor Pipes, a broadcast journalism graduate from UW-Milwaukee, now lives in San Francisco.

Morgan was an actor in her friend’s short film, now showing at a local film festival. A comical dispute erupts when her boyfriend, who thinks the film’s director is an idiot, doesn’t want to go to the screening. The real filmmakers, Wisconsin brothers Kipp and KC Norman, now work in Chicago.

Two friends spend a night camping in the woods. The actors perfectly capture the sweet humor and awkwardness of two friends who know each through a larger social circle, and are now hanging out together, just the two of them. Director Chris Newberry is from Minneapolis.

The Milk Act of 1938 made it illegal to sell raw (unpasteurized) milk in Canada. In November 2006, twenty-five armed officers staged a raid at Michael Schmidt’s farm, confiscating milk, equipment, computers and files. This film follows an activist farmer as he struggles to continue providing his “farm fresh milk” while battling authorities, preparing for his trial, and attempting to find a political solution to legally provide raw 26 milk in Canada.

Pedro works in a wire basket factory, where someone else is always ready to take his job. He meets a girl, falls in love, and follows his dreams.

Comprised of images of Brooklyn, N.Y., Hamilton, Ont., and the roadways that connect these cities, Somewhere Between Here and There is a rumination on places we call home. It explores the complexities of coming and going, and how you lose a new place when you return to the old.

Passage is both a subjective report of a journey and a film about movable bridges. Telemach Wiesinger visited waterfronts in France, Germany, England, Belgium, Italy, the Netherlands and the United States to record moving images of historic swing- and lift bridges, the last hovercrafts, and gigantic ship hoists. Many masterpieces of bridge construction from the heyday of ship and railway constructions are nowadays dismantled or fall into ruins.

In his latest film, director Gyula Nemes follows on from his previous visual study The Dike of Transience with a film of related theme and form. In raw black-and-white images, we encounter the inhabitants of the houseboats and tin shacks close to Budapest’s Kopaszi dam. Eventually, all is pushed aside to make way for modern new riverfront homes. The fading melancholic ambience and the specific poetic quality of the location are intensified by the soundtrack performed by members of Dunakeszi Railway Band. Winner, Best Short Film, 2008 Karlovy Vary, Navarre festivals.

“People need to have more pride. Nothing’s going to change until people feel better about themselves.” In one compact film, painter Jon Wos explains his transformation as he came to understand the value of art. Born in Dodgeville and now living in Oskosh, director Mark Röethke is also a graduate of the UWOshkosh Radio/TV/Film program.

Annie Lloyd is an unflinching valentine to Condit’s mother in her last years. Focusing on a very sturdy present tense and a past that is forgiving, mother and daughter come together to form a new relationship that may only have been possible during her mother’s final years. Director Cecilia Condit is a film professor at UW-Milwaukee.

In Boyton Beach, Fla., Naomi (age 80) and Irving (90) share the exercise routines that keep them mobile and energetic. Director Laura Bouza is a recent graduate of the California Institute of the Arts Program in Film/Video.

Bill Sweeney was paralyzed in a car accident. The only movement he has below the neck is a little control of one hand, enough to operate a computer mouse. After his accident, two of his old friends, the artist Dal Lazlo and filmmaker Chuck Johannsen, made two videos with Bill, one about how a paralyzed guy improves his life and happiness by his interest in art. After that film, Bill started doing his own art with Photoshop, reinventing himself by placing his image in the art masterworks of western civilization.