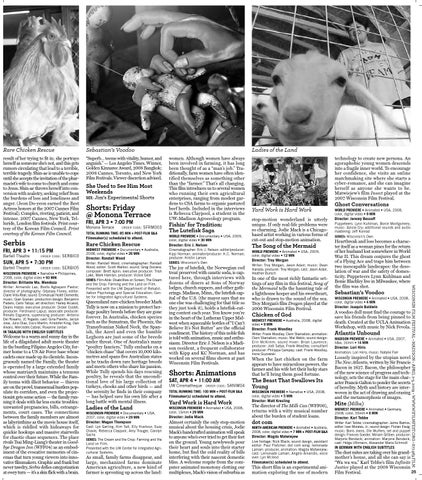 result of her trying to fit in; she portrays herself as someone she’s not, and this gets rumors circulating that lead to a terrible, terrible tragedy. Shin-ae is unable to cope until she accepts the invitation of the pharmacist’s wife to come to church and come to Jesus. Shin-ae throws herself into conversion with zealotry, seeking relief from the burdens of loss and loneliness and anger. (Jeon Do-yeon earned the Best Actress honors at the 2007 Cannes Film Festival). Complex, riveting, patient, and intense. 2007 Cannes, New York, Telluride, London film festivals. Print courtesy of the Korean Film Council. Print courtesy of the Korean Film Council.

She Used to See Him Most Weekends

Ladies of the Land

Welcome to a warm and sunny day in the life of a dilapidated adult movie theater in the bustling Filipino Angeles City, former home to a US Air Force base whose cadets once made up its clientele. Incongruously named the Family, the theater is operated by a large extended family whose matriarch maintains a tenuous control over their future. While the Family teems with illicit behavior — thieves are on the prowl, transsexual hustlers populate its corridors, and even the projectionist gets some action — the family running it deals with far less exotic troubles: unwanted pregnancies, bills, estrangements, court cases. The connections between the family members are almost as labyrinthine as the movie house itself, which is riddled with hideaways for quickie hookups and massive stairwells for chaotic chase sequences. The place rivals Tsai Ming-Liang’s theater in Goodbye Dragon Inn (WFF04) as an embodiment of the evocative memories of cinemas that turn young viewers into innovative filmmakers. Graphic and frank but never tawdry, Serbis defies categorization at every turn — it’s a skin flick with a brain.

Queensland rare-chicken breeder Mark Tully is now on a mission to protect heritage poultry breeds before they are gone forever. In Australia, chicken species such as the Sumatran, the Phoenix, the Transylvanian Naked Neck, the Spanish, the Azeel and even the humble Leghorn are just some of the breeds under threat. One of Australia’s many “poultry fanciers,” Tully embarks on a “chicken chase” that covers 10,000 kilometres and spans five Australian states as he tracks down rare heritage breeds and meets others who share his passion. While Tully spends his days rescuing poultry, he reveals that the unconditional love of his large collection of turkeys, chooks and other birds — and the serenity he finds in their company — has helped save his own life after a long battle with mental illness.

As small, family farms disappear, and large, mechanized farms dominate American agriculture, a new kind of farmer is sprouting up across the land:

technology to create new persona. An agoraphobic young women descends into a fragile inner world. To encourage her confidence, she visits an online matchmaking site where she starts a cyber-romance, and she can imagine herself as anyone she wants to be. Matwiejew’s film Insect played at the 2007 Wisconsin Film Festival.

stop-motion wonderland is utterly unique. If only real-life problems were so charming. Jodie Mack is a Chicagobased artist working in various forms of cut-out and stop-motion animation.

The Song of the Mermaid

Fishin’ for Tradition: The Lutefisk Saga

The joy of lutefisk, the Norwegian cod treat preserved with caustic soda, is captured here, through interviews with dozens of diners at Sons of Norway lodges, church suppers, and other gatherings. Madison, Minn., the lutefisk capital of the U.S. (the mayor says that no one else was challenging for that title so they just took it), holds a lutefisk-eating contest each year. You know you’re in the heart of the Lutheran Upper Midwest when squeezable bottles of “I Can’t Believe It’s Not Butter” are the official condiment. The history of this noble fish is told with animation, music and enthusiasm. Director Eric J. Nelson is a Madison resident, a frequent collaborator with Kipp and KC Norman, and has worked on several films shown at past Wisconsin Film Festivals.

Almost certainly the only stop-motion musical about the housing crisis, Jodie Mack’s handcrafted animation will speak to anyone who’s ever tried to get their feet on the ground. Young newlyweds pour their heart and souls into their starter home, but find the cold reality of bills interfering with their nascent domestic bliss. A welcome respite from the computer animated monotony clotting our multiplexes, Mack’s vision of suburbia as

In one of the most richly fantastic settings of any film in this festival, Song of the Mermaid tells the haunting tale of a lighthouse keeper and his sweetheart, who is drawn to the sound of the sea. Troy Morgan’s film Dragon played at the 2006 Wisconsin Film Festival.

When the last chicken on the farm appears to have miraculous powers, the farmer and his wife bet their lucky stars that he’ll bring them good fortune.

The director of The Milk Can (WFF06), returns with a witty musical number about the burden of student loans.

Heartbreak and loss becomes a character itself as a woman pines for the return of her husband lost somewhere in World War II. This dream conjures the ghost of a Flying Ace and traps him between two inescapable landscapes: the desolation of war and the safety of domesticity. Puppeteers Lynn Kuhlman and Bonie Blachley live in Milwaukee, where the film was shot.

A voodoo doll must find the courage to save his friends from being pinned to death. Created at the UCLA Animation Workshop, with music by Nick Fevola.

Loosely inspired by the utopian novel The New Atlantis, written by Sir Francis Bacon in 1627. Bacon, the philosopher of the new science of progress and technology, sets the stage for the main character Francis Galton to ponder the secrets of heredity. Myth and history are interwoven in the act of drawing and erasing and the metamorphosis of images.

women. Although women have always been involved in farming, it has long been thought of as a “man’s job.” Traditionally, farm women have often identified themselves as something other than the “farmer.” That’s all changing. This film introduces us to several women who running their own agricultural enterprises, ranging from modest gardens to CSA farms to organic pastured beef herds. Included in the interviews is Rebecca Claypool, a student in the UW-Madison Agroecology program.

The dust mites are taking over his grandmother’s house, and all she can say is “Wa wa wa.” Karl Tebbe’s film Infinite Justice played at the 2008 Wisconsin 25 Film Festival.