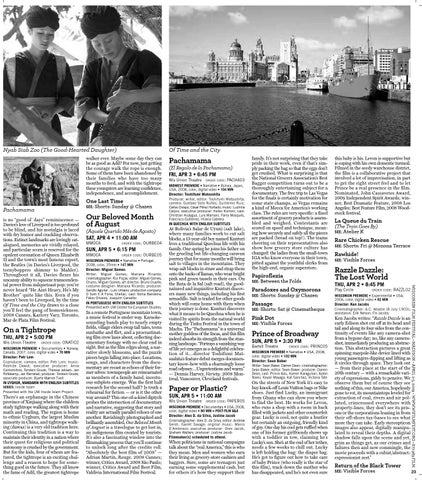 Nyab Siab Zoo (The Good-Hearted Daughter) walker ever. Maybe some day they can be as good as Adil? For now, just getting the courage walk the rope is enough. Some of them have been abandoned by their families who have too many mouths to feed, and with the tightrope these youngsters are learning confidence, independence, and accomplishment.

There’s an orphanage in the Chinese province of Xinjiang where the children study tightrope walking along with their math and reading. The region is home to ethnic Uyghurs, the largest Muslim minority in China, and tightrope walking (dawaz) is a very old tradition here. Continuing this tradition is a way to maintain their identity in a nation where their quest for religious and political autonomy is crushed by the government. But for the kids, four of whom are featured, the tightrope is an exciting challenge and a reason to hope for something good in the future. They all know the fame of Adil, the greatest tightrope

In a remote Portuguese mountain town, a music festival is under way. Karaokesounding bands play to nearly empty fields, village elders swap tall tales, teens sunbathe and flirt, and a procrastinating film crew lazes about, collecting documentary footage with no clear end in sight. But as the film edges along, a narrative slowly blossoms, and the puzzle pieces begin falling into place. Locations, songs, and characters from the documentary are recast as echoes of their former selves: townspeople are reincarnated as members of a family band, incestuous subplots emerge. Was the first half research for the second half? Is truth a rehearsal for fiction — or is it the other way around? This one-of-a-kind diptych probes the intersection of documentary and narrative, suggesting that story and reality are actually parallel echoes of one another. Ravishingly photographed and brilliantly assembled, Our Beloved Month of August is a travelogue to get lost in, an indigenous film created by tourists. It’s also a fascinating window into the filmmaking process that you’ll continue to unlock long after the credits roll. “Absolutely the best film of 2008” — Adrian Martin, Rouge. 2008 Cannes; winner, Critics Award, 2008 São Paulo; winner, Critics Award and Best Film, Valdivia International Film Festival.

At Bolivia’s Salar de Uyuni (salt lake), where many families work to cut salt blocks, a 13-year-old boy named Kunturi lives a traditional Quechua life with his family. One spring he joins his father on the grueling but life-changing caravan journey that for many months will bring salt to villages in the mountains. They wrap salt blocks in straw and strap them onto the backs of llamas, who wear bright pink and green tassels in their ears. On the Ruta de la Sal (salt road), the goodnatured and inquisitive Kunturi discovers many new things, including his first armadillo. Salt is traded for other goods which will come home with them when their journey is done. Kunturi discovers what it means to be Quechua when he is visited by spirits from the natural world during the Tinku Festival in the town of Macha. The “Pachamama” is a universal mother goddess of the Incas, and this film indeed absorbs its strength from the stunning landscape. “Portrays a vanishing way of life yet emerges as a delightful celebration of it….director Toshifumi Matsushita’s feature debut merges documentary know-how with a charmingly loose road odyssey….Unpretentious and warm.” — Dennis Harvey, Variety. 2008 Montreal, Vancouver, Cleveland festivals.

When politicians in national campaigns talk about the “real America,” this is who they mean. Men and women who earn their living as grocery-store cashiers and baggers. Sure, some are teenagers just earning some supplemental cash, but for others it’s how they support their

family. It’s not surprising that they take pride in their work, even if that’s simply packing the bag so that the eggs don’t get crushed. What is surprising is that the National Grocers Association’s Best Bagger competition turns out to be a thoroughly entertaining subject for a documentary. The free trip to Las Vegas for the finals is certainly motivation for some state champs, as Vegas remains a kind of Mecca for America’s working class. The rules are very specific: a fixed assortment of grocery products is assembled and weighed. Contestants are scored on speed and technique, meaning how securely and safely all the pieces are packed (bread on top!). The teams cheering on their representatives also show how grocery store culture has changed: the ladies from the small-town IGA who know everyone in their town, pitted against the youthful clerks from the high-end, organic superstore.

Papiroflexia SEE: Between the Folds

this baby is his. Levon is supportive but is coping with his own domestic turmoil. Filmed in the seedy warehouse district, the film is a collaborative project that involved a lot of improvisation, in part to get the right street feel and to let Prince be a real presence in the film. Nominated, John Cassavetes Award, 2009 Independent Spirit Awards; winner, Best Dramatic Feature, 2008 Los Angeles; Best Feature Film, 2008 Woodstock festival.

Return of the Black Tower

is no “good ol’ days” reminiscence — Davies’s love of Liverpool is too profound to be blind, and his nostalgia is laced with dry humor and crackling observations. Extinct landmarks are lovingly catalogued, memories are vividly relayed, and particular scorn is reserved for the opulent coronation of Queen Elizabeth II and the town’s most famous export, the Beatles (in Davies’s Liverpool, the teenyboppers shimmy to Mahler). Throughout it all, Davies flexes his uncanny ability to squeeze transcendental power from milquetoast pop: you’ve never heard “He Aint Heavy, He’s My Brother” quite like this. Even if you haven’t been to Liverpool, by the time Of Time and the City draws to a close you’ll feel the pang of homesickness. 2008 Cannes, Karlovy Vary, Toronto, Mar de Plata Film Festival.

Of Time and the City

Ken Jacobs writes: “Razzle Dazzle is an early Edison shot cut off at its head and tail and along its four sides from the continuity of events like any camera-shot from a bygone day; no, like any camerashot, immediately producing an abstraction. This abstraction pictures a great spinning maypole-like device lined with young passengers dipping and lifting as it circles through space. They look out — from their place at the start of the 20th century — with a remarkable variety of expressions, giddy to pensive. We observe them but of course they see nothing of this, our America, hopelessly gone to rot, its mountaintops leveled for extraction of coal, rivers and air polluted, crisscrossed everywhere with property-lines; they don’t see its prisons or the corporations leaning in from their off-shore tax-bases to see what more they can take. Early stereopticon images also appear, digitally manipulated to reveal their depths. A digital shadow falls upon the scene and yet, grim as things get, as our crimes and failures then and now commingle, the movie proceeds with a cubist/abstractexpressionist zest.”

On the streets of New York it’s easy to buy knock-off Louis Vuitton bags or Nike shoes. Just find Lucky, an immigrant from Ghana who can show you where to find the best. He works for Levon, who runs a shop with a room in back filled with jackets and other counterfeit gear. Lucky is cool, not quite a hustler but certainly an outgoing, friendly kind of guy. One day his cool gets ruffled when one of his former girlfriends shows up with a toddler in tow, claiming he’s Lucky’s son. She’s at the end of her tether, needs a few weeks to chill out. Lucky is left holding the bag: the diaper bag. He’s got to figure out how to take care of baby Prince (who really is the star of this film), track down the mother who has disappeared, and he’s not even sure