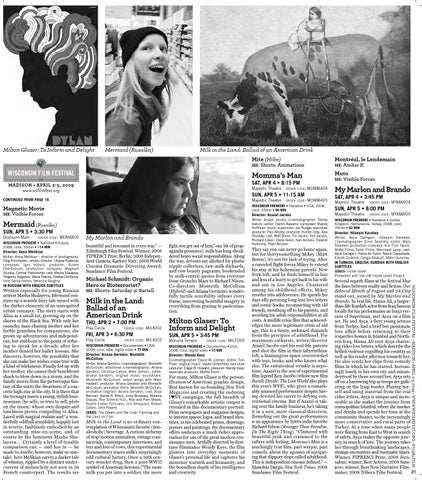 Milton Glaser: To Inform and Delight

Milk in the Land: Ballad of an American Drink Mite (Milbe)

Written especially for young Russian actress Masha Shalayeva, Mermaid conjures up a seaside fairy tale mixed with the darker elements of an unrequited urban romance. The story starts with Alisa as a small tot, growing up on the shores of the Black Sea. With only her raunchy, man-chasing mother and her feeble grandma for companions, she grows up adventurous and independent, but stubborn to the point of refusing to speak for a decade after her mother denied her ballet lessons. She discovers, however, the possibility that she can make her wishes come true with a kind of telekinesis. Finally fed up with her mother, she causes their beachfront shack to blow down in a storm, and the family moves from the picturesque fantasy of the sea to the dreariness of a concrete high-rise in the city. It is there that the teenager meets a young, stylish businessman (he sells, or tries to sell, plots on the moon) whose own despair and loneliness proves compelling to Alisa. Laced with magical realism and “a wonderfully oddball sensibility, happily lost in reverie, faultlessly embodied by an outstanding mîse-en-scene, and of course by the luminous Masha Shalayeva…. Certainly a level of tenable comparison can — and has to — be made to Amélie; however, make no mistake: here Melikian carves a darker tale of whimsy, rippled by a distinct undercurrent of melancholy not seen in its French counterpart. The results are

fight you get out of him,” one bit of propaganda promises), milk has long shouldered heavy social responsibilities. Along the way, detours are allotted for plastic nipple collectors, raw-milk diehards, and cow beauty pageants, bookended by milk-centric quotes from everyone from Groucho Marx to Richard Nixon. Co-directors Monteith McCollum (Hybrid) and Ariana Gerstein’s wonderfully tactile sensibility infuses every frame, uncovering beautiful imagery in everything from grazing to pasteurization.

Milk in the Land is no ordinary contemplation of Wisconsin’s favorite (nonalcoholic) beverage. A curious alchemy of stop-motion animation, vintage commercials, contemporary interviews, and lots and lots of cows, this experimental documentary traces milk’s surprisingly odd cultural history. Once a 19th century wonder drug, then a post-WWII symbol of American heroism (“The more milk you put into a soldier, the more

For many, Milton Glaser is the personification of American graphic design. Best known for co-founding New York Magazine and creating the enduring I♥NY campaign, the full breadth of Glaser’s remarkable artistic output is revealed in this documentary portrait. From newspapers and magazine designs, to interior spaces, logos, and brand identities, to his celebrated prints, drawings, posters and paintings, the documentary offers audiences a much richer appreciation for one of the great modern renaissance men. Artfully directed by firsttime filmmaker Wendy Keys, the film glances into everyday moments of Glaser’s personal life and captures his immense warmth and humanity, and the boundless depth of his intelligence and creativity.

They say you can never go home again, but for thirtysomething Mikey (Matt Boren), it’s not for lack of trying. After a canceled flight forces Mikey to extend his stay at his bohemian parents’ New York loft, and he finds himself in less and less of a hurry to get back to his wife and son in Los Angeles. Cloistered among his childhood effects, Mikey recedes into adolescence. He spends his days idly perusing long-lost love letters and comic books, reconnecting with old friends, mouthing off to his parents, and avoiding his adult responsibilities at all costs. A midlife crisis film that acknowledges the more legitimate crisis of old age, this is a funny, awkward dispatch from the precipice of adulthood. For maximum catharsis, writer/director Azazel Jacobs cast his real-life parents and shot the film in their labyrinthine loft, a humungous space overcrowded with toys, books, and who knows what else. The extratextual wrinkle is nepotism: Azazel is the son of experimental film legend Ken Jacobs (whose new film Razzle Dazzle: The Lost World also plays this year’s WFF), who gives a remarkably nuanced performance despite having devoted his career to defying conventional cinema. But if Azazel is taking over the family business, he’s taking it in a new, more classical direction. Rounding out the great performances is an appearance by 1980s indie favorite Richard Edson (Stranger Than Paradise, Do The Right Thing). “Cluttered with beautiful junk and crammed to the rafters with feeling, Momma’s Man is a touchingly true film, part weepie, part comedy, about the agonies of navigating that slippery slope called adulthood. This is independent cinema defined.” — Manohla Dargis, New York Times. 2008 Sundance Film Festival.

Several superb films at the festival blur the lines between reality and fiction. Our Beloved Month of August and 24 City stand out, joined by My Marlon and Brando. In real life, Hama Ali, a largerthan-life Kurdish actor from Iraq famous locally for his performance as Iraq’s version of Superman, met Ayça on a film set. He and Ayça, a fiery young actress from Turkey, had a brief but passionate love affair before returning to their respective homes in Istanbul and Northern Iraq. Hama Ali sent Ayça charming video love letters, which describe the hellish violence engulfing his country as well as his tender affection towards her. He also sends her clips from comedy films in which he has starred. Increasingly lonely in her own city and misunderstood by those around her, Ayça sets off on a harrowing trip as troops are gathering on the Iraqi border. Playing herself and using material from the real video letters, Ayça is unique and memorable as she makes the journey from cosmopolitan Istanbul, where she smokes and drinks and spends her time at the community theater, to the increasingly more conservative and rural parts of Turkey. At a time when many people were fleeing from East to West in search of safety, Ayça makes the opposite journey, in search of love. The journey takes her through breathtaking landscapes, strange encounters and traumatic times. Winner, FIPRESCI Prize, 2008 Jerusalem; winner, Best Actress, 2008 Sarajevo; winner, Best New Narrative Film21 maker, 2008 Tribeca Film Festival. WISCONSIN FILM FESTIVAL • MADISON • APRIL 2-5, 2009 • WWW.WIFILMFEST.ORG • 877.963.FILM

My Marlon and Brando